This Film Doesn’t Have a Prayer… or We Can Use the Film’s Tagline: “The End Begins” 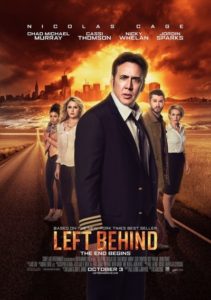 Left Behind is supposed to be the big-budget reboot of the cinematic version of the popular book series, Left Behind, by Tim LaHay and Jerry B. Jenkins.  The original film series starred Kirk Cameron as Buck Williams, a reporter who finds himself in the midst of a global event and the subsequent rise of a political leader who may or may not be the anti-Christ.  That series lasted 3 movies, each one with a smaller budget than the one before it, until the story could no longer continue. The book’s authors had been very vocal about their dislike for the first attempt of turning their novels into a film, but with the new incarnation, both are singing its praises.

While people who loved the books may take that as a promising sign, I’d caution that you should prepare to be disappointed.  Left Behind has a bigger budget, and more well known actors than the Kirk Cameron version.  Academy-Award winning actor, Nicholas Cage, joins the cast as Rayford Steele, an airline pilot who finds himself alone in the cockpit when his co-pilot and millions more around the world disappear suddenly.  What ensues with the disappearance is mass chaos.  People are rushing to the hospitals thinking their loved ones are there.  Unmanned vehicles, planes, etc. are crashing everywhere, and communication is proving impossible.

Also on the plane is world renowned reporter Buck Williams, this time played by Chad Michael Murray (Freaky Friday, One Tree Hill) who helps figure out what has happened to cause the disappearance.  He also tries to help Rayford land the plane.  On the ground dodging busses, and looters is Chloe Steele, Rayford’s daughter who is distraught having found out that her dad has possibly been seeing a flight attendant named Hattie (Nicky Whelan-Australia’s t.v. show “Neighbors“).

So here are a series of questions and answers that I can easily post before I go into a more thorough analysis:

Q: Is this movie a good adaptation of the book series? A: No.

Q: Is this a good action or disaster film that will entertain audiences?  A: No.

Q: Does this movie convince people outside the Christian faith of the possibility of the rapture? A: No.

Q: Does this film cater to 2-dimensional stereotypes and engage in exploitation of women? A: Yes.

Q: Is this film theologically sound? A: No.

I could keep going, but let’s address some of these issues.  The primary problem with this film is its desire to be a cool, adrenaline-pumping action/disaster film but not creating any plausibility of such a scenario being possible.  Tons of other films have made the seemingly impossible, at least plausible, and entertained us all: Jurassic Park, Independence Day, Snakes on a Plane(?), etc.

The question isn’t whether or not the rapture will be a real event, as much as they would like to because they create no conditions or tension to make us care about it at all.  When it happens, it isn’t a giant moment when it should be a watershed event in history.  Here, it is simply the catalyst for why Rayford Steele has to land a plane safely, and nothing more.  Loose attempts are made to explain it, but it is couched in language that only church-going believers would understand.  And like many faith-based films of the past, everything about the way this is presented is hokey, trite, and lame.  When people disappear in the rapture, clothes are neatly left in place where a person once sat, with even a person’s watch exactly where the wrist would be, and not somewhere else if it had suddenly fallen from mid-air bounced upon impact from wherever it landed.

Rayford realizes his wife and son are gone and there is basically no emotion.  The best thing Left Behind has going for it is Nicholas Cage in a role designed for him, where he can go all “Nicholas Cage” on it.  Yet here, they reduce him to an emotionless autotron who simply thinks hard for a moment and remembers how his Christian wife (Lea Thompson-Back to the Future, Red Dawn) tried to tell him about it.  It doesn’t rock his world, cut him to the quick, or challenge his main goal of trying to land the plane.  The film wants that to be the reaction for the audience but cannot even bring this kind of reaction from its characters. This remembered knowledge is simply to explain to the audience why the rapture happened, not to have to deal with its implications.

Also, when the event happens, planes are begin falling from the sky and cars without drivers crash into buildings and crowds.  Yet after this initial wave of chaos, Chloe begins to run down a road after the event and the destruction has happened and then 10 minutes later a driverless bus falls off a bridge.  How had it been driving for over 10 minutes with no driver without crashing?

When Chloe walks into the church that her mom used to go to, she is surprised to find the pastor of the church still there, and not raptured (taken up to Heaven).  The audience laughed hysterically at the screening when he tells Chloe what one has to have believed to have been taken to be with God and avoid the events that are to come.  It has to have a “preaching moment”!  Even Chloe echoes the audience’s thoughts at the irony of him knowing what to believe, thinking he believed it and yet is left behind, when she replies to him, “Why should I listen to you….you don’t even listen to yourself”?  How is the audience supposed to react any differently than Chloe’s indifference?

Theologically, this notion of what is called a pre-Tribulation rapture has gained a lot of followers the last 150 years or so.  What this means is that God will rapture, or take, people who are alive and bring them to heaven where they will be safe from the 7 year tribulation, or great testing, that is to come.  They believe that a world leader, in league with Satanic motives, will rise to power promising peace and a way forward after the damage caused globally by this rapture event, before revealing his true nature as being a servant of Satan seeking to establish a kingdom of his own.  None of this is present here in the film, despite it being the main thrust of the book.  Here, the entire film covers just a couple of chapters and is more about landing a plane safely in the midst of disaster. The rapture, here, is definitely not seen as an event to worry about unless one already believes in it.  Then it means everything.  Even the larger Christian church is divided on whether this will be a real event as described by those adhering to pre-Tribulation views. If the church can’t totally embrace one view, how is an audience supposed to see this as the definitive future foretold in the Bible?  This film does nothing to move the discussion on this forward.

The most disturbing part of the film is how two-dimensional each character is.  They are all written as cliches rather than as real people.  The Muslim on the plane is the first one everyone suspects. The “little person” on the plane is the angry short guy. The Chrisitan mother is seen as the “weirdo” for holding to such primitive beliefs of a God who loves us but who will judge us if we reject Him.   While she is proven correct by the events of the film themselves, there is nothing flattering about her view that she is right and everyone else is wrong that would change the perception or distrust some might have of Christians in general who they perceive as always trying to win the argument rather than love someone in spite of their differences.

Finally, as a Christian film which seeks to stand above the culture and proclaim a Christian ethos that they lament is lacking in Hollywood, it is then ironic how sexually exploitative the camera is when its eye is trained on the female cast.  Granted, nothing in this film is any worse than what you see on ABC Family television shows.  But, when you claim to be above such things, and call out Hollywood for this, you should probably reinforce that through your own actions.  Every woman in this film playing a prominent role and under the age of 40 has the following things in common as they are portrayed in the film:  Usually they are blonde, they have large busts with shirts that are 2 sizes too tight, the camera will shoot their scenes from above so as to get maximum cleavage shots, or the females will be crawling on all fours with straight ahead camera shots looking down their shirts as they helplessly try to get help.

Now, I am not a prude, and have seen way more than what I’ve described.  These things would not be a big deal in any other film, in most people’s eyes.  But when you hold yourself out as having a higher standard, you cannot afford to blatantly live in direct contrast with that if you then want to convince others to live more like you do in your pursuit of Christ. I am a Christian, and am glad for an ethos that holds women in high regard, and not as an object. I just wish that in a Christian film such as this, that that ethos was displayed. Every aspect of this film depicts women as objects to be lusted after.  It is a huge distraction to the larger “message” the film goes for.

The problem with Christian films has been well documented by Andrew Barber’s article on ZekeFilm and The Gospel Coalition’s website.  You can read it here.  And Left Behind suffers heavily from it.  So in an effort to be more hip and cool, Left Behind leaves the most intriguing part of the reason for this book behind and renders the whole thing uninteresting and forgettable.

So save yourself and anyone else you love and avoid this film.  Even if you agree with the theological point its trying to make.  Even if you liked the books.  If you like movies, stories, or even life and don’t want to waste 2 hours of it, then avoid this.  And, Nicholas Cage doesn’t even get to be himself, so how compelling could it be? Basically, this film doesn’t have a prayer. The End is nigh the minute this film begins.