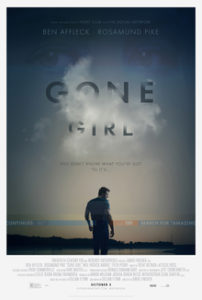 David Fincher brings a new tale to life that is built to mislead much as he did in the movie The Game, starring Michael Douglas and Sean Penn.  In that film, Douglas is given a game by his brother (Penn) which amounts to an elaborate prank.  But, even when Douglas declines the services of the game company, his life begins to slowly be taken from him, bit by bit, until he is pushed to do a deed that may destroy him.

Gone Girl, has a similarly simple and straight-forward plot.  Having relocated to Missouri from New York City, Nick (Ben Affleck-Argo, Good Will Hunting) and Amy (Rosamund Pike-The World’s End, Jack Reacher) Dunne seem to have the perfect marriage.  But from the opening scene, we are given a chilling warning from Ben Affleck’s narration that appearances are not always what they seem.

The film chronicles the disappearance of Amy Dunne on the day of their 5th wedding anniversary.  As the details begin to emerge regarding Amy’s disappearance, suspicion from within the film, and from the audience, begins to fall on Nick.

Just as Michael Douglass’ character, in The Game, believed himself to be an innocent victim to the chaos surrounding him despite the evidence mounting up that he had lost his money, driven away his brother, ruined his company, and more, so too does Ben Affleck’s character.  While we learn details of Nick’s moral failures, and see evidence that he may truly have it within himself to kill his wife, he continues to see himself as the victim.  He wildly speculates, seems to redirect the police officers who have been gathering evidence, and still engages in what could ultimately be damning behavior.

Kim Dickens (Blindside, Sons of Anarchy) plays Detective Rhonda Boney.  An officer in the small southern-Missouri town of North Carthage, she is slow and steady taking in every detail in front of her.  In contrast, her fellow officer, Jim Gilpin (Patrick Fugit-Almost Famous, We Bought a Zoo), is ready to pronounce guilt almost immediately upon Nick.

Fincher plays up this narrative from the first moment of the film before immediately shifting focus back to the early years of this doomed couple’s courtship and marriage.  The shift is as pronounced as the quickly changing scenes that play over the opening credits.  We are immediately asked to like this young couple and to root for their success.  Their witty banter, and desire to not settle into a “traditional marriage” filled with jealousy, nagging, and the usual strife seems to be noble, and authentic.

As we hear from Amy’s journal, the cracks in their relationship seems to coincide with the year 2008 and the subsequent recession that rocked their world and their ability to afford to stay in New York City.  Throw in a mother diagnosed with advanced stage breast cancer, and Nick had his reason to return back to his hometown.  Amy tells us she was willing to go….she only wished she had been asked.

These little cracks are played up as the plot begins to unravel.  We learn that Nick’s sister Margo (Carrie Coon-The Leftovers) has an extremely strained relationship with her sister-in-law, Amy. Amy’s parents, who seem to be loving and proactive as they help organize a search party to find their daughter, are actually the ones who exploited her failures in life to create a children’s literary character named “Amazing Amy”.  While their motives might be genuine, we see that their drive for success and overbearing nature was at their daughter’s expense.

Fincher gets a lot of mileage out of these details and it helps demonstrate the power that details have to cast judgment and doubt despite being privy to the details.  The media is shown to be a manipulator of this as well as we see the power of the 24 hour cable news cycle to shape public perception and opinion while claiming to be impartial, or fair and balanced.  Tyler Perry (Madea films,Alex Cross) plays a publicity-seeking lawyer who is known to always find the spotlight in the high profile cases he picks up.  Stereotypes are what drive this story and the presumption of guilt.

The film itself is a solid thriller that will provide several twists and turns.  That being said, the performances are also sound, yet nothing is really a stand-out performance.  There are some very seedy moments, and the camera acts like a fly on the wall exposing you to some of the dirty aspects of these characters, which also go into tainting your view of each of them and their possible guilt.

Fincher has said in interviews that he wanted this to be a “raw” portrayal of the popular book by Gillian Flynn, who also wrote this screenplay.  But rather than being “raw”, often times this film has a sleek shine of a filmmaker with a large budget at his disposal.  Fincher is still the master filmmaker, of course, but the film doesn’t hold up to the grit of his earlier work such as Se7en, or Alien 3.

Gone Girl will entertain the audience and is a very good film.  It is not, however, the Oscar-bound film that early buzz is proclaiming it as.  That being said, it is still a Fincher directed film with a solid cast, a Trent Reznor score, and a story that will keep you watching until the final credits come up.  That is better than most other films opening this weekend can say.

For another take on the film, try Rob Gabe’s review, by clicking here.