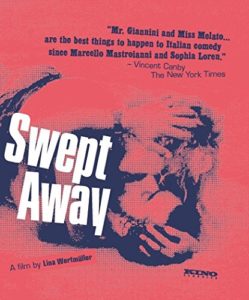 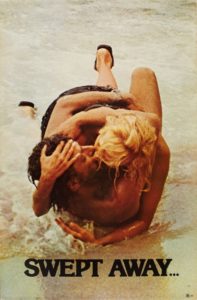 Tropical shores, unlikely love, and beautiful blue skies.  These are indeed major aspects of renowned filmmaker Lina Wertmüller’s 1974 island romance, Swept Away.  Based upon the title and the classic poster (featuring the two leads passionately making out in the sand as the waves roll in), one might expect the film to be adorned in magic hour photography and sexy saxophone music.

What we get instead is a shrewd, often uncomfortable dive into politics and class inequality, not to mention gender grappling galore.  The man, Gennarino (Giancarlo Giannini) and woman, Raffaella (Mariangela Melato), lowly shiphand and flagrant bourgeoisie, respectively, whom find themselves stranded on a deserted island, shout, insult, scowl, fume, and eventually beat each other through the movie.  They also have a lot of sex, as off-kilter as that is.  Is it then any wonder that the poster image of the pair embracing in the surf subtly frames them to be upside-down and twisted?  Like some sort of lusty gordian knot of arms and legs and hair.

Today, Swept Away is nothing less than one of the seminal films of the 1970’s.  For Wertmüller, who also wrote the film, it was her major breakthrough at the U.S. box office.  As controversial as it was alluring, Swept Away challenged perceptions on numerous fronts, far and wide.  As American indie director Allison Anders recalls in her published essay that’s included in the packaging, Swept Away not only entertained in an unexpected way, but shattered her political and social preconceptions. 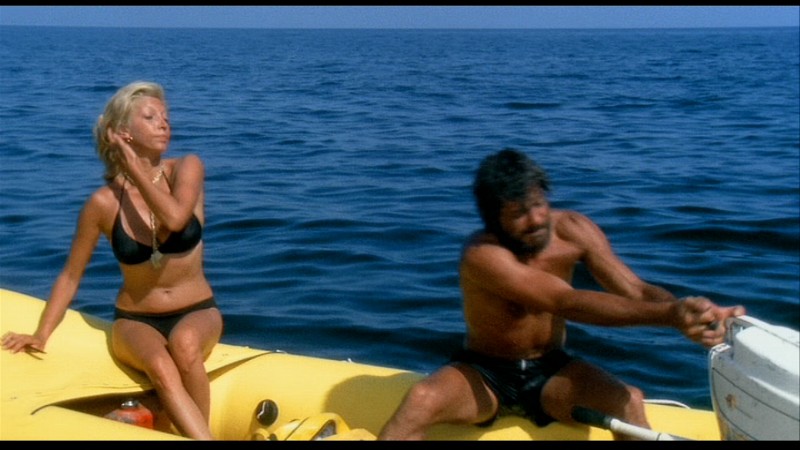 The story begins on a luxury sailboat, casually taking in the scenery of the Mediterranean coast.  The boat’s owners, Raffaella Pavone Lanzetti, and her husband Signor (Riccardo Salvino) choose to spend their time on the sun bickering to the point of exhaustion.  When Raffaella isn’t arguing for feminism and also right-wing politics (the two not at all separate in her mind), she’s ordering the sweaty male help to change their smelly shirts.  Between the shirt changing, Raffaella’s unending verbal beatdowns, and her tendency to lay out topless in the sun with the other ship-bound females, Gennarino, a communist activist in his spare time, is quickly, quietly burning down to the end of his wick.

One faithful day, Gennarino agrees to take Raffaella out on a raft for a swim.  The excursion goes wrong, and long story short, they end up marooned together.  There, on the uninhabited island, they must learn to live with one another – at times, even for one another – quickly.  The power dynamic takes a rapid 180 degree turn, as he’s the only one skilled enough to hunt and prepare food.  She clams up and, in a sense, crumbles.  He becomes emboldened.  Finally, he can voice all the things he’s been forced to keep suppressed.  Audience members will likely agree that Raffaella has these impassioned retorts coming.  But Wertmüller all but denies any crowd-pleasing catharsis.  In almost no time at all, his rage mounts to the point of smacking her around. 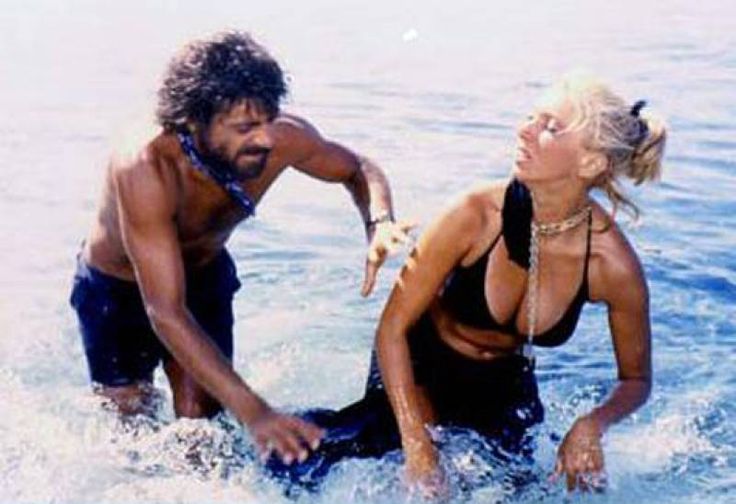 Maybe it’s the sensitivity talking, but I found that about one minute of him assaulting her equaled about one hour of her assaulting him.  Of course, her assaults are verbal while his are more of the physical variety, although her unending barrage of entitled drivel rips through the other characters and the film itself like some sort of perpetually grinding lady chainsaw.  From looking at her, you’d be forgiven for thinking that the clanking of her jewelry and the ice in her drinks may drown out her incessant speechifying, but no.

Swept Away is nothing less than a cinematic in capitalization of how humankind, and our perpetual need to fight and claw at each other’s throats, can completely sully a beautiful thing.  The coast, the sailboat, the island, all of nature – it’s filmed and presented in exquisite detail. This Blu-ray release most certainly makes excellent use of that.  But, enjoying that also means suffering through the central relationship. It means spending two hours with these people. Does the positive takeaways of Swept Away outweigh the negatives?  Seeing how these so-called “negatives” are entirely orchestrated and deliberate by Wertmüller, One must arrive at the conclusion that yes, of course they do.  It just means that for most of us, Swept Away is not the type of film we will be returning to very often. 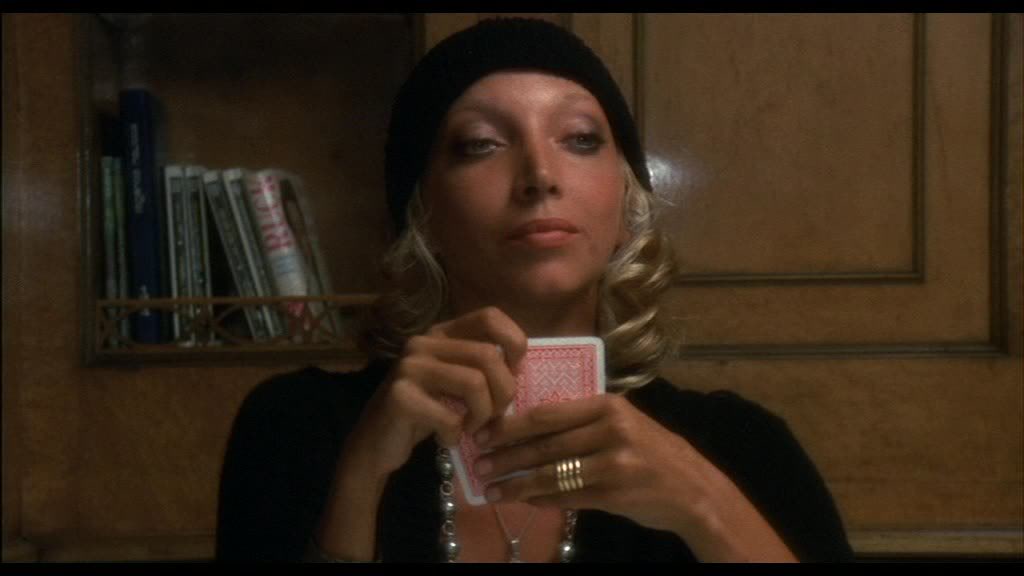 Mariangela Melato is SWEPT AWAY.

A cornerstone title in a recent theatrical Lina Wertmüller retrospective, Swept Away now arrives as a glorious Blu-ray, from Kino Classics.  As alluded to earlier, the disc looks and sounds remarkable, particularly for a foreign title released in 1974.  There are also several extras worth mentioning, The main one being an excerpt about the film lifted from the new documentary all about Wertmüller, Behind the White Glasses.  That films director, Valerio Ruiz, also provides a decent feature-length commentary track.  It’s nice to hear from someone who’s not only immersed himself in Wertmüller’s work, he’s spent a ton of time chronicling her in person.  Elsewhere on the disc, director Amy Heckerling (Fast Times at Ridgemont High) is briefly interviewed about the influence Swept Away had on her.  Additionally, there’s a printed insert containing essays about Swept Away by Allison Anders (Gas, Food, Lodging) and Grace Russo.

Giancarlo Giannini and Mariangela Melato are fearless and energized throughout this unlikely and unpleasant tale of a man and a woman screwing each other into a numb submission.  Because of them, Wertmüller can have her auteur cake and eat it too.  Tables turn and turn again, even when there are no tables to speak of.

Swept Away hasn’t been and won’t be to everyone’s taste, but then, so many important films aren’t.  If you’re up for a romantic adventure that pulls no punches, try getting Swept Away. 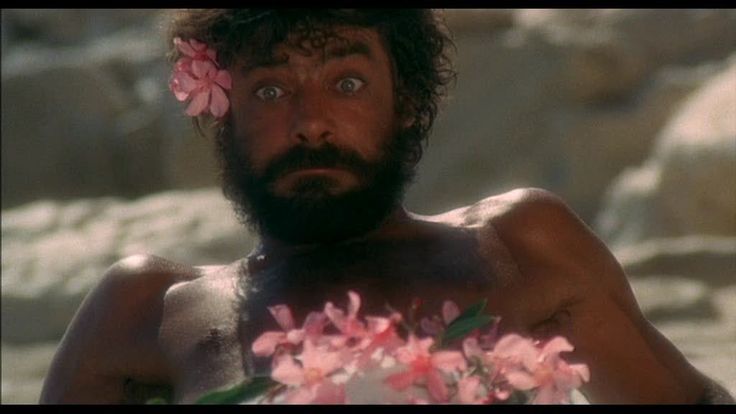 Giancarlo Giannini is SWEPT AWAY.