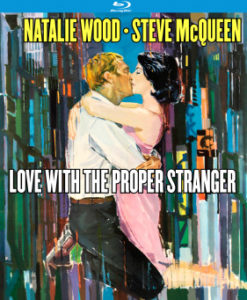 A film featuring Steve McQueen and Natalie Wood back in 1963 should automatically attract even the most casual filmgoer to take notice of what this movie is all about.  Throw in director Robert Mulligan, whose previous film was the Academy Award winning To Kill a Mockingbird, and that alone should move tickets.  Nominated for 5 Academy Awards including Best Actress (Wood), Best Screenplay (Arnold Schulman), Cinematography (Milton R. Krasner), Art Direction and Costume Design (Edith Head), and featuring the producing talents of Alan J. Pakula (To Kill a Mockingbird, All the President’s Men), and musical score by Elmer Bernstein (The Magnificent Seven), Love With the Proper Stranger, is already an out-of-the-gate award contender before it even gets seen.  Never released on DVD, Kino Lorber has remastered the film onto high definition Blu-Ray and the black and white film looks absolutely stunning, featuring tight urban shots, high fashion, and it is a film that gives one an authentic feel of New York as seen by the locals, and not the tourists.

As we learn in the informative audio commentary by Film Historians Kat Ellinger and Samm Deighan, both Natalie Wood and Steve McQueen were both looking for a project that was different from their usual fare.  McQueen was looking to demonstrate a range beyond his tough guy action roles, and Natalie Wood was looking to breakout of the younger, teenaged roles and musicals she was known for.  The story they took on in Love With the Proper Stranger, would have been extremely racy and controversial back during its day. 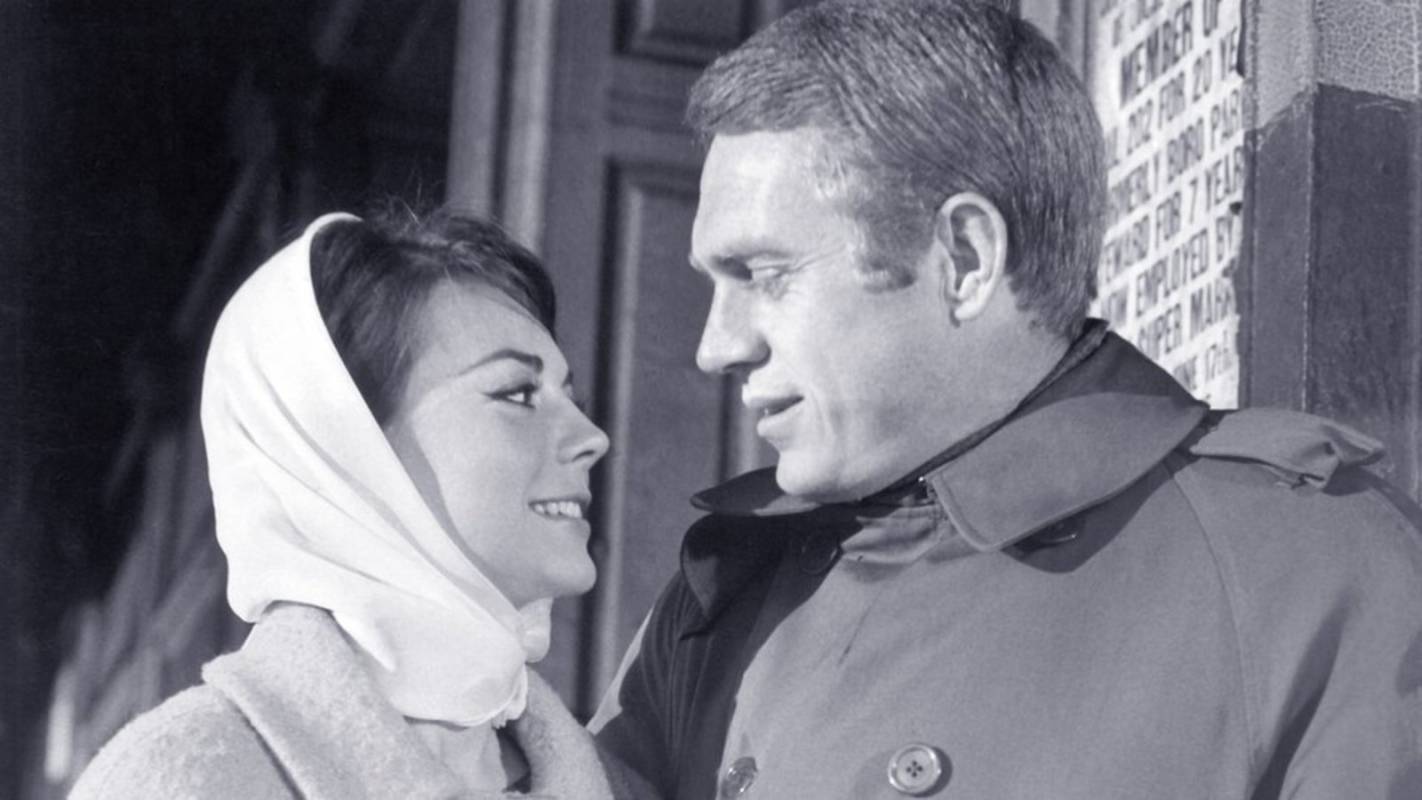 Wood plays Angie Rossini, a Macy’s salesgirl (going full circle from the young girl whose mother worked there in Miracle on 34th Street) who comes from a strict Italian Catholic family.  She lives at her brother’s house with another brother, and her mother who are all trying to look after her following the passing of her father.

McQueen is a struggling musician named Rocky Papasano, who is looking for work when he can get it.  Nearly middle-aged, Rocky still wants to live the carefree lifestyle of a musician, dismissing traditional notions of marriage and family.  Estranged from his loving family, as they simply love him more than he feels he deserves, he chooses to live mostly on his own terms sharing a flat with a female roommate named Barbie (Edie Adams) who is a burlesque performer.

The meet cute between these two stars is one that is unexpected and jarring, especially for the times.  It turns out that this isn’t their first meeting.  Though Rocky does not remember her initially, Angie is there to announce that their one-night affair has resulted in her being pregnant.  Obviously upset, she tells Rocky that she doesn’t want anything from him except the name of a doctor.  10 years prior to Roe v. Wade, this simple request took on the controversial view of “back-alley” abortions, and the complicated ways one would set up payments to a go-between to secure the appointment.  This all had to be kept off the books, especially since it was illegal, resulting in extortion by those handling the arrangements.

When Rocky chooses to accompany Angie to the appointment, they end up spending the day together.  At first this day is meant to secure more funds, after additional fees are demanded by the gentleman arranging the procedure. It turns into Rocky bringing Angie to see his estranged parents, who he knows will hand him cash to have the piece of mind that is being taken care of.  At first, he is just there for the cash, but as he sees how his parents take to her, he remembers his night of passion with Angie, and the ideas of marriage and family come crashing into his long-held lifestyle of perpetual adolescence and being a free-spirit. 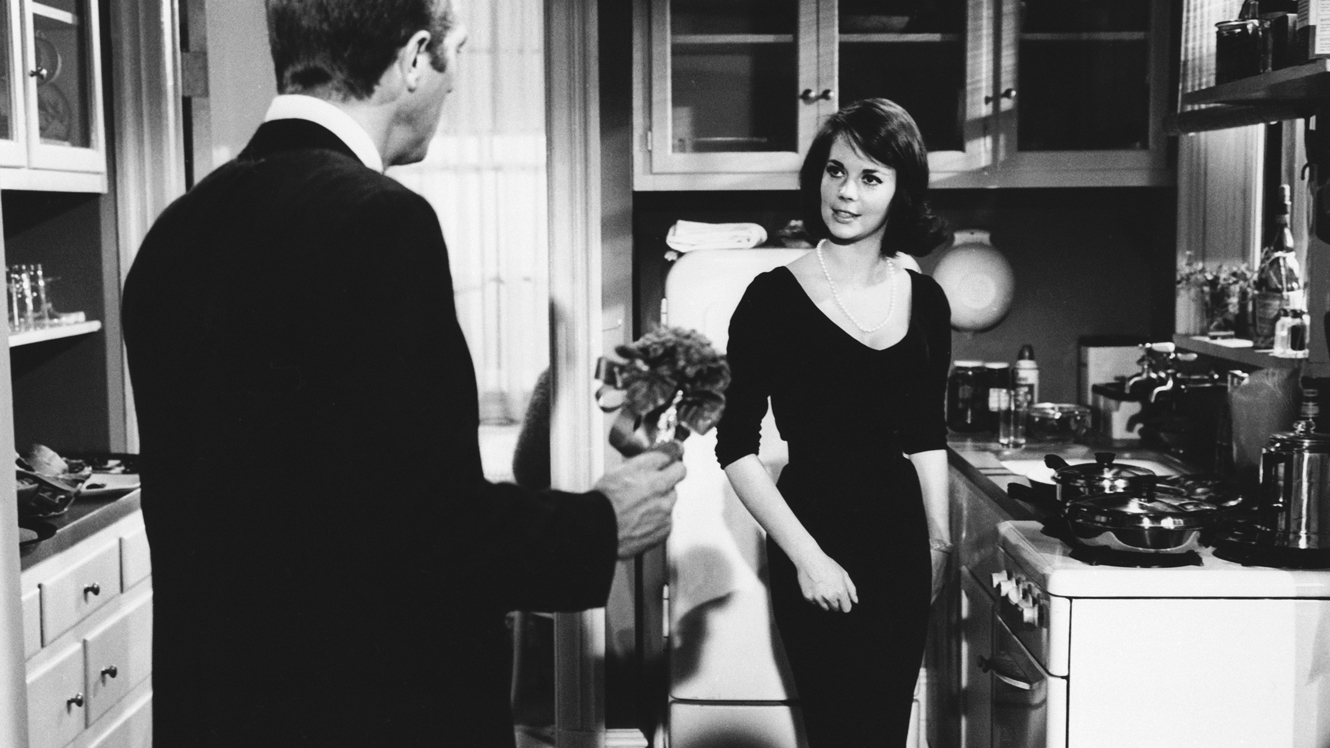 As Kat Ellinger and Samm Deighan remark in their special features audio commentary track, much of the scenes and situations were the influence of European filmmakers, particularly that of the French New Wave and Italian Neo-Realism.  The gritty urban scenes, and dealings of the struggle of two working-class individuals trying to rise above their circumstances while juggling the existing sexual roles in society and what each truly wanted out of life make 2/3rds of this film an interesting watch.  The last 1/3rd of the film obviously succumbs to the studio’s pressure to make this a bankable rom-com of its day as Rocky begins to switch his thinking to pursue a more traditional lifestyle that he hopes includes Angie, who is thinking of taking the simple, safe bet of settling down with her brother’s matchmaking attempt with clumsy chef Anthony Columbo (featuring Tom Bosley from Happy Days in his on-screen debut).   Angie tries her hat in being the single, high-society, never-settling-down-party-girl as she strikes out on her own and gets her own apartment, but who is really wanting to end up with Rocky.

The last 1/3rd of the film also feels a bit too contrived, though audiences will cheer for these two to end up together.  The satisfaction of the end result is only due to the risk involved in having a film deal with the fallout of a one-night stand where the innocent, pure, Catholic girl chose to do something shocking with a free-spirited musician that saw that as par for the course of his daily life.  The initial choice to have an abortion, also feels authentic given the pressure at home and in the traditional roles outlined by the culture around them. Had the studio allowed Richard Mulligan to continue to take risks with this relationship all the way through the film, it may have been a film that is better remembered beyond the names of the two stars that appear above its title.  Either way, it is a memorable performance from two actors looking to change the perceptions of the movie-going public who were close to type-casting these two.  It also features one of the best cast and crews of its era.

The Kino Lorber Blu-Ray release of Love With The Proper Stranger is released in black and white and has an approximate running time of 100 minutes.  It is formatted in 1.85:1 ratio and presented in 1920x1080P.  It it contains English subtitles if needed, and has a trailer gallery as well as the already mentioned Audio Commentary by Film Historians Kat Ellinger and Samm Deighan. 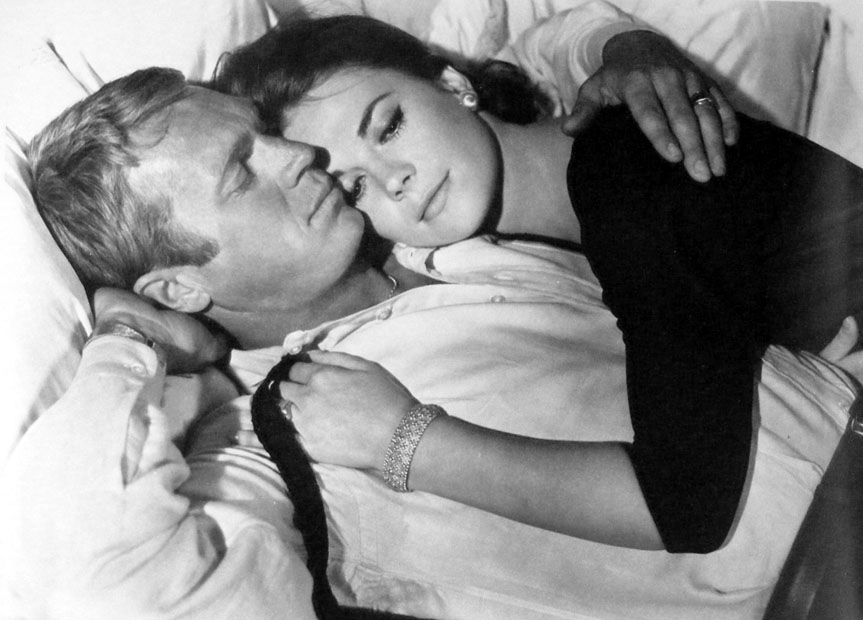