One of my favorite comparisons in Hollywood’s version of history is in the 29 years elapsing between Errol Flynn’s heroic portrayal of General George Armstrong Custer in 1941’s They Died With Their Boots On and actor Richard Mulligan’s appearance in the same role as a vainglorious sadist and psychopath in 1970’s Little Big Man. Both were iconic films of their times and both, from a purely artistic point of view, have equally stood the test of time as films that, viewed today, are as entertaining as when they were made. However, their divergent views on the same events and people do and should continue to spark conversation on Hollywood’s changing vision of the past, along with their evolving portrayal of historical figures; as evidenced by cultural and artistic products that are themselves now a part of history. 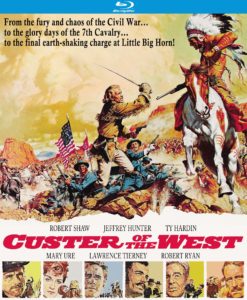 Positioned between those two polar views of Custer, both from the perspective of time and moment of historical import, is the internationally-financed, shot-in-Spain, Super Technirama 70 and Technicolor production of Custer of the West (1967). A big screen epic helmed by a distinguished member of the Hollywood old guard – Robert Siodmak; whose decade-defining thrillers, including The Killers (1946) and Criss Cross (1949), gave stylistic shape and substance to the later-defined film noir genre – Custer of the West poises itself between an older style of filmmaking that was quickly becoming passe and a rapidly developing Hollywood interest in Bonnie and Clyde (1967)-like historical revisionism. 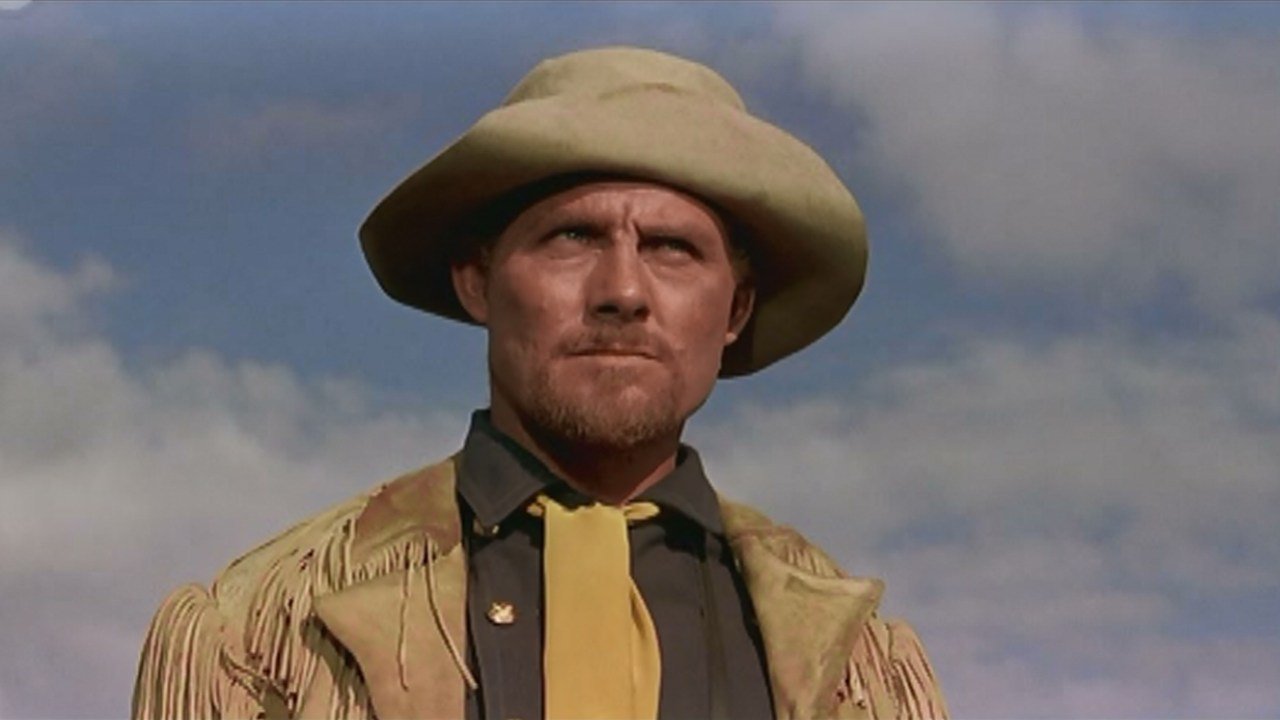 Starring an actor in the title role – Robert Shaw as Custer – who himself may have looked the part of a lantern-jawed screen idol of decades-past but contained in his performances an anger and intensity that anticipated the conflicted anti-heroes of the next decade, Custer of the West rather uncomfortably straddles conflicting styles and a model of production that occasionally ill-suits its more classical storytelling methods. All making the old/new Western interesting viewing throughout, but in watching often threatens to break into an unequal sum of its fragmented parts through 141 unfocused minutes of screen schizophrenia.

With a perpetual scowl that does not once break the hard lines of his handsome face into upward lip-curving relief, Robert Shaw’s Custer is a stiff-necked martinet who nonetheless has enough self-awareness to acknowledge the respective abuses and treaty-breaking of the U.S. government while still forcefully implementing U.S. Army commander Gen. Phil Sheridan’s (Lawrence Tierney) dictum that “the only good Indian is a dead Indian.” Entirely unsympathetic yet strangely compelling as a character, the production around him, unfortunately, rarely rises to the complexity of Shaw’s fascinating portrayal.

Alongside his faithful but long-suffering wife (Mary Ure), a drunken though not completely incompetent second-in-command (Ty Hardin), and a conflicted though not entirely convincing “bleeding heart” adjutant (Jeffrey Hunter), Custer assumes his command of the remote Dakotas fort with an iron grip only equal to his hard, unyielding treatment of renegade Cheyenne. Representing the equally hard, unyielding resistance to that treatment throughout, Cheyenne Chief Dull Knife (Irish character actor Kieron Moore in redface; story-functioning as a composite of several tribal leaders) meets that iron grip with a brutally violent town raid – given the extra irony of occurring on a 4th of July celebration – to match the daily suppression and clockwork-like massacres of his people.

The storytelling quid pro quo volleys an audience’s sympathy back-and-forth with the manipulative predictability of a competitive sporting event, but in its best moments, one can’t help but draw parallels between the then ongoing and daily deepening military situation in Vietnam. And while some of that complexity is inherent in the storyline and historical context of the film, Custer of the West rarely approaches an even-handed – or even dramatically consistent – portrait of either the perpetrators or victims of similarly tragic military actions towards an indigenous people. Little Big Horn rises Tet-like from the inevitable clash between the cavalry and warring tribes, but Custer of the West favors an early 1940s-style heroic spectacle in these passages – Custer’s golden locks waving in the breeze as he valiantly defies the overwhelming odds – as opposed to the de-romanticized 1970s-style screen slaughter of later films of the Vietnam-era. 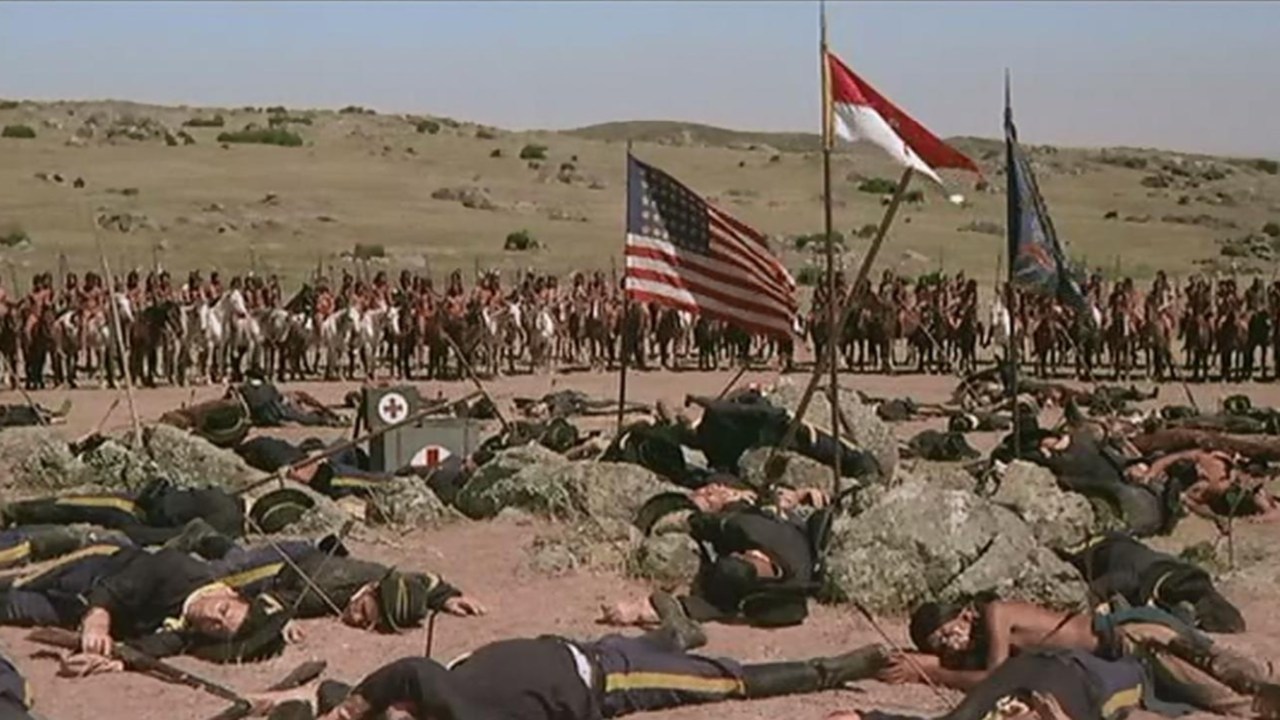 Kino Lorber’s Blu-ray release of Custer of the West comes without the special features that might have contextualized the film, so each viewer is left to discover the merits or demerits of these Classical and New Hollywood elements clashing against each other for him or herself. Preserving the wide aspect ratio of a film that was shot for but apparently rarely exhibited in Cinerama, Custer of the West‘s release between the all-star WWII-flick Battle of the Bulge (1965) and the groundbreaking, medium-altering 2001: A Space Odyssey (1968) is a telling one, with several sequences from the intended Super-Western – including a runaway stagecoach down a mountainside and a runaway train across blown-up tracks – obviously intended for the big-screen process, but losing much of their impact without it.

Neither the spectacle nor complex drama envisioned, the film and home video release of Custer of the West is mainly recommended for Westerns completists and for Robert Shaw’s unusually conflicted performance. The historical Custer may not have been either the martyred hero or the villainous megalomaniac of subsequent legacy, but the tragedy of the misguided career officer is well-captured in Shaw’s ambivalent portrayal of a man who would later be called both.

The images in this review are used only as a reference to the film and are not meant to reflect the image quality of the Blu-ray.