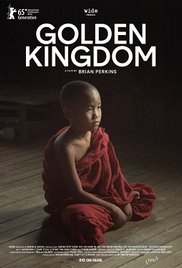 The fascinating thing about Golden Kingdom, besides is touching tale is that it is the first international picture to be filmed in Myanmar since the country recently opened itself back up to the outside world.  With such a window of opportunity available, and with no one knowing for how long, director Brian Perkins has filmed a picture that captures the culture with a sense of awe and wonder, still acknowledging the ever-present danger that lurks in the shadows.

The film is set and filmed in the Northeastern part of Myanmar (formally Burma).  It is here that we follow the lives of 4 young Buddhist monks who are living and learning at the monastery that is nestled in the mountains.  In addition to their daily chores, they also practice the set mantras and rituals of their Buddhist beliefs with the head abbot as their master.  One day, he learns that he must go through the mountain pass after being summoned to the city.  He leaves Ko Yin Witazara, his most able student in charge of the other 3 boys before setting out on his journey.

The cinematography of Golden Kingdom is a sight to behold.  Director of Photography and Cinematographer, Bella Halben, captures the mountainous beauty of Myanmar with a quiet and steady lens that draws the viewer, not just into the story, but into the very country itself.

The 4 young monks continue to follow their routine day in and day out, occasionally looking down the winding path, anticipating the abbot’s return.  An elderly man from a nearby village shows up regularly to deliver to them a ration of rice and vegetables, but other than that, they are left alone to practice their monastical ways.  It is in their isolation that they begin to experience aspects of the world that they have not experienced.  Gunfire begins to be heard in the distance.  One of the 4 boys contracts a serious stomach ailment.  A wounded soldier shows up in their monastery looking for a peaceful place to die.  A woman looking for her husband, while carrying their child in her womb arrives at an hour of need.  Through each of these events, and the haunting visions young Witazara experiences, the 4 monks must learn to fend for themselves and ultimately decide if they should follow their master through the mountain pass, towards the sound of war. 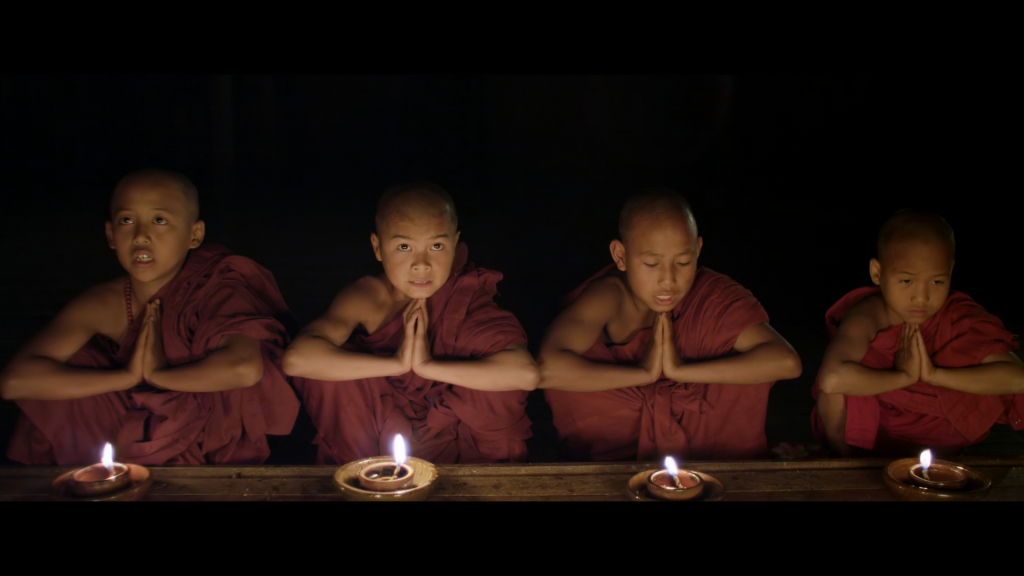 The cinematography of Golden Kingdom is a sight to behold.  Director of Photography and Cinematographer, Bella Halben, captures the mountainous beauty of Myanmar with a quiet and steady lens that draws the viewer, not just into the story, but into the very country itself.  The people, the daily pace, and the way of life are all felt with the authentic feel more akin to a documentary, though this is a fictional story.  Also amazing, the 4 main actors in this film are all locals who had no previous acting experience. They all give solid performances, especially for being so young.

To film in these remote locations, Brian Perkins had to bring in the equipment through Thailand, and then have the crew carry the specific equipment and generators up the mountain to reach the setting of this tiny monastery.  The effect of this is a location that helps truly capture the authentic aesthetic of the daily life of the people of this region.

He allows the camera to hang on every detail of every action, never rushing the action or the flow of the narrative.  From the small details of how the 4 monks hold their hands while repeating their mantras, to the slow wide-angled pan shots that capture the pristine countryside and quiet that would lend itself to a monastery seeking to aid those in search of the quiet path towards enlightenment. The result is a moving film contained in a story that isn’t meant to move in the way we think the narrative should.  For those who are willing to slow down and take it all in, the film is a moving experience that actually brings one to a place of serenity and contemplation.

The DVD release of Golden Kingdom, from Kino Lorber, has a number of extra features contained in the DVD release.  In addition to the trailer, there is an interesting short “behind-the-scenes” featurette that allows director Brian Perkins to document why he made this film, and the importance of this location, as well as many of the specific things they had to do to make this location work, despite its extremely remote access.  There is also several audio soundscapes containing some of the beautiful scenery from the film, with the natural sounds of that location provided as a means for meditation for the viewer of the DVD.  The film is in the Burmese language with optional English subtitles and 5.1 surround sound.