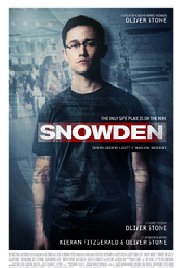 As the credits rolled for Oliver Stone’s latest film, I sat in anticipation for the Q&A that would follow featuring Oliver Stone, Edward Snowden, Joseph Gordon-Levitt, and Shailene Woodley.  Namely, I wanted a look at the man that Gordon-Levitt had just portrayed, side-by-side with the actor who played him.  I wanted to see how closely Joseph Gordon-Levitt captured this man’s essence.  I guess this was because the balanced, and humanizing way in which Oliver Stone’s film portrayed the controversial figure made me question whether or not the portrayal was authentic to the man who was about to be live via satellite in front of me.

I had heard the caricature of this man as the story was covered on the various news outlets over the years, but this would be a chance to watch him live, and see if he could garner my empathy the way the movie did.  As I stated in my review, I felt that Oliver Stone played it safe.  This film is clearly a charm offensive.  And in not playing it the way we expect Mr. Stone to play it, he may be in fact subversively finding a new way to get us to buy in to his view of Edward Snowden.  In fact, before the film actually played, we were treated to a humorous PSA by Oliver Stone to put our phones away, while also highlighting the controversial NSA programs he was about to expose us to in the film.  Here is the PSA:

The credits ended, and then the screen revealed the moderator of the Q&A with introductions of the featured guests as they sat for the interview in New York City, followed by an introduction of Edward Snowden who was appearing from Moscow.

Edward Snowden was actually very loose, and did not come off as a man who had basically been in house arrest in a foreign country for several years.  He was on point about why he did what he did, though he would not go so far as to acknowledge certain aspects of the case, obviously fully aware that he could still stand trial for his actions.  But the conviction with which Joseph Gordon-Levitt had portrayed him was fully there. He spoke about being willing to stand trial, but not if it meant doing so in a secret court due to his being charged under the World War I era Espionage Act.

In a separate interview with BuzzFeed News, Joseph Gordon-Levitt mentioned how this act was made for soldiers in trench warfare who gave away their positions to America’s enemies….clearly treason.  But in an interesting angle, Snowden mentioned that he chose to not expose the documents he stole, but to turn them over to the press.  Since a free-press was part of the 1st Amendment of our Constitution and was meant to help hold our Government accountable, Snowden chose to let them decide what documents to release and which documents to withhold.  In fact, in the film, a U.K. Guardian editor informs her team in Hong Kong that they had let the White House know about the documents they were going to release and asked them if there was any national security reasons for not releasing it.  They claim they were never told that there were any, and of course the story broke.

In my mind, this was interesting because even if one disagrees with his actions, you must admit that it is in keeping with the actions of a whistle-blower, and not of someone who has turned their back on their nation to aid and abet the enemy.  Snowden continually called himself a citizen and an American.

At one point, a Twitter question was asked of Oliver Stone, essentially wanting to know what “take-aways” he wanted the audience to grasp from the film.  If ever he had an opportunity to put his opinion out there and drive home his point, it was now.  Instead, Stone simply smiled and said that he is a dramatist.  He wants us to see the events of 2004-2013 and make up our own mind.  He didn’t think his film was a take-out restaurant where you leave with a certain order, or point of view.  And then he left it at that.  Clearly, he is trying a new tactic, or this is the kinder, gentler Oliver Stone who wants to make his points and have nice box office returns too. 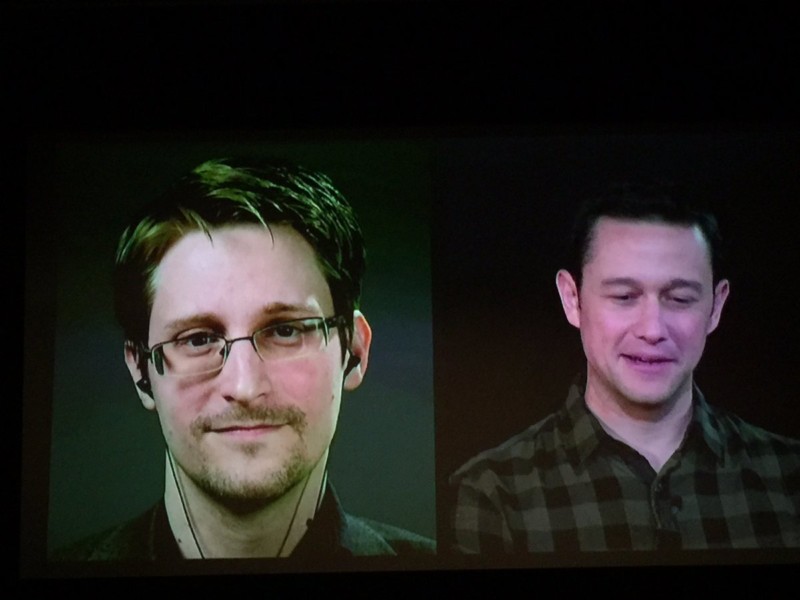 Whatever the reason for the charm-offensive, it worked.  The Fathom event provided a a nice interview with a strong cast, a legendary director, and a man at the center of a firestorm.  Traitor, hero, whistle-blower, or patriot, Edward Snowden now has a film that tells his story in a way that humanizes him beyond the actions he has become known for.  When asked if he liked Joseph Gordon-Levitt’s portrayal of him, he simply said it is strange to see someone portray the events of his life, but that his family thought he (JGL) got him (Snowden) right in his portrayal.  Joseph Gordon-Levitt mentioned that at the New York premier, he was able to meet Snowden’s parents and grandmother, and that their gratitude and praise was the best accolades he has ever received in acting.

Given Snowden’s family’s history of serving this country, you wonder if Shailene Woodley and Joseph Gordon-Levitt’s analysis of the dangers of the internet and the 24/7 news cycle wasn’t spot-on.  They said we are a nation that is bombarded with news constantly, but that it only goes so deep before we are hit with more news about something else.  They said they had no idea about who this man Snowden truly was before they started researching for their roles, and in digging through all of the information available online they were able to get a fuller view of the man beyond the profile that they heard in the news reports.  I have to admit that is true more often than we care to admit.  Leaving the theater after this Q&A, I took their advice and began to simply try to learn more on my own.  And if that is all that Oliver Stone said he wanted, then his film did exactly as he wanted, and the charm offensive worked.