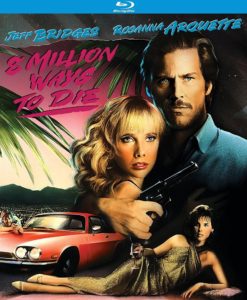 Following the gritty cops n’ crime pastel tinged tensions of Michael Mann’s Manhunter and William Friedkin’s To Live and Die in L.A., 8 Million Ways to Die is a bold next step in that particular stylistic canon. Whether it’s a step upward, downward, or nowhere of any consequence is entirely dependent on whom you talk to.

These are stories of aggressive lawmen of few words; men on the bubble and sexlessly frustrated, holding forth to their sunglasses and guns. Their world is one of compressed focal length days and neon lit nights. And day or night, the streets are never not wet. Synth music scores the festering cityscape, with the L.A. smog doing the heavy lifting in terms of visual vibe.

Mann and his television series Miami Vice would cement the popularity of this now kitschy-cool VHS era aesthetic; Nicholas Winding Refn would throttle it into auteurhood years later with Drive. In the early in-between, filmmaker Hal Ashby (of all people) would take his shot at it, casting Jeff Bridges in the starring role of failed L.A. cop and alcoholic Matthew Scudder.

There is this sadness at the core of 8 Million Ways to Die, although the film itself is not a bad entry into the stylized niche that it’s a part of.

Scudder is realized boldly by Bridges; a sweaty and scruffy proto-Dude. Having lost his job over his fatal shooting of a raging if also unarmed suspect (insert comment on the uncomfortable relevancy to recent headlines here), he seethes with inner torture. The actor was deep into the “handsome leading man” phase of his career, and seems to relish the opportunity to play such a flawed and conflicted protagonist. 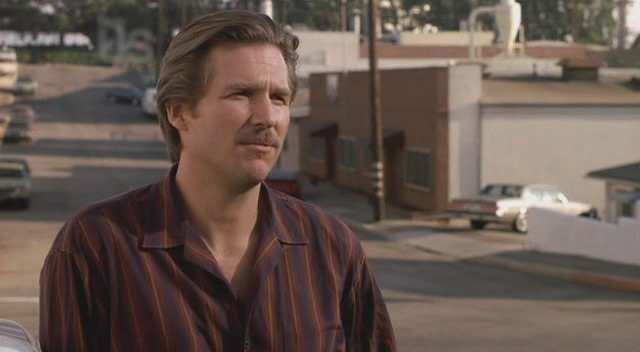 Scudder may be a killer (if not a murderer), but he draws the line at taking freebies from the prostitutes he rescues. He’s a good man, sure. Maybe. Most of the time. But, in the macho world of this film and the many like it, what matters more: That Scudder valiantly resists sleeping with not one but two amazing high-end hookers in distress (played by Rosanna Arquette and Alexandra Paul), or the fact that they’re throwing themselves at him in the first place?

Which is only one aspect of this project that begs the question: Is this a movie Hal Ashby really wanted to make? Guns and drugs and dirty cops? Prostitutes in trouble? A seeming far cry from the man who gave us the onscreen permission, “If you want to sing out, sing out/If want to be free, be free. There’s a million ways you can be… You know that are…” 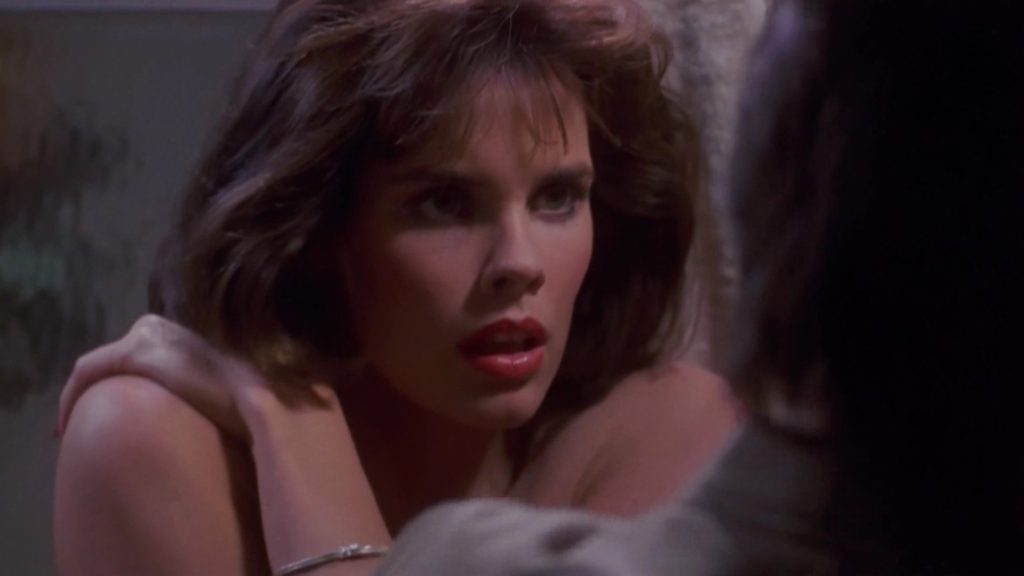 Alexandra Paul covers up in 8 MILLION WAYS TO DIE.

It is, in any case, a movie that he could get made at that time.  Ashby’s career in the 1980’s stoops in sharp decline after his can-do-no-wrong run throughout the 1970’s. From Harold and Maude (1971) to The Last Detail (1973) to Shampoo (1975) to Bound for Glory (1976) to Coming Home (1978) to Being There (1979), we’re talking one of the greatest uninterrupted directorial hot streaks in movie history.  In an instance of Cinderella-like clockwork, at the clock-strike of the 1980s, Ashby’s career went south, never to recover.

Ashby was a gentle and loving soul, a beloved “actor’s director” and defining cultural voice of the 1970’s.

8 Million Ways to Die, tumultuously adapted from a Lawrence Block novel, and boasting a screenplay by Oliver Stone and rewritten by R. Lance Hill (under the cover name “John Lee Henry”) and rewritten again by an uncredited Robert Towne, is the tarnished finale of Ashby’s feature film career.  Finding himself rutterless in the Age of Spielberg, one suspects that the filmmaker hashed over the material (in more ways than one), finding whatever he could to sell himself on this offered foray into the emerging multiplex scene. 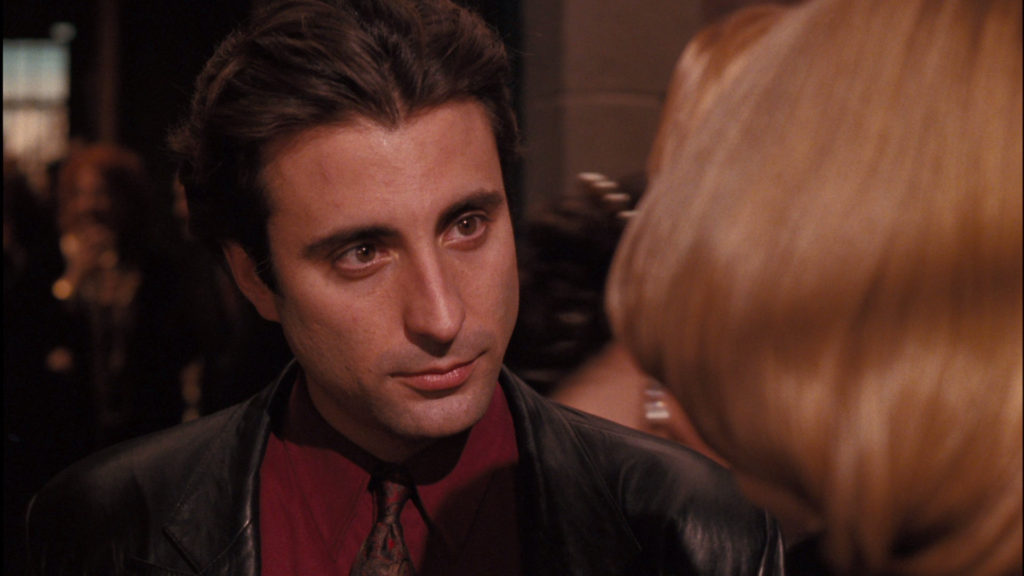 A primary theoretical example would be Bridges’ character’s addiction to alcohol. With the exception of two glaring Alcoholics Anonymous scenes, this major trait and stumbling block is a muted undercurrent in the story, though in retrospect, one that feels like it was meant to be a primary aspect. If there’s one thing in all of this that Ashby knew unequivocally, it was substance abuse.

A few more modest made-for-TV efforts, then Hal Ashby would die of cancer in 1988. Already though, drugs and demons had taken their collective tolls. His failed and compromised projects were piling up as quickly as producers could get rid of him. Being used as he was purely as a prestige lure to reel in certain actors, then locking him out of the editing room once shooting wrapped, was a heartbreaking way for Ashby, an Oscar winning editing genius, to wrap a film. In the decade of Reagan and staunch bottom lines, it happened to him more than once.

Through it all, Ashby was a gentle and loving soul, a beloved “actor’s director” and defining cultural voice of the 1970’s. In that decade of disco, the S.L.A., pet rocks and The Brady Bunch, Ashby’s output anchored the cinema of the day with forward depth, mature dignity, and appealing vitality. And he did it on his own terms. 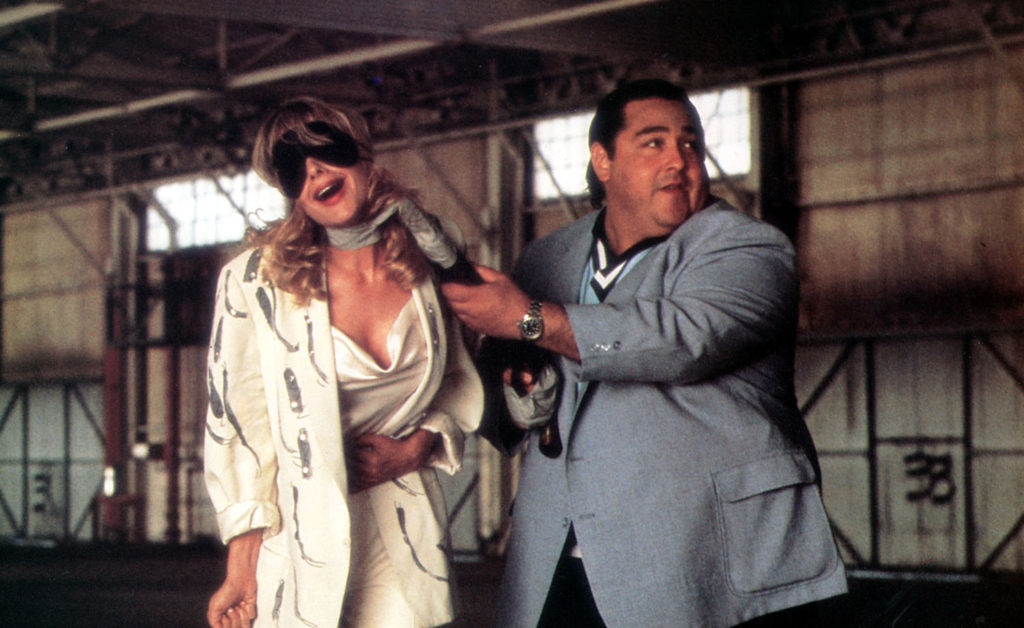 Rosanna Arquette, in a sticky situation.

On the absolutely wonderful commentary track, film historians Howard S. Berger and Nathaniel Thompson cover all of this and much, much more in an engaging, you-are-there breakdown of Hal Ashby’s wonderful and terrible career. Cocaine comes up, it having been so liberally snorted in the 1970s that by the time the next decade set in, the big crash was imminent. In what may be read an ongoing bout of industry-wide self loathing, producers delivered a buzzing litany of messed-up cops gunning down the very kind of coke dealers they enabled to opulence. Despite an unfortunate shared penchant for drugs, Ashby was never a kindred spirit with those types.

There is this sadness at the core of 8 Million Ways to Die, although the film itself is not a bad entry into the stylized niche that it’s a part of. There’s a tense honey of an armed standoff, there are plenty of Film Noir carryovers, and It’s always nice to see Rosanna Arquette, here in her heyday.

It’s also nice to see her recently interviewed for this handsome Blu-Ray, along with Andy Garcia, who plays the villain in an early breakthrough role. Actress Alexandra Paul and author Lawrence Block is also interviewed. Each interview runs no longer than twenty minutes, and are all worth watching. Notably, Arquette and Garcia both visibly welling up at the memory of their beloved director. “This movie killed him”, Arquette bluntly tells her interviewer.

For Ashby, the 1970’s may’ve offered a million ways you can be, but by his end in the 1980’s, there was only 8 Million Ways to Die. Sadly, this great director knew them all.