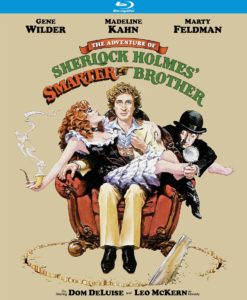 There’s been a lot written in the last week or so about the late Gene Wilder – all of it loving, of course. He’s the kind of actor who immediately invites your purest good will. There’s something delicate in his build, in his doleful, at-rest gaze, in his round face, in his default helpless expression, so that when the hysterics erupt, he’s already set you up to not run away. You want to help him. When he shouts, it’s with the crystal clarity of an enunciating alarm, but his voice peals out so helplessly, and those wet eyes bulge out so plaintively, there’s nothing you can do but want to rescue him. What complicates that, and makes it so delicious to experience, are the brains that precede the bellowing. When not open and yelling, his mouth is a prim, thinking slit, so that any pause he takes is an excruciating internal evaluation. We fall into the slipstream of what he’s thinking, and as he seemingly coils away from what we all might want to say, it’s actually a wind-up, and soon he’s spraying the scenery with his neurosis. The singularity of his talent, and his indelible, unrepeatable gift to comedy, lives inside those few seconds of deadpanning calculation before final liftoff. The only parallel talent that comes to mind is the slow-burning John Cleese, but the ultimate payoff there is beholding a man so over the top with white-hot fury, it turns into a kind of poetry, while Wilder’s explosions are shot through with a classic, existential “why me?” 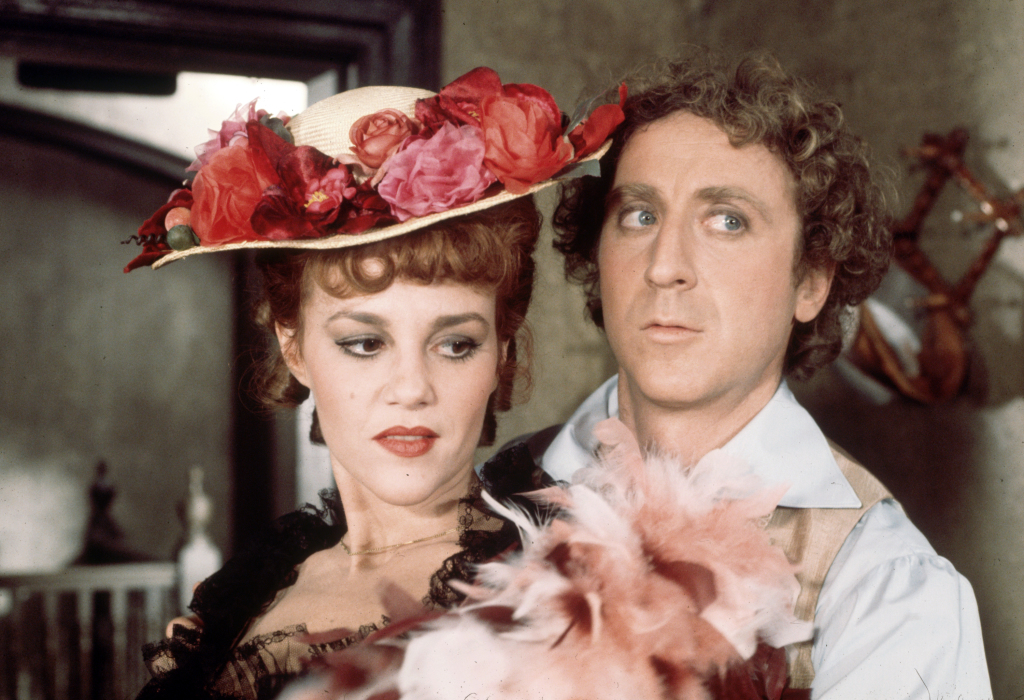 But not all Wilder performances are created equal, and not every role is outright comedic. Most people likely think of only a fraction of his movies when thinking of him at all: the simpering Leo Bloom in The Producers, the titular, increasingly raving monster builder in Young Frankenstein, the smoothly fitting yin to Richard Pryor’s jiving yang in their four-long series, or, probably most ubiquitously, the relatively calm, but deeply perverse Willy Wonka. But mixed in amongst those are the lessers, the titles your eyes tend to hop over on the IMDb list – two of which Kino Lorber is issuing on Blu-ray in an unintentionally timely tribute to the man. The Adventure of Sherlock Holmes’ Smarter Brother aims to be a spoof in the tradition of Young Frankenstein. But written and directed by Wilder, it doesn’t share the same pure, Brooks-level spirit of restrained anarchy, nor its arch fidelity to a specific film style, which means it’s not pinned down visually, which was half the fun of that movie. Wilder is Sherlock’s brother, Sigerson, but it’s less clear as the movie goes along whether the “smarter” in the title is supposed to be ironic: the plot, as it were, doesn’t place him in scenarios that demonstrate his overt cleverness or his incompetence. The only nuance he does give him is a chip on his shoulder for living his whole life in his brother’s shadow, but this has little to do with his intelligence – which, of course, Wilder couldn’t hide if he tried. 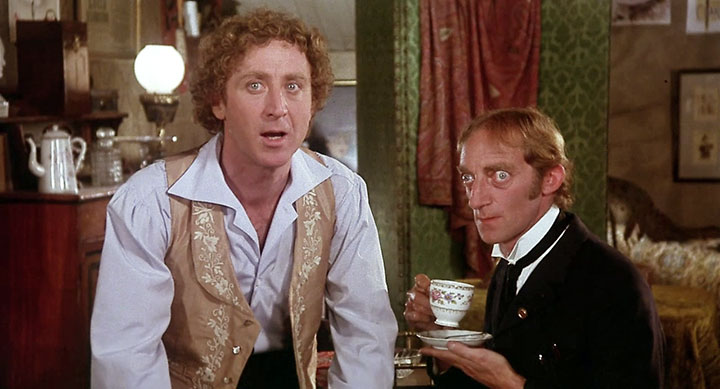 But the movie’s larger problem looms: the jokes just aren’t that funny. A lot of great ideas (the coach-top fight with an oversized hand and shoe from the glove and shoe repair storefronts comes to mind) get drained of potential laughs by the poor timing of edits and the general half-heartedness of execution across the board. Even Wilder’s patented blank stares, of which there are several, fall flat due to the lack of spark from the comment he’s reacting to. One gets the sense that directing the film – this was his first time in that capacity – distracted him from his gift. Even so, he’s still clearly having fun with his YF co-stars Madeline Kahn and Marty Feldman, both of whom get ample free space to be who they are. The best thing about the movie is Wilder’s commentary track (ported over from Fox’s 2006 DVD). He’s quiet, self-chiding, and humble. That same gentle voice that we’ve heard explode so many times, here remains level and circumspect. He might not admit to how far the film falls short of others in his body of work, but he does admit he did it mostly for the fun of working with his friends. His final comment on the disc is as much an epitaph for the film in a modern context as for his entire career, as it is one that seems to belong so much to its time: “It causes a little bit of pain in my heart every time I think, this film, would anyone make it today? And I don’t think they would.” 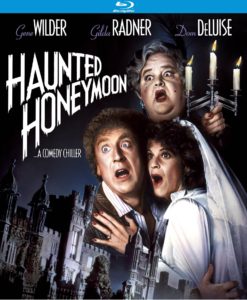 Meanwhile, Haunted Honeymoon, a purported “comedy chiller” written and directed by Wilder a decade later, requires even more forgiveness. Wilder and real-life wife Gilda Radner play an engaged radio show team in the ’40s who travel to his childhood home, a creepy castle, for their wedding. There, a motley crew of estranged family members brew a plot to frighten him to death for reasons involving the family fortune and the decree of his ailing aunt, played in drag, yet with bizarre forlorn seriousness, by Dom DeLuise. What transpires could possibly be justified as a throwback to an earlier style of storytelling, perhaps even meant for children, but the general result is a barrage of weak shtick, faux scares, and hammy mustache twisting, with the greatest sin of all being the perfect, movie-long set-up for a classic Wilder meltdown that he and the movie simply fail to deliver. Wilder is game as ever, and like Holmes’ Smarter Brother, it’s clear there’s much fun being had by these actor-friends, but what’s scared up here is best left to completists only. Bottom line, these movies don’t represent the best of what Wilder had to offer, but their release is at least enough to validate a fan’s love for simply watching a favorite performer, simply because he’s a favorite performer. 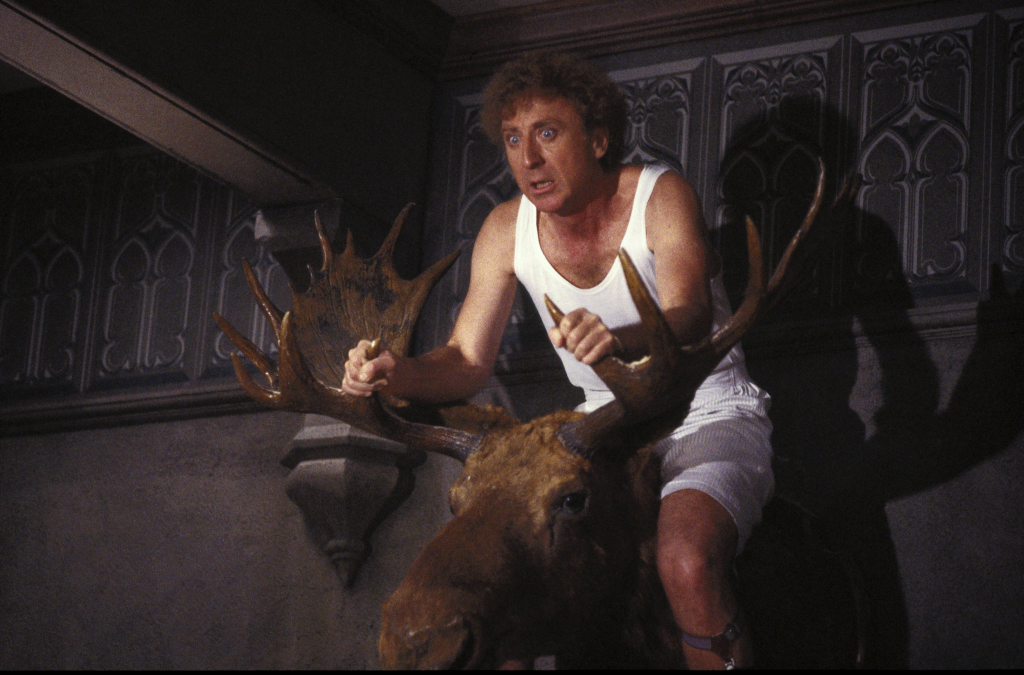