Beloved Actor as Beloved Captain Brings in a Shaky Flight 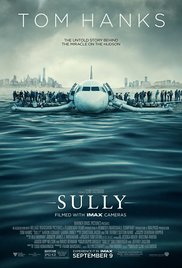 In Sully, Tom Hanks earns his wings straightaway as Clint Eastwood’s version of Captain Chesley “Sully” Sullenberger. Ever since it was first publicly floated that a film detailing “The Miracle on the Hudson” was in the works, the outcries for Hanks to play Sullenberger were unanimous and undeniable.

So much so that, despite the fact that the physical resemblance isn’t there at all, both Hanks and Eastwood were game to accommodate. Perhaps it’s because we, the filmgoing public, are just that used to the notion of Hanks making good at the helm of a besieged vessel (Apollo 13, Captain Phillips). Perhaps we just wanted to see him, America’s most beloved leading man, pull off this famously impossible yet true feat.

Whatever the case, like Sully himself, Hanks proves to be the right man for the job at the right time. Even as that job is primarily one of him being plagued by his own conscience. Things are rattling around in that stoic, man-of-few-words head of his. Unpleasant things. Living things.

There’s something randomly pelting away at director Clint Eastwood’s unsteady Sully. It might not be the flock of feathered fiends that took out both engines of US Airways flight 1549, resulting in the “Miracle on the Hudson” water landing of January 15, 2009. That is the incredible event on which this film is based – a true-life “money-sequence” if there ever was one. Thanks to Todd Komarnicki’s screenplay’s chronological gymnastics, which are as effectively off kilter as the landing itself, we get to experience it twice, from the passenger’s perspective, and then again in the cockpit. But there is bombardment to the film nonetheless, and quite unrelentingly. It sounds a lot like… guilt. 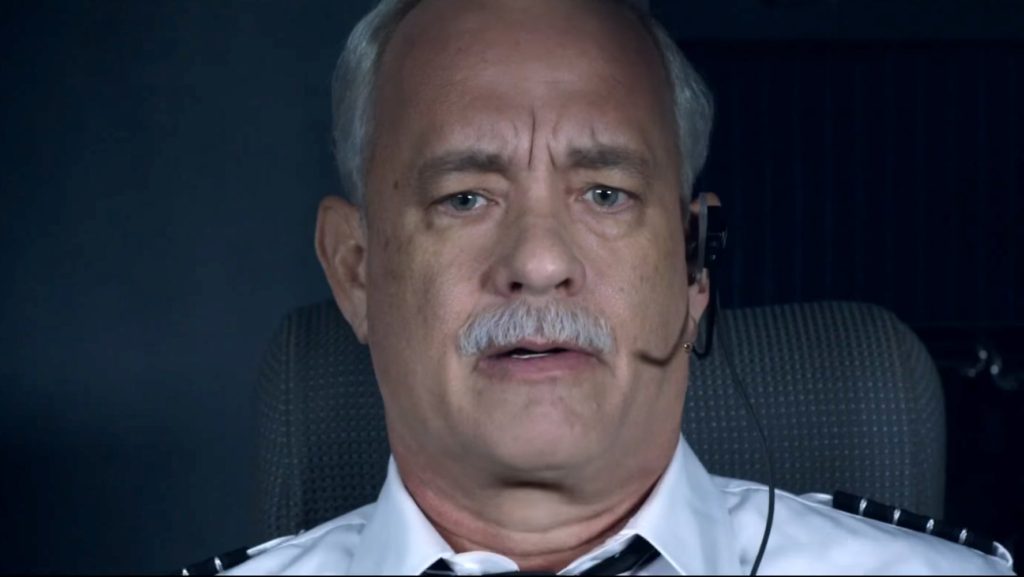 So goes the loud chilling chant of the flight attendants, locked in unison bellowing this order over and over. Is this really the trained doomsday default of airline stewardesses? Whatever the case, seeing the 150 passengers (there were also five crew members aboard) with their heads tucked closely behind the seats in front of them as the plane forcibly strikes the water refutes the conspiratorial urban myth that the sound immediately following should’ve been that of 150 snapping necks.

Eastwood’s standard ruminations on death (See: 95% of his entire film career) translate to a ploddingly guilty conscience, as Sully is put on trial by the National Transportation Safely Board for his unconventional maneuvers that resulted in his miraculous aircraft ditching, which saved the lives of everyone on board. Yes, he executed an unprecedented “miracle”. But was the risky maneuver truly necessary? That’s the question that the NTSB asks, as they clearly have it in for our hero.

Again and again throughout the film’s strange if begrudgingly effective non-linear structure do we witness Sully’s day-terrors, the clear result of a hamstrung conscience. The mere fact that his superiors are convinced he did wrong is more than enough to tie his conscience up in knots the entire movie.

Hanks and Eckhart stand trial by the NTSB.

When I was a kid of thirteen or so, my friends and I rode our bikes to a nearby big box store. Some of us were outgrowing G.I.Joe action figures, some of us were not. While some of my cooler friends had their backs turned, I bought one. I packed it into my backpack, under my winter coat. The minute we were out the door, the manager chased me to a stop, patting my back more than a little suspiciously. Never mind the crinkle of the plastic shopping bag and receipt, he demanded to know what was in my jacket. I was already feeling guilty for no reason when I heard one of my best friends utter, “I can’t believe it.”

Now, I was always a good kid who’d never dream of taking something that didn’t belong to me. Everyone knew it, especially that friend. Yet, the fact that he, in that moment, thought I stole something was enough to convict me as though I’d really done it. In retrospect, this might’ve been the beginning of the dissolve of that friendship.

Sully, as he comes to defend himself, knows that he did nothing wrong. Yet, more vivid visions of what if he had failed. More planes piloted by him and his affable First Officer Jeff Skilies (Aaron Eckhart, in inspired form playing a lighter part that Hanks himself would’ve been more at home with two decades earlier) careen downward into various buildings and streets of New York City, major disasters that never happened.

(For what it’s worth, Sully’s greatest fears can be enjoyed in IMAX, as portions of the movie were filmed that way. This review, however, is of the standard screening format – which, at any rate, is not lacking in its own right with this material.) 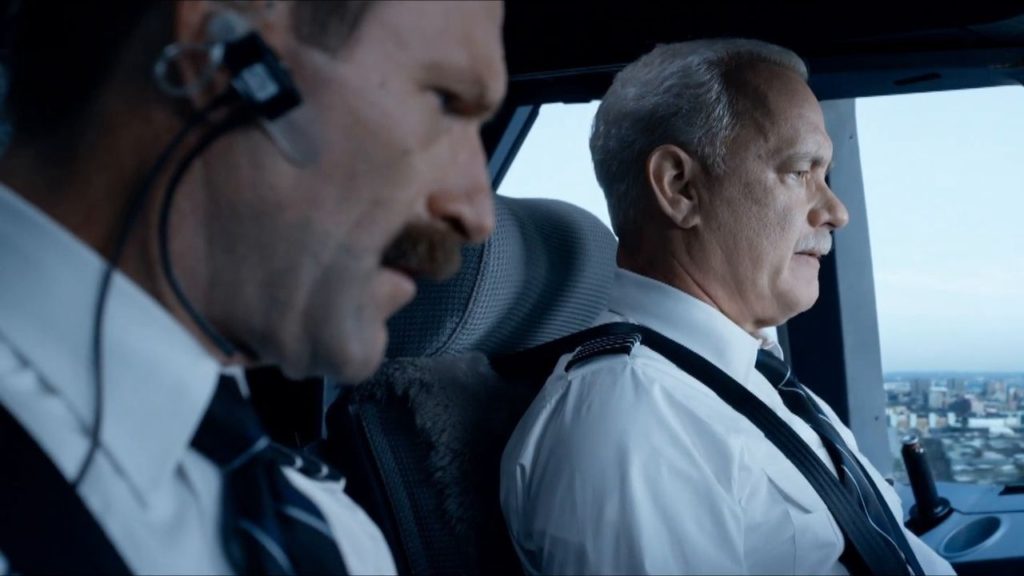 Sully, meanwhile, continues Clint Eastwood’s latter days sideways search for true heroes. 2009’s Invictus lauded Nelson Mandela, a man not in need of further lauding. 2014’s American Sniper venerated the late military marksman Chris Kyle, a man in increasing need of veneration. With Sully, Eastwood is venerating “Sully” Sullenberger, a man not in need of venerating. For every filmgoer who knows the story going in, he’s already an unshakable hero. Sure that perception was media-crafted from the get-go, and Sully is keen enough to show it. The only unbeliever is the man himself, up on screen. He has to come around the fact that he did nothing wrong, and was only doing his job.

From that Howard Hawks-ian adage arose a tale of true hope and wonder that simply had to become a movie starring Tom Hanks. Did it have to be this movie? I’m actually mostly okay with Sully, as (pardon this) sullen as it can be at times. But, as frustrating at the motif can be, I related to his guilt, his what-ifs, and why he makes it all his burden before finally emerging with self-confidence.

Eastwood has landed a sometimes repetitive, sometimes disheveled tale, full of unnecessary flashbacks and distracting detours. It’s a middling-to-decent effort in his directorial filmography, if also a compulsively interesting one in that sense. This is Eastwood the libertarian putting bureaucracy on trial. (Spoiler: It loses.)

Sully, however, belongs to Hanks, who against all odds disappears into the role. He proves again that he can turn a crashing vehicle into a vessel of legitimate inspiration and hope.