#52FilmsByWomen: THE BARKLEY MARATHONS: THE RACE THAT EATS ITS YOUNG 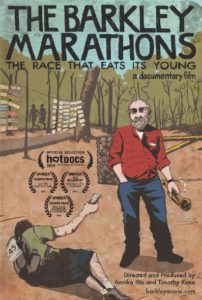 I am a hobbyist runner, currently working to reach a 10k distance. I love running, but I am an absolute lightweight in the company of marathoners and half-marathoners. As for ultra marathoners, I know some and they seem like super heroes to me….or mad men.

The Barkley Marathons definitely seems like a race for super heroes and mad men. Even starting the race, much less finishing, is a feat that straddles the fine line between greatness and insanity. And the insanity – or I could politely call it eccentricity – starts with the race director. Lazarus Lake (aka Gary Cantrell, but the comic book name fits the film better) combines a folksy demeanor with a wicked, possibly sadistic, sense of humor. The race was inspired by James Earl Ray’s escape from Brushy Mountain State Penitentiary in Tennessee. Ray eluded authorities for 55 hours but made it only 8 miles from the prison in the thickly wooded mountains of Frozen Head State Park. Lake, himself an ultra runner and Tennessean, boasted that he could have covered 100 miles in that time, and the idea for the Barkley Marathons was born. The first official race took place in 1986.

Co-directing documentarians Annika Iltis and Timothy Kane seem to embrace the spirit of the race without reserve. Lake and past entrants share the Barkley’s “unique” features – Lake with bemused pride, the runners with a mixture of exasperation and wonder. The race is not advertised, the entry fee is $1.60 plus a license plate from the entrant’s home state or country, the route is ever changing and the route map is cryptic. And then there’s the starting signal, which is Lake lighting a cigarette. It’s not a stunt cigarette, either. Lake remains at base camp smoking cigarette after cigarette as the runners punish their bodies through five 20-something mile loops of briar patches, creek crossings and steep rises.

Finishing the Barkley requires making it somewhere between 100 and 130 miles in less than 60 hours. Only a handful of runners in the race’s 30 year history have finished, and for many entrants even finishing one loop is impossible. It’s a ridiculously challenging feat, which raises the question of why anyone wants to attempt it. Lake points out that a high proportion of the runners have graduate degrees – they are high achieving people who are compelled to push themselves to the absolute limit. There’s also genuine camaraderie among them, and watching runners who have dropped out attending to the runners who remain in the race is actually kind of moving.

I don’t know that there’s anything profound about this documentary. Is there a point to this endeavor, really? Is there a good, rational reason for risking life and limb in those mountains? Maybe not, but some human beings seem wired to try the impossible until they make it possible. And in the case of  The Barkley Marathons, watching them try is compelling viewing. 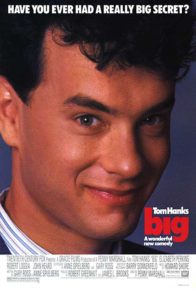 It’s no small feat to believably play a child in a man’s body. In the wrong hands such a performance could seem either completely false or worse, creepy (see Martin Short in Clifford). Tom Hanks, at this point in his career, was just right as a 12 year old boy get his wish to be “big”. The movie manages to be sweeter and even sadder than such a premise might suggest, and the risky elements (in particular, sexuality) are handled by Marshall with thoughtfulness and care. But Big is also funny and genuinely delightful. The scene in which Tom Hanks and Robert Loggia play a duet on a giant keyboard remains a classic moment of pure film happiness.