FILM Review : THE LADY IN THE VAN 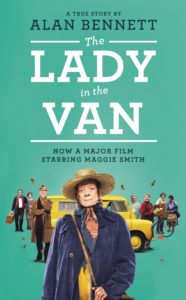 This movie is fine, but shouldn’t it be “The Lady in A Van“?  After all, there’s nothing particularly significant about the van that the homeless woman of the title, played by Maggie Smith, occupies.  There are in fact, over the span of the story, multiple vans.  Perhaps “The Lady in the Vans” would be more accurate?  (If also that much more cumbersome).  And while we’re at it, is it fair to elegant women everywhere to refer to this cantankerous, ungrateful biddy a “lady”?

If such internal squabbling seems an uncouth or improper way to launch into the review of a respectable adaptation of a respectable stage play and memoir by the respectable Alan Bennett, you’d be correct. That is, generally speaking. It is in true “Brit-sploitation” form that The Lady in the Van exists to mildly scandalize the high-end art house crowd with such expected subversions: Dame Maggie Smith reeks! Her defecating is a regular topic. She shows up one day unannounced in playwright Bennett’s driveway, and then she stays for fifteen years. She coarsely rejects most any sympathy, handouts, and attempts at friendly icebreaking. She may or may not be on the run for a hit-and-run killing. It’s a wry comedy.

Ever since those salty low class English gents of The Full Monty opted to drop trou on stage (showing their rear ends to the camera and everything else to the cheering crowd in front of them), skewered British properness has become a comedy sub-genre unto itself. Take however many established British actors of the high order, insert them into a homespun scandalous situation, and boom, you’ve got Calendar Girls, Mrs. Henderson Presents, Waking Ned Divine or what have you. They’re just so British!, so British, yes they are! 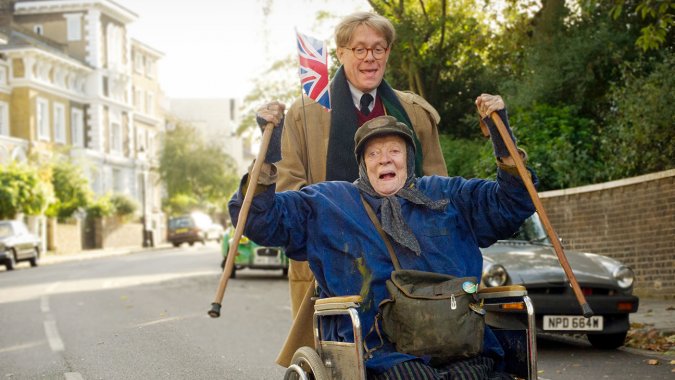 “God Save the Queen!”

The Lady in the Van is better than most of its comedy bus-mates. Beneath it’s well-made bed of upper class frustration, intellectual back-and-fourths between Alan Bennett and himself (the observant writer versus the more common version who goes and does things, both played by by a dourly Alex Jennings), and the arbitrary whimsy of Smith’s character painting everything crazy bright yellow (with a scrub-brush, no less), there’s an enjoyable spunk to director Nicholas Hytner’s film. And maybe a good social message, too.

Hytner, it should be mentioned, is no stranger to Bennett’s work. Bennett adapted The Madness of King George III, The History Boys, and now The Lady in the Van, all his own plays, for the screen; each then directed by Hytner. More informed Bennett aficionados may note certain crossover among this and the lesser adaptation, The History Boys. Or so I’m told by a fellow film critic who knows these things. In any case, even without that extra layer of knowledge, Van proves mostly enjoyable, even through its loaded persnicketiness and carted-in whimsy. Hytner’s touch is confident, willing to take risks, nonetheless uneven enough to be noticed. He does like that color yellow, that much is inescapable.

As one may guess, much of the film’s success rides with Maggie Smith, apparently aging up to play the vagabond drifter Mary Shepherd.

Miss Shepherd’s own history, including knowledge of any next of kin, is a closely guarded secret, and any “humanitarian” attempts to get to engage her or even offer her food is often met with crass dismissal. Probably because the film understands that despite any best intentions of the locals Miss Shepherd shuns, their efforts are rooted in the sorriness of superiority and do-gooder condescension. When a neighborhood woman knocks on the van to give Shepherd a crème brulle, only to see it immediately tossed aside, we instinctively laugh with the title character, not at her. 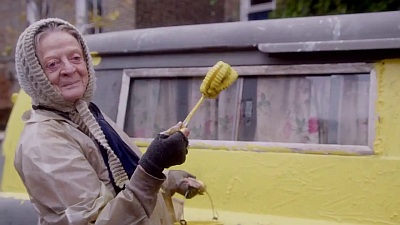 This is all based on something that supposedly happened to Bennett. Being that reality doesn’t always lend itself to tidy cinema interpretation, its shortcomings are made that much more understandable, even forgivable. Bennett‘s own struggle with self-identity as a gay man knocks around the inexplicable situation of this strange woman’s vehicle taking longterm root in his driveway, but the two threads never quite find a synch-point. This is, however, especially noteworthy, considering the Catholic symbolisms inherent in Mary Shepherd’s name, and how they indeed reflect her own religious beliefs – even if it does sound quite often like a looney, breathed-on interpretation of a familiar faith. Most any denomination of Christianity is said to be on the downswing in England and beyond into all of Europe. Yet, here we have a story that hinges on its character’s devout beliefs in the Father, the Son, and the Holy Ghost. Just don’t ask me how.

Regardless of its title, The Lady in the Van is the closest thing to Brit-sploitation done right that I’ve seen in a while. There’s a market for this stateside, however niche, and the makers of the movie must know it. Whether said audience is motivated to leave its own driveways to take this ride is another story altogether. In the meantime, they can always haggle over the title.