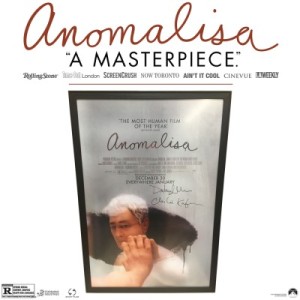 I have a friend who, after seeing an ambitious but puzzling film, will say, “I don’t know what it’s saying, but it’s saying something!” Such a response comes naturally after seeing a Charlie Kaufman film (Being John Malkovich, Eternal Sunshine of the Spotless Mind). Kaufman has built a screenwriting career with films that alternating dazzle, exasperate, and baffle audiences. I won’t tell you what the audience members around me were saying at the end of Anomalisa – which Kaufman wrote and co-directed with Duke Johnson – but there appeared to be a lot of bafflement, and a fair amount of exasperation. I understand: I had those reactions, too. But I was also dazzled, and wanted to understand what I’d just seen, wanted to sit down and talk to people who’d seen it as well, wanted to turn the movie over and over in my mind. In other words, I quite liked Anomalisa.

Anomalisa is done with stop motion animation: beautifully realized, but with enough jerkiness to remind viewers at every moment that they are watching something real, something that can be touched – not just digital images. It’s a remarkably natural, tactile looking movie; but with an alien, otherworldly tone. Michael Stone (David Thewlis) is visiting Cincinnati for an overnight stay, book as a speaker at a customer service convention (he’s written a book called “How Can I Help You Help Them?”). From the moment he exits the airport in what a garrulous cabbie calls “Cin-Cin-City”, Michael seems weighed down by weariness, frustration and boredom. From that cab driver to the concierge at his hotel to the bellboy who helps him with his bags – everyone seems the same to Michael, and they’re all tiresome.

Several times in the course of Anomalisa Michael says that he thinks there’s something wrong with him. At first I thought he was wrong: clearly he was the sole normal human in this world in which everyone has the same voice (marvelously delivered by Tom Noonan) and the same blank doll face. Everyone, that is, except one young woman Michael hears in the hotel hallway. Lisa (Jennifer Jason Leigh) has a distinct voice, distinct face, distinct form – and that’s all that Michael wants, or thinks he wants. Eventually it becomes clear that Michael was right – there is something wrong with him. An understanding of what is wrong with Michael and how it’s shaped his life unfolds through the rest of the film, but Kaufman fans will have a head start on understanding Michael. Charlie Kaufman is a master at creating depressed, isolated male characters.

Michael may be the central character in Anomalisa, but Lisa is the heart and soul of the film. She is plain, has body image issues and a low paying job. Lisa tells Michael that she’s not smart and her banal conversation seems to confirm what she says. Even so, she is open and free in a way that the more successful Michael can only dream of being. A scene in which Lisa sings “Girls Just Wanna Have Fun” could tear your heart out with her guilelessness. The character only works because of Leigh’s amazing voice acting: she is the best thing about this movie. 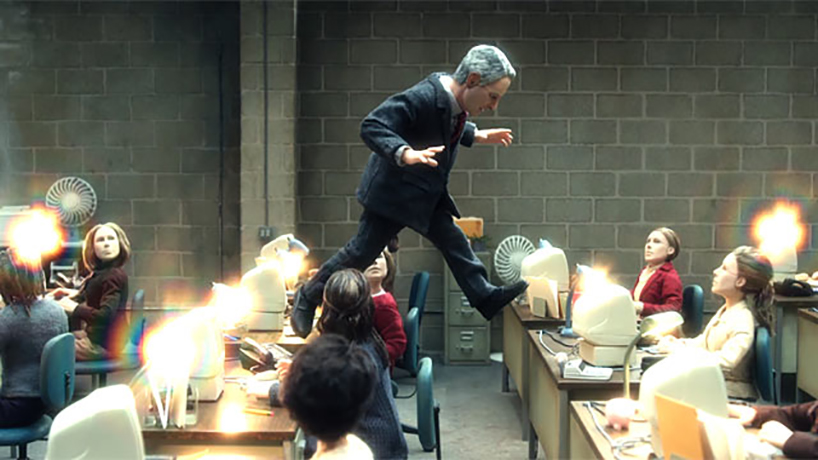 Anomalisa is eerie, funny, sad, and raw. As in 2013’s Her, a story about an emotionally stunted and isolated man winds up revealing truths about all of us – about loneliness and the ways in which we sabotage our own possibilities for connection. It’s not an easy, accessible movie, but it is definitely saying something.

Note: Anomalisa is rated R for sexual content, nudity and language, and that rating is sound. Yes, you’re watching puppets, but the sex scene is nevertheless very intimate and realistic – producing some discomfort in the crowd sitting around me at the screening. Let the viewer beware.