Will Smith Takes On The NFL 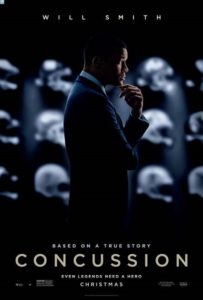 A more cynical filmgoer would likely say that there’s a lot wrong with Concussion. And that opinion would not be incorrect. But that said, a longer look at it under the microscope might just reveal a thing or two…

Sometimes an obviously flawed movie with redeeming qualities is more interesting than a glazed-to-perfection cinematic bauble. This came to my seasoned critical attention several years ago, around the time of Alfonso Cauron’s Gravity, while watching a very different film, Ron Howard’s 1970s racing biopic, Rush. Despite the former being the better movie in every way, that fact remained that once the sensation of experiencing it’s brilliantly crafted 3D IMAX sensations had passed, it was easy to move on. Meanwhile, I found myself grappling with Rush for the better part of a week. Not just grappling with it, but enjoying the grapple.

Therefore, I concluded, that that imperfect film is, in some odd, bizarre-to-acknowledge ways, more valuable to me than Gravity. Since this strange realization, I’ve let myself be increasingly open to the rewards of flawed films. Nevertheless, Rush did not make my top ten of that year, while Gravity did. Yet to this day, Rush is the one I find myself wanting to return to, cringe-inducing moments, and all.

“Concussion” is set up to be an unflinching version of a recent U.S. David and Goliath type of battle – a little guy against a massive, bullying, smug, immovable corporate institution. More power to it.

Despite Concussion‘s numerous imperfections and occasional irritations, I really liked itmovie anyway.  Yes, it’s a big blatant star vehicle where the lead (Will Smith) can do no wrong. Yes, it’s “based on a true story” – that forever easy beacon of perceived dignity. And yes, it’s full of old fashioned notions of faith and American exceptionalism. But somehow, it doesn’t get improperly mired in those things, and very much maintains the courage of its convictions. 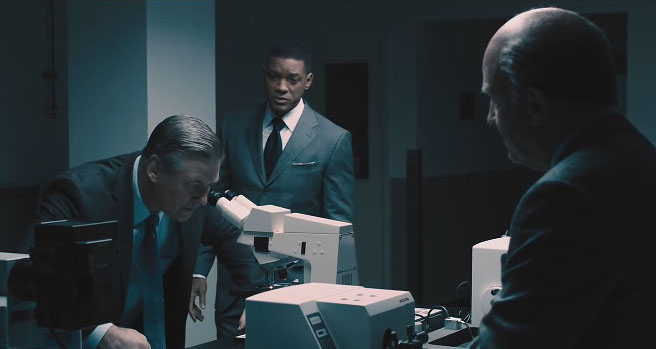 And what convictions they are. Concussion is a ballsy film, challenging the NFL in the way that The Insider initially challenged the cigarette industry – by telling the real-life challenger’s story.  As expert characters in the film (played by Albert Brooks and Alec Baldwin, among others) attest, millions of Americans love football, and don’t want to hear the accusations that are leveled. Because of the fierce devotion of the fans, the NFL is a financial behemoth that can and will crush any naysaying opposition, regardless of who has science on their side.  In other words, “Concussion” is set up to be an unflinching version of a recent U.S. David and Goliath type of battle – a little guy against a massive, bullying, smug, immovable corporate institution. More power to it.

In the early 2000s, a humble, extremely well-educated coroner from Nigeria, Dr. Bennet Omalu, discovered that the repeated blows to the head suffered by professional football players are causing debilitating concussions far more often than the National Football League would admit. After a rash of strange deaths of former NFL players brought on by mental breakdowns in Omalu’s adopted hometown of Pittsburgh and elsewhere, he puts his pathology skills to work, scientifically making the case that American football is turning players’ brains into jelly. When the system won’t pay for the necessary battery of medical tests that Omalu requests in order to solidify his findings, he is told that he’d have to pay for it all himself, a cost of many thousands of dollars. As a Christian man simply seeking to live the idealized “American life” that he’d heard so much about in Nigeria, the Omalu of Concussion doesn’t hesitate to pony up the funds.

The test results don’t lie – as the many scenes of actors looking into microscopes, coming up concerned, then looking down again attest, playing football can eventually be fatal. Omalu, as played by Smith (respectably attempting a Nigerian accent) is naive enough to initially believe that the NFL will be grateful for this information. When he spends the rest of the film as the target of their powerful retaliation, it’s a prolonged wake up call that the U.S.A. might not be what he thought. 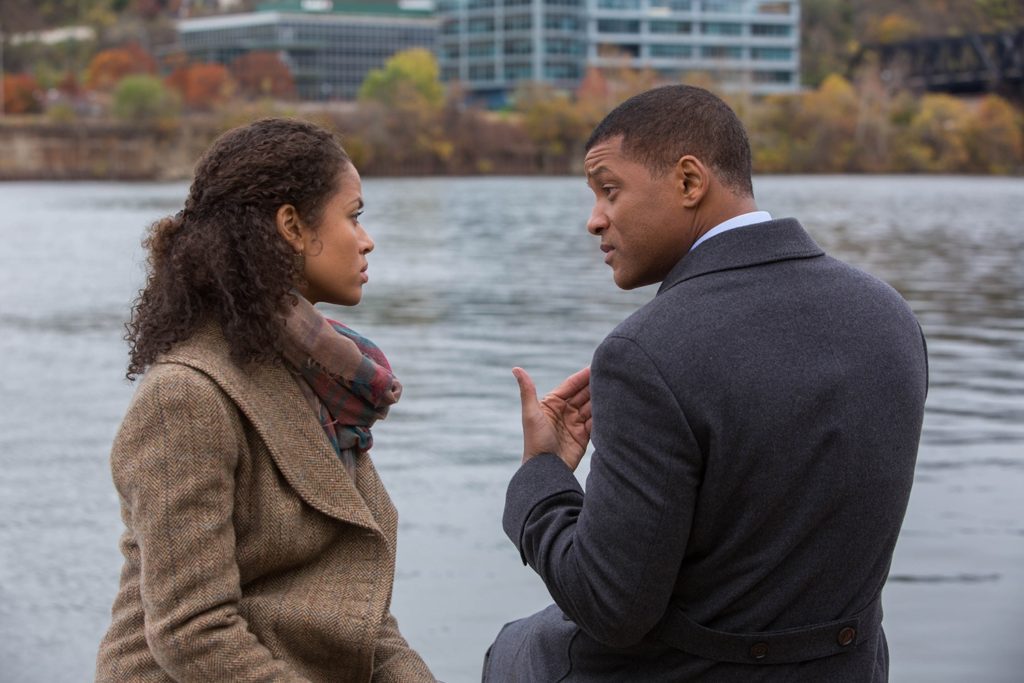 Still, his spirit is unbroken. It helps that he falls in love with and marries (although not necessarily in that order) a woman played by Belle star Gugu Mbatha-Raw. Their courtship is a functionally cute subplot, evolving from her moving into his home as a stranger, becoming his no-nonsense encourager, looking to him as a mentor in a strange land, and apparently remaining chaste all the while. It’s yet another unconventionally “safe” element that lends Concussion the air of some sort of contemporary faith-based movie. That is, until Albert Brooks sees fit to drop an f-bomb or two.

Bearing all the expected gloss and house-look of Scott Free Productions, which had a big hand in making the film, Concussion is not an inexpensive project by any stretch. As often as its screenplay steers the film into Hollywood cliché territory (some moments of which I found dopily endearing, others were as maddening as ever), director Peter Landesman (who’s only previously helmed work is 2013’s poorly received Parkland) keeps things moving, never dropping the ball in terms of pacing. As the cast commits to the film 110%, it can’t help feeling like they’re committing to a cause.

Most importantly, Concussion moves along well and in an engaging manner, despite having the burden of constantly having to explain everything from complex medical conditions, Smith’s character motivations, and the tyranny of the NFL.  In spite of several offenses, not the least of which is a gawd-awful inspiring speech Omalu gets to give at the end, Concussion is one of those interestingly imperfect films that’s worth having around.