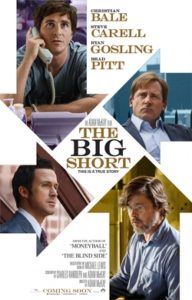 After Spotlight, The Big Short may sport the best cast for a drama this year.  Consisting of Christian Bale (American Hustle, The Dark Knight), Steve Carrell (Freeheld,Foxcatcher), Ryan Gosling (The Place Beyond the Pines,Crazy.Stupid.Love., Drive), Marisa Tomei (The Wrestler, My Cousin Vinnie), and Brad Pitt (12 Years a Slave, Inglorious Basterds), The Big Short documents the true story of several individuals who predicted the collapse of the housing bubble of 2007-2008 in spite of overwhelming evidence to contradict their claims.  In addition to these names, there are even cameos from celebrities consisting of Margot Robbie (About Time, Focus, The Wolf of Wall Street), and Selena Gomez (Spring Breakers).While Spotlight focused on real events, it followed the narrative of an investigative team discovering the truth of a heinous act perpetrated against children in Boston.  While the film clearly cast the acts of perversion done by Catholic priests as being evil, it still wrestled with the moral dilemma faced by the reporters themselves of trying to report on the event, protect the children, but also not demonize the church or faith as a whole.  Here, the film takes a very firm side on its view of what went down in the 2000’s in the housing market prior to the bursting of the housing bubble.  Depending on your vantage point, and political affiliations, this may shade how you view the portrayal of these events.  But either way, The Big Short hopes to deal with this event from a morally superior vantage point, and by having a lot of fun in the process. 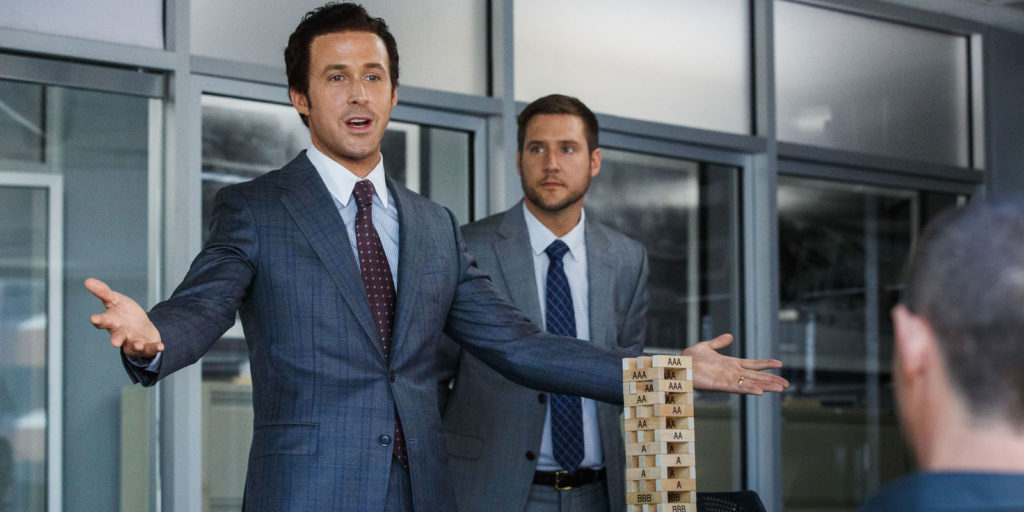 The film itself knows it is dealing with a subject matter that would be over the heads of the average viewer, who may not have even had an economics class in high school depending on when and where they attended.  But to understand what takes place in the film, such a basic understanding is needed.  To help explain some of these complicated issues in a way the average viewer can follow, the film breaks the 4th wall by having Ryan Gosling’s character, Jared Vennett, who is also the narrator, speak directly to the viewer about the difficulties of such concepts before throwing the camera to one of several celebrities to help explain these concepts to us.

There is a chef who explains how downgraded bonds are repackaged as AAA rated bonds for purchase despite being anything close to that, using a halibut stew as his example.  Selena Gomez explains economic concepts through the use of side bets at a casino on the performance of players of a card game.  Finally, Margot Robbie explains her assigned concepts while drinking champaign in a bubble bath as a way to make these dull economics “sexy”. Ryan Gosling’s Jared Vennett even talks to Carrell’s Mark Baum using the game of Jingo.

The film is able to ingratiate itself to the audience through such humorous and self-deprecating tactics so that when the real events start happening and get quite serious, the viewer is ready to see it through.

Christian Bale is Michael Burry, a medical doctor turned financial investor, who is quite eccentric.  Never wearing shoes at the office, and drumming to heavy metal songs that he blasts at the office, Michael is the resident genius who was hired in spite of his peculiarities since he makes the firm so much money. He instructs his assistances to bring him all of the reports of repackaged mortgage “bundles” that they can get their hands on….the type of reports NO ONE ever reads.  He finds a pattern that he finds disturbing and learns that if he “shorts” the housing market, by basically betting with the banks that the entire housing market will collapse, he stands to make an astronomical figure.  Based on his research, he believes it will happen.  For the large banks like Lehman Brothers, Bear Sterns, and others, they can’t find any possible scenario where his prediction plays out and are all to happy to take his money and the monthly premiums he will be contractually obligated to pay if the big collapse doesn’t happen.

Steve Carrell is Mark Baum, a doom and gloom guy at a different firm, who is foretold of this same possible scenario by Jared Vennett (Ryan Gosling) who works at a bank but who is betting against the banks position by using his offer to Mark’s team to secure them the big money and a cut for himself.  Baum’s suspicions cause him to constantly research Jared’s claims to verify their believability.  He, along with his team, begin looking at the increased amount of bank foreclosures on people in Miami who never should have qualified for a loan to begin with, or who are being taken advantage of by greedy and fraudulent landlords and investors. 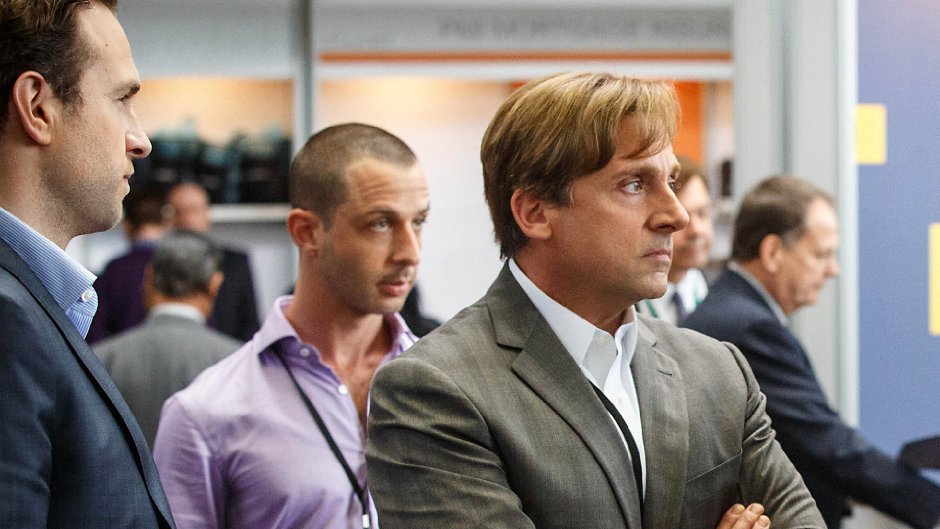 Finally, Brad Pitt plays Ben Rickert, a burnt-out Wall Street investor whose two small-time investment neighbors bring him the evidence of the impending collapse of the market needing him to legitimize their small investment firm so that they can begin betting on shorting the housing market on Wall Street as well. He serves as a mentor, but also is quite paranoid of the U.S. government creating a very eccentric character throughout.

Each of these scenarios are weaved in an out of one other finally culminating at a yearly investment conference in Las Vegas where all 3 groups attend.  As the stories weave in and out of one other, the viewer is given a bigger and bigger view of the culpability of the entire banking and investment sectors and their disregard for the American people.  Turning the idea of Wall Street’s greed on its head is the notion that these sets of individuals who are looking to score big by “shorting” the market, and betting to win when the entire economy collapses, are actually engaging in seeking obscene profits only when it involves the demise of others… the very same thing they think they are crusading against. 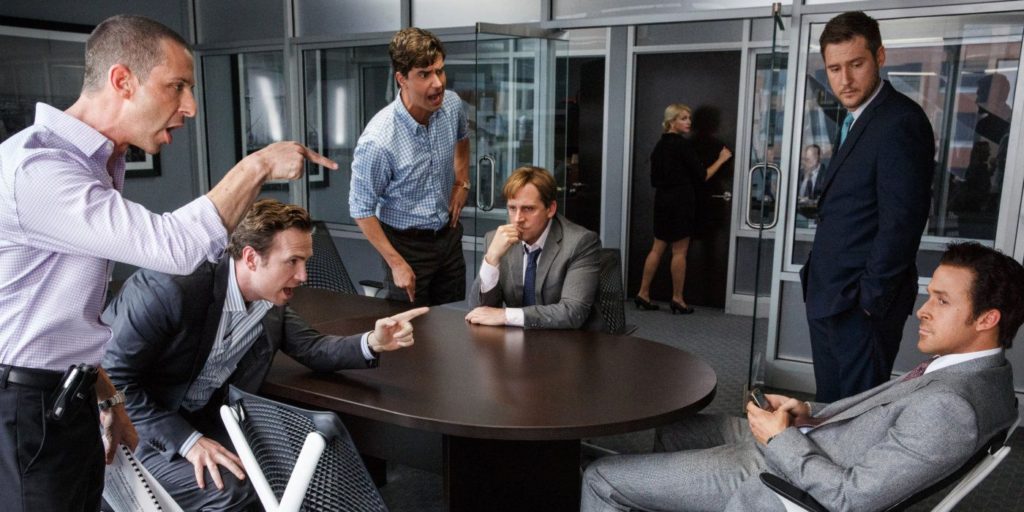 The film is well acted, and well paced with enough humor to balance the serious and extremely detailed nature of the subject matter.  It seeks to assign blame where it morally sees fit, in light of the historic situation from a few years ago, without really offering a solution for moving forward.  Instead, it simply seeks to let the viewer chew on the notion that there is no solution, only future examples of history being doomed of repeating itself over and over again because the human heart doesn’t want to listen to the warnings.  Not when potential profits are on the line.

These select group of individuals warned an entire industry of a pending collapse and were ignored.  The filmmakers see their role as warning us again, but carry out their narrative with a perceived assumption that we really won’t learn anything either.  If enough people go out to see this film, then like their protagonists, the studio too will profit, as we spend our money on their product before our potential economic demise once the credit card bills begin to arrive following the holidays.  Either way,The Big Short, like Spotlight, is a film that deserves to be seen.