For Guillermo Del Toro, the Blood Cries Out From the Ground For Vengeance 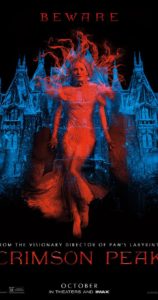 In the opening book of the Jewish scriptures is a story of two siblings.  One does what is right in the eyes of God, and the other does not.  God looks favorably upon one’s offering and the other is told that if he does what is right, that God will also find favor with his offering.  Instead of altering his ways, the slighted one instead murders his brother out of jealousy.  When God inquires of the murderer where his brother is, the reply is the chillingly flippant phrase known in our culture…”am I my brother’s keeper?”.  God’s reply is equally chilling: “What have you done? The voice of your brother’s blood is crying to me from the ground…” (from Genesis 4:1-11) The scriptures go on to describe how our sins will find us out.  Cain, who killed his brother Abel becomes a wanderer as the ground is cursed for him.  So he wanders, haunted by the violence he perpetrated on his brother. Haunted by the blood crying out from the ground, asking for retribution.

Many stories from our time are of people being haunted by guilt, or living in the shadows so as not to let the dark details of our evil deeds come into the full light of day.  And who is a better visual storyteller than Guillermo Del Toro to bring to life a story of the ghosts of one’s past coming to life to have vengeance for the blood that has been shed and is still crying from the ground for justice? 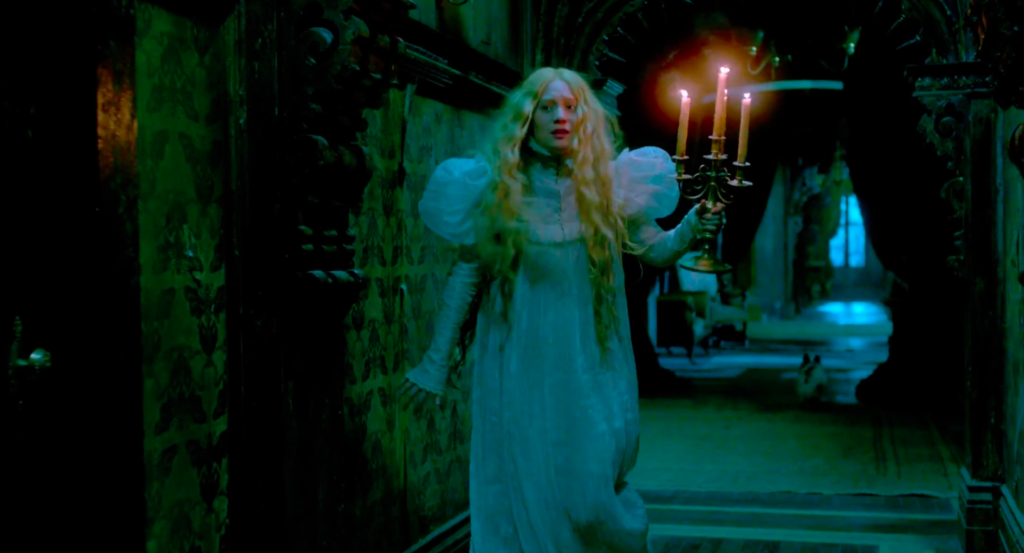 Crimson Peak tells the story of Edith Cushing (Mia Wasikowska-Stoker, Tracks) who lost her mom at the young age of 10 years old.  Visited one night by her mother’s ghost, she is warned about “crimson peak”.  Fourteen years later, she longs to be a writer, something many women could never hope to do at the first part of the 20th century.  Despite her father’s wishes that she engage in society and enjoy the wealth that he has built, she seeks to carve her own path until meeting British Baronet Thomas Sharpe (Tom Hiddleston-Only Lovers Left Alive, Thor, The Avengers) who has travelled from England seeking financial backing for an invention of his that will help extract clay from the ground in a revolutionary manner.  Thomas also is traveling with his sister Lucille (Jessica Chastain-The Help, The Martian, Interstellar). When tragedy again strikes Edith’s life, she eventually finds comfort in the arms of Thomas whom she marries and travels back to England with to live in his broken-down estate as he tries to get his clay machine to work.

It is here, in this mansion that Guillermo Del Toro begins to really go to work.  The red clay beneath the mansion allow for Del Toro to play with old horror pallets in new ways.  The red clay serves as an explanation for why the walls appear to bleed, or why red liquid spews through the pipes like blood, recalling old horror films like The Amityville Horror. But Del Toro is not making a horror film, or even a ghost story, as much as he is making a story that has ghosts in them, much like the fictional story Edith is writing in the film, inspired by her mother’s visit.  In her story, the ghosts are a “metaphor”, and here they are something similar. 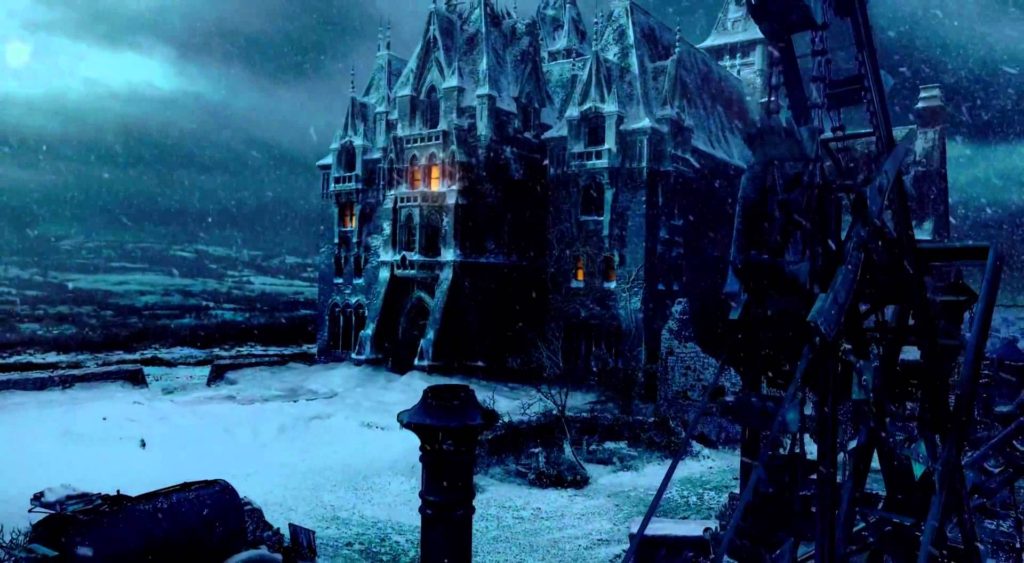 Del Toro’s story is like his classic film Pan’s Labyrinth, in that it is visually striking. Each shot is framed like a painting with the gothic architecture of the house itself creating its own creepy labyrinth that Edith must find her way through.  The swaths of red against white snow, or a yellow dress against a grey winter day, are vivid. In IMAX, they are strikingly so. And like the story of the two siblings and murder that populated the scriptures, here we have a story of two siblings and murder, wrapped up in a mystery that must be unfolded, in a manner reminiscent of the Harrison Ford thriller What Lies Beneath. The fact is that for the scriptures, and for Del Toro, one’s sins will find them out. And the blood of the slain is still crying out from the ground seeking vengeance and justice.

Wasikowska and Hiddleston reunite here, after both working together on the fantastic Only Lovers Left Alive. Chastain, who worked on the Del Toro produced horror film Mama, and with Wasikowska onLawless, joins both Wasikowska and Hiddleston creating one of the strongest casts to work on a horror film in years.  Wasikowska, who is always interesting whether she is doing more classic fare like Alice in Wonderland or Jane Eyre, or performance driven films like Stoker and The Kids are Alright, balances her character as both a romantic, as well as an independent woman pushing the gender roles of the time period.

Hiddleston, who is known for his charming but sinister character Loki in the Marvel films Thor, and The Avengers, is able to layer his character in such a way as to keep you guessing his true intentions throughout the film.  The real standout performance, however, belongs to Jessica Chastain who is perfectly cold and calculating whether she is playing piano for a room of socialites, or whether she is brewing tea for her sister-in-law Edith. Each scene she is in is filled with perfect tension, whether ghosts happen to be there or not. 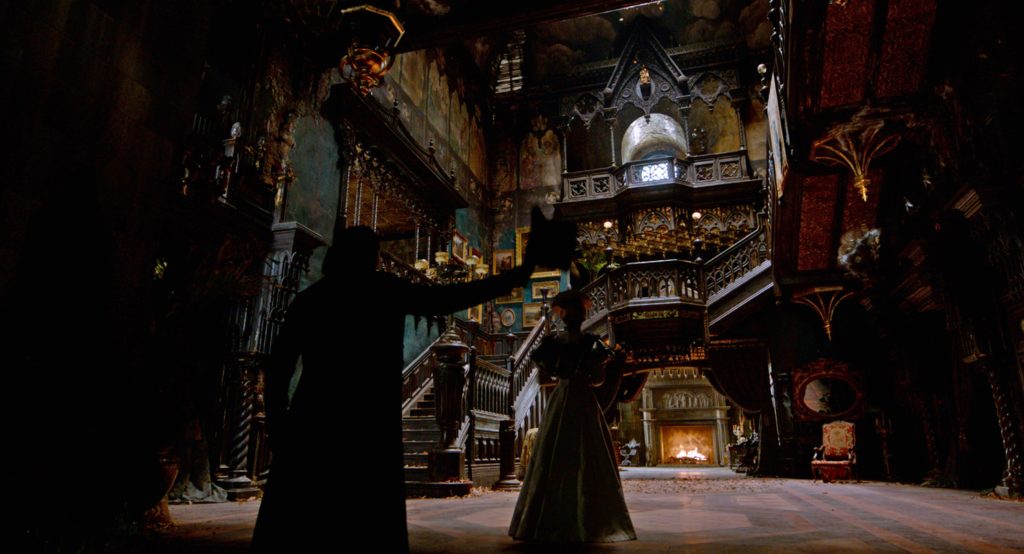 For modern horror-film lovers, Crimson Peak may not be the film they are looking for.  This is a story-driven mystery, that slowly burns its way to its ultimate conclusion.  It happens to have ghosts in it, but it is not a ghost story.  It does not rely on the typical jump scares that populate the modern-day pop culture horror films.  That is not to say that there aren’t elements of these strategically placed throughout the film, but they are not the main driver of the dread that lies beneath the crimson peak.  That is reserved for the blood crying out for vengeance and justice and the story that two siblings are trying to keep from coming into the full light of day.