Al Pacino Has the Keys, But Does He Open the Right Doors in This Film? 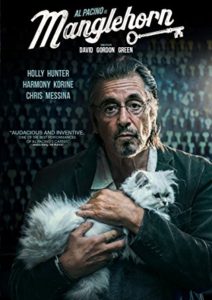 Manglehorn is the latest effort from director David Gordon Green who scored a critically appraised film with Joe in 2013.  Also known for such efforts as Pineapple Express and Prince Avalanche, Green keeps his latest film in the darker world of a lost soul searching for another chance of love.

Al Pacino plays A.J. Manglehorn, a keysmith in a Texas town.  Manglehorn is definetly weathered, and fond of the drink.  Through slow, plodding glimpses and small details emerging from various conversations, we gather that he is divorced, and estranged from his son Jacob (Chris Messina-Argo,Cake) who is a successful businessman who looks upon his father with extreme disdain and pity, still angry over the way Manglehorn treated his mother.  We also discover that Manglehorn is obsessed with his “love that got away”, who was not the woman he once married.  Complicating things further is a bank teller who Manglehorn speaks with every Friday, named Dawn (Holly Hunter-The Incredibles, Raising Arizona).

Pacino is playing Manglehorn in a much more subdued manner than his typical acting style of calm statements followed by bombastic shouting (“Whoo-ah”) that he has popularized in Scent of a Womanor even Heat (“what have we got?…..WE GOT NOTHING!!”). Manglehorn is a slow burn of a film that dreamily steps its way through the mundane daily existence of one man looking for love after having so thoroughly making a mess of it throughout his life.

The occupation of Manglehorn being a key maker is an interesting one as it allows the object of a key to be a giant metaphor throughout the narrative, both as a tool to open up the possibilities of redemption and love that Manglehorn longs for, and as a weapon to lock away some of his darker secrets.

Like Joe (Nicholas Cage), Manglehorn has a darkness bubbling under the surface threatening his success at every turn.  Where Joe took Cage’s character towards a more redemptive arc in its destructive violence, Manglehorn gives indications throughout the film that it could go either way.  Pacino’s thoughtful interactions with Hunter’s character Dawn border on sweet, and at the same time could easily vacillate to creepy and cruel.  His relationship with his son is contentious, but his desire to forge a relationship with his granddaughter is admirable. His obsession with his oft-ill cat is also a study in contrasts that at times seems ready to push him over the edge. 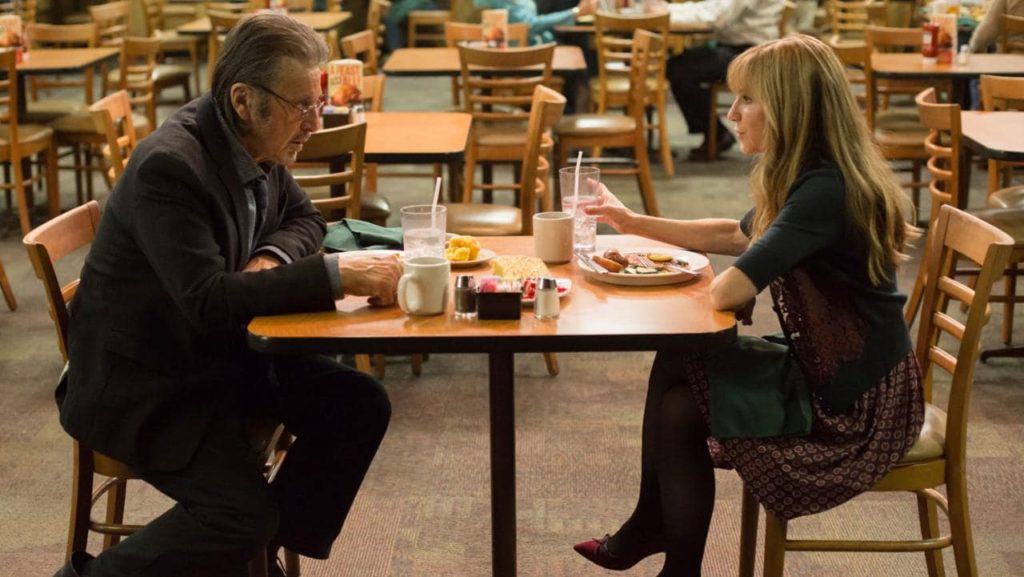 While the film has a lot to say, and sports extremely strong performances from its leads, the story is too weighed down by its pacing.  The balance between compelling character building and boredom is a fine line in this film.  Fortunately, the cast does all it can to tip the scales towards the former, but are almost pulled over the edge by the latter.  The story also suffers from not providing enough interactions between Manglehorn and his son, Jacob.  There is a much more compelling story between these two than the viewer was allowed to see, and only the minimally necessary details remain in the final cut.  The ending is also very disjointed given the very disturbing character flaws that are revealed towards the climax of the film involving Manglehorn’s past failures in relationships.

Manglehorn is a worthy effort of a film, but even its protagonist’s selection of keys won’t ultimately open the right doors for this film to have the kind of accessibility of characters that Joe had two years ago. In the end, this film of strong performances can’t untangle the “mangled” pacing of the film.