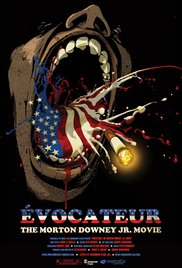 In the days of old there were the Prophets of the Old Testament. Men who were chosen to be the spokesmen for God. Some communicated wild visions with layers of meaning. Others launched powerful rhetoric at a country gone astray, warning them of impending doom, but also promising future redemption (Ezk. 36:22–32). Ezekiel, our website’s namesake, was noted for both fantastic visions and strident admonitions. Sadly, most people paid no heed to ol’ Zeke, but being a prophet, he probably saw that coming anyway.

In the Gospel of Matthew, Jesus warns that false prophets will appear to deceive the people of God. And, oh brother, is that day upon us. Spend an afternoon at the gym to get a sample of the talking heads that have come to infest the seedy niches of cable television. Nothing like FOX News and MSNBC side-by-side to get a centrist’s heart rate up. I might be painfully idealistic in my wishes for more moderate, level-headed political discussion on cable TV. But I have to admit: extreme-wing hosts, right or left, can make for great trash TV.

But before Beck, Hannity, Sharpton and other names that could double for band monikers, there was the original rock star commentator. Before Glenn Beck stared down cameras with an almost psychotic gaze, a man in a live studio in Secaucus, NJ was blowing cigarette smoke into your living room. Before Al Sharpton was in a left-wing echo chamber, he was actually a regular on the most right wing show in the world: The Morton Downey Jr., Show.

In the TV landscape of the late 1980s, the operative words for talk shows were “trash” and “tabloid.” Phil Donahue and Geraldo became famous carting out whatever sub-group of marginalized Americans might do the most embarrassing thing in front of a studio audience. But Morton Downey Jr. was different. He didn’t want to shame trailer park fodder; he wanted to shame politicians, lawyers and whichever white collar might make a bigger paycheck than you. His right-wing vitriol was so incisive, his interviewing so aggressive, his audience so mob-like that it was a miracle he ever convinced anyone to come onto his show. But come they did, one after the other to be lambasted by the Blue Collar King, his minions whipped into frenzy every time an unpopular guest was booted; the way a baseball stadium might erupt if the manager threw the umpire out of the game.

Fighting bull with the American flag.

The documentary Évocateur: The Morton Downey Jr. Movie excellently chronicles the exploits, meteoric rise and abrupt fall of the most divisive person you’ve maybe never heard of. I had no idea who Morton Downey, Jr. was a week ago. In the late 80s I was in the throes of TMNT mania, miles from the foaming mouths of political commentators. Morton Downey, Jr. did not invent the loudmouth conservative shtick, and we’ve had plenty more examples since his heyday, 25 years ago. Évocateur doesn’t try to convince us that MDJ was the first or even greatest, but it does successfully strap the viewer in for a 90-minute wrestling match with a madman. What were his motivations? How far was he willing to go to maintain fame? Did he actually believe what he was saying? Does any good come from the “rally the troops” mentality anyway? Morton Downey, Jr.’s life itself was built-for-TV drama. The famous yet absent father; the friendships with the Kennedy’s; womanizing; booze hounding; fits of rage at random reporters, guests, friends. Some people need their own TV show to exorcise their demons.

While the filmmakers could have easily phoned in Évocateur with assembled footage of Downey’s life—lunatics tend to have plenty of footage of their lives—they’ve instead crafted a creative, well-paced and at times mesmerizing documentary about a controversial yet forgotten figure. In interviews with former producers, celebrities and even former audience members, Downey’s presence is palpable. A narrative emerges that never seems contrived, mostly because Downey lived his life like it was an act to begin with. It’s not all B-roll and interviews, though. Some segments of the film are creatively and bizzarely animated; there’s even an interlude for a song performed live. The filmmakers have expertly matched Downey’s surreal energy with their own. I was reminded of American: The Bill Hicks Story, another documentary about a frustrated man who seemed to have a heart under all that misanthropy.

Love him, hate him, or no idea who he is him, Évocateur: The Morton Downey Jr. Movie is a compelling take on a populist loudmouth. Morton Downey, Jr. may not have won over too many critics in his day, but the film based on his life will certainly keep you tuned in.