Oh, hey! *Taps microphone* Is this thing still on?

Please pardon the interruption of your regularly scheduled programming—just like your favorite podcasts (not to mention TV shows and film franchises), sometimes your favorite column needs to go on a brief hiatus. But we’re back, dear readers, bringing you three more podcasts you’ll love, including a listener recommendation. As you’ve come to expect, these shows fall in these categories:

Behind the Scenes: 3rd & Fairfax: The WGAW Podcast

“Pssh! I knew all of these things! I might as well have been behind the scenes myself.” If this is what you’ve said when checking out the podcasts we’ve shared in Behind the Scenes sections before, then let me present the most inside baseball show about the American film industry I can find.

3rd & Fairfax: The WGAW Podcast is part interviews and part the inner workings of the Writers Guild of America West. With voices destined for radio, hosts Steve Trautmann, Aaron Fullerton, and Brian Gary bring you not just behind the scenes of the newest releases, but also the writing process, how to navigate the industry, and the Guild itself by filling us in on their latest events and speaking with working writers, historians, archivists, and more.

If you’re already working in Hollywood, they’ve got the lowdown on how to best use the Guild’s resources that you probably don’t know about. (So many committees!) If you’re a movie fan with no time spent in California, they’re filling you in on the not-oft-told stories of how the movies you love were made. Either way, you’ll finish episode more knowledgeable than when you started. 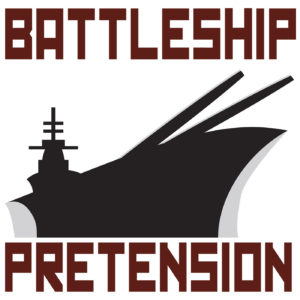 Perhaps you are not familiar with the third pairing on that quick list of impeccable movie-talk duos. Rest assured, Smith & Bax belong in such company, both as critics worth tuning into, and as vocally entertaining hosts that inexplicably “click.” Their podcast, Battleship Pretension (a show title as oddly clunky as it is uniquely clever), has delivered new, full episodes like clockwork every week for well over a decade. That places Battleship Pretension (BP for short) at the beginning of the podcast revolution, dating back to the days well before there were more than enough film podcasts to stock a monthly column such as this one. Many others have come and gone, but BP perseveres for numerous reasons: It’s consistently smart, it’s very funny (comedians are frequent guests, though the hosts don’t need them to generate laughs), and it’s always insightful. The camaraderie of the hosts, longtime friends that preserve in doing the show (and its accompanying website), is infectious.

Based out of Los Angeles, BP focuses on a different topic each week, very often with in-person guests. Oftentimes, though, it is the non-film conversations between the hosts that prove most engaging. When outspoken atheist progressive Bax and Christian conservative Smith hash out issues of the day, the tension in the room can be as thick as their bond. (And here’s your language warning—they do cuss a lot.) Mostly though, it’s mutual respect and understanding that prevails—proving again and again (as hokey as this may sound) that functional, real friendships can endure and even transcend such fundamental differences, even in this terribly tribal day and age. On the whole, both David Bax and Tyler Smith (who’s been interviewed about his book here at ZekeFilm and has guested on ZekeTalk) understand each other, and generally very much enjoy each other. Their love of cinema and doing the show seem to keep them going, to all of our benefit.

Like most podcasts, no one’s making a living off of BP, yet it has a dedicated following with a spin-off series, BP Movie Journal, a sometimes even-better listen than the show proper, wherein Bax & Smith chronicle and chat about whatever films they’ve happened to watch “since the last time they did one of these.” For a busy listener such as myself, it’s easy to fall behind on new episodes, though a good BP “catch-up tear” is always effortless. The hosts let us into their lives and heads in their loose chat format. (The typical BP episode runs well over an hour; Movie Journals sometimes hit the three-hour mark). From their custom theme music (groovy electronic honks and what sounds like a malfunctioning 56k dial-up modem) to their amusingly rigid obsessive-compulsive schedule of topics (every 50th show with an episode number ending in 0 is a career profile episode, or some such), BP is a trusty and consistently terrific addition to any film fan’s podcast queue.

Find the duo and their show at their website. 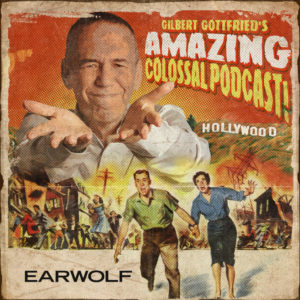 And now for a special shout-out to our reader and Twitter follower who goes by @huquixote. Our regular call for reader submissions in our July piece did not disappoint! While I’m new to the show, I’ve no doubt why someone would recommend Gilbert Gottfried’s Amazing Colossal Podcast.

You probably know Gottfried better by his voice than his face—his signature loud squawking has made him a hilarious, memorable actor and comedian. (I grew up with his performance as Iago in Aladdin, but for some unknown reason, the memory burned in my mind is of his brief cameo in a 1995 Frosted Cheerios commercial.) He co-hosts with writer/comedian Frank Santopadre, and the two lead meandering but well-informed interviews with comedians, actors, musicians, and more entertainment biz veterans. In the episode I listened to with composer Michael Giacchino, the conversation looped up and down and back around, starting with his cameo as a Stormtrooper in The Force Awakens, wrapping around how important it is for him to be inspired by the films he writes for, and tying it up with his favorite classic TV themes.

While Amazing Colossal shares DNA with our Behind the Scenes category because of its interviews and discussion of film and TV history, the conversations are all at once broader and more niche than fare like 3rd & Fairfax. Plus, the informal conversation allows guests to shine with topics they’re passionate about. I’ve hit “Subscribe,” and I’ll be back for more of this amazing, colossal show.

@huquixote isn’t the only one listening to great movie podcasts! Tell us your favorite shows on Twitter or in our Facebook group for a chance to be featured in next month’s column.

Taylor Blake is a contributor for ZekeFilm, including to episodes of ZekeTalk. She co-hosts the podcast SO IT’S A SHOW?, which focuses on Gilmore Girls pop culture references.