An All-Star Cast Can’t Keep This Miami Crime Comedy From Living up to its Title. 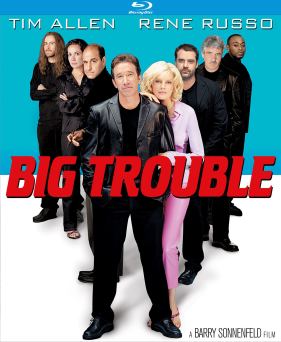 Director Barry Sonnenfeld hit it big with earlier films like the two Addams Family films, For Love or Money, Get Shorty, and Men in Black.  The latter two being his best efforts to date, Sonnenfeld was given the reins to reboot the classic television show Wild Wild West for the big screen, with Will Smith on board after shooting Men in Black together.  Wild Wild West was a disaster.  Just before he got back to safer, sure-fire-hit territory with Men in Black II, a smaller film was released that isn’t as well known, yet features an impressive cast, Big Trouble.  Even though it is stylized in the vein of Get Shorty, being a comedy centered around a crime story, (this time set in exclusively in Miami), it is not as impressive as the cast that populates it.  Based on a book by former Miami Herald humorist Dave Barry, the film version doesn’t have any of the swagger of Sonnenfeld’s Elmore Leonard film adaptation of Get Shorty.  Big Trouble does, however, still have some of the comedic problems that plagued Wild Wild West.

Tim Allen stars as Eliot Arnold, a divorced former Miami Herald writer (based clearly on the book’s author, Dave Barry) who is working as a relatively unsuccessful advertising guy, and having trouble raising his rebellious teen-age son, Matt (Ben Foster- Hell or High Water).  Matt and his friend Andrew (DJ Qualls- Buster’s Mal Heart) are deviously plotting to “shoot” a girl from their school named Jenny (Zooey Deschanel- Elf, Almost Famous), which leads them to her house where she is at home with her parents Arthur and Anna Herk (played by Stanley Tucci and Rene Russo respectively).  Unbeknownst to them, as they wait for their chance in the backyard to spring out and “shoot” Jenny, a couple of hitmen named Henry and Leonard (Dennis Farina and Jack Kehler), are waiting to knock off Arthur, who is involved in all sorts of criminal activity. 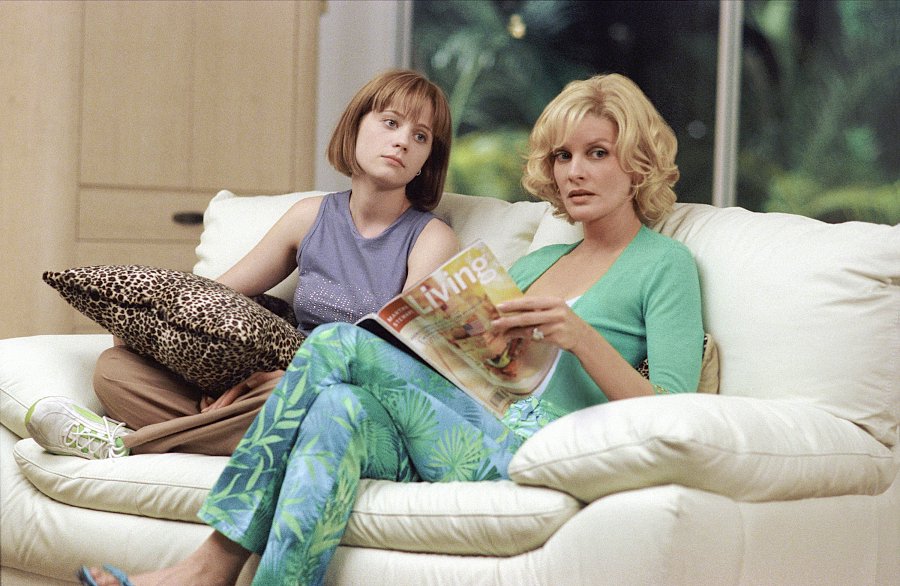 As all of this is about to go down at the Herk home, perched in a tree is a homeless vagabond named Puggy (Jason Lee- Almost Famous) who has drifted down to Miami from Boston because of his love of Fritos, which he believes to be Cuban food.  Since Miami has some of the best Cuban food, he has read, it is the place to be.  He was planning on sleeping in the tree before he was dazzled by the beauty of the Herk’s maid Nina (Sofia Vergara- Modern Family) whom he spotted from his perch in their backyard.  He will be a witness to what goes down. Puggy has also gotten a job at a bar where he first stopped to get a beer and some Fritos- before being assaulted by two local criminals named Snake and Eddie (Tom Sizemore and Johnny Knoxville).

Eventually all of these threads intertwine into One Big Plot that also involves two police officers played by Janeane Garofalo (Reality Bites) and Patrick Warburton (Seinfeld, Get Smart), as well as two agents from the FBI, played by Omar Epps (Juice) and Heavy D (Life). Throw in Andy Richter (Conan O’Brien’s late night shows, Arrested Development) and Martha Stewart, and you’ll have the basis for the mayhem that ensues, culminating in a too on-the-nose plot involving a nuclear weapon at the Miami airport- a detail that led to the film’s 2001 release being delayed by Disney following the tragedy of 9/11. 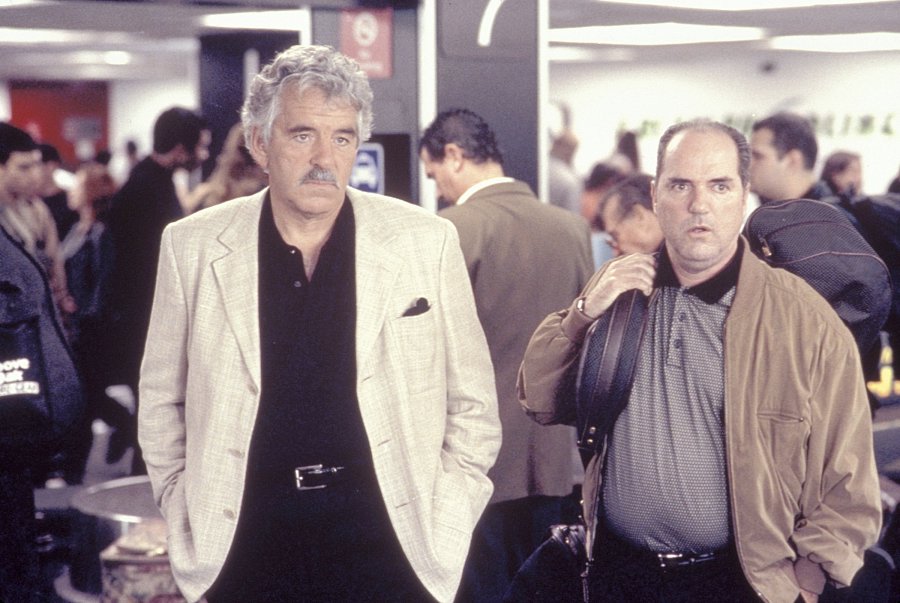 Despite the impressive cast, the film only illicits mild smiles, rather than anything resembling laughter.  Tim Allen seems to be the wrong sort of person to take the lead here, as well as the wrong fit as a love interest for Rene Russo, who also appeared in a lead role in Get Shorty.  Hand it to Barry Sonnenfeld, who not only was able to attract amazing talent to his projects, but who also used these cast members over and over in multiple projects.  The end result is not necessarily bad, but it isn’t good either.  This feels like a film that is barely able to hold its head above water, but that doesn’t drown itself either.  Credit that to the cast which each bring enough charisma to their respective roles to make it just interesting enough.

This blu-ray from Kino Lorber has a couple of features.  The biggest one is the audio commentary track by director Barry Sonnenfeld.  While he is not very charismatic, he does let you in on many of the reoccurring gags that are placed throughout the film.  He explains how his notion of comedy is putting people in real situations, and using sight gags, while the actors react as if the gags are normal.  One example is when Snake and Eddie are robbing the bar where Puggy is working for two Russian arms dealers who are selling a bomb to Arthur.  As the two bumbling thieves wear pantyhose on their face as a mask, they keep demanding Arthur to throw things at them, like his keys, or wallet.  Each time, the tossed object strikes Eddie’s face and then lands on the bomb’s case.  Eddie, while annoyed at being hit in the face, due to his not being able to see well out of his makeshift mask, simply grabs the item off the case and carries on, each time, the same way. 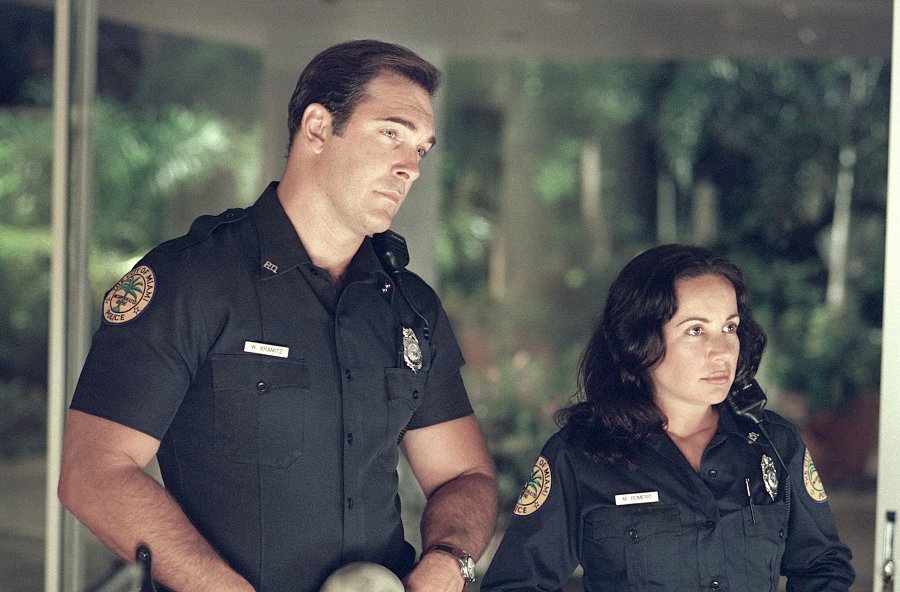 Even Martha Stewart is a running gag, as people are seen reading her magazine, watching her show, or even hallucinating her face when under the influence of a powerful hallucinogen.  Sonnenfeld, along with screenwriter David Koepp (Spider-Man, War of the Worlds), gets in on the act, voicing a running gag of two people talking on the radio about the Florida Gators college sports team every time Henry and Leonard are in the car listening to the radio.  The car itself even has a gag with the old annoying automatic seat belts, to which Dennis Farina perfectly reacts, each time.

The Blu-ray of Big Trouble also features a theatrical trailer for the film, as well as a few other Kino Lorber titles.  The sound is provided in 2.0 and 5.1 surround and presented in 1920x1080P, with English subtitles available. 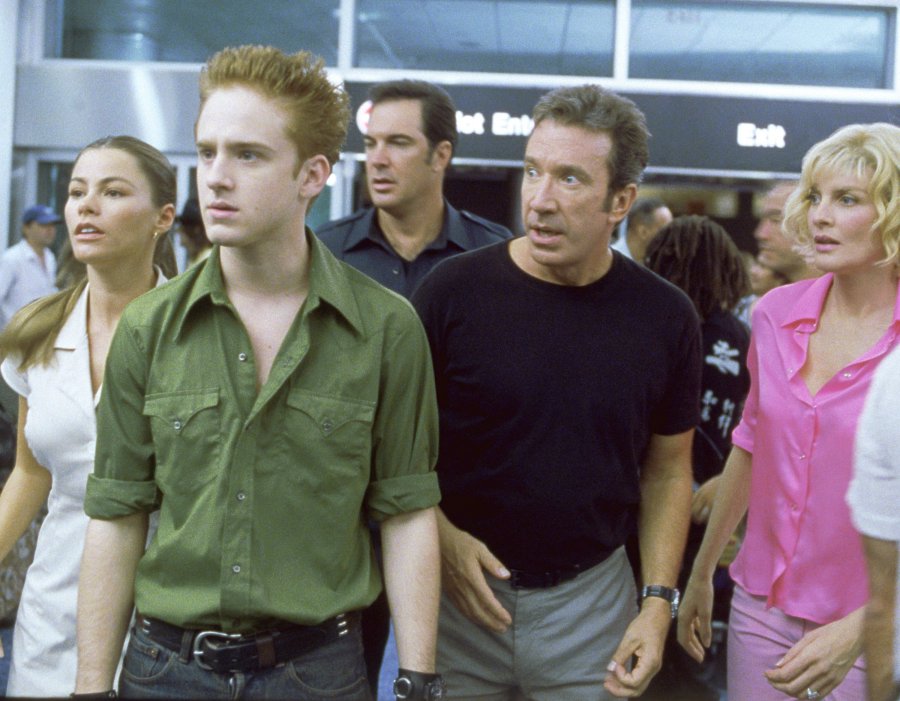