After five months of recommending my own podcast feed, the time has come to hand the reins over to my fellow writers/podcast junkies at ZekeFilm. While I also think it makes for a better column, I’m selfishly looking forward to refreshing my own feed after reading their recommendations.

Our resident TV critic Madeline Brophy throws a show with a TV bent into our mix, and one of our most frequent contributors, Jeffrey Knight, tips us off to where he pulls some of his film criticism inspiration. Plus, Jim Tudor indulges in his love of the Criterion Collection, a collection you might love, too. Like always, they’re giving refreshing takes on podcasts in these categories: 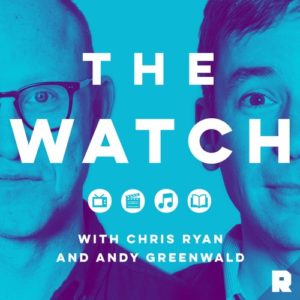 Behind the Scenes: The Watch

Summer is a time for television binging—at least if you are anything like me. I especially look forward to new summer shows, but has this summer been a slow season for TV? Maybe. The bigger bummer is that lately I’ve had a hard time finding people to gossip with about the newest shows (except for Bachelor In Paradise—way too many people watch that show, myself included!).

When I get down and wonder if there’s any hope to connect with the television nerds of America, I turn to The Watch podcast for my needy pop-culture fix. On one of their most recent episodes, co-host Chris Ryan was joined by television critic Alison Herman and The Ringer Editor-In-Chief Sean Fennessey to talk all things happening in summer TV world. This was right up my alley as I was pretty lonely talking to my cat about the most recent seasons of GLOW (Netflix), Barry (HBO), Castle Rock (Hulu), and Sharp Objects (HBO). This single podcast episode covered all of these shows, even encouraging me to give Succession (HBO) a chance. (Man, is that a weird, frustrating, and fascinating show.) So if you’re looking for a good round table-style television discussion, check out The Watch. Typically they stay pretty spoiler-free (i.e. no one ruined Succession for me), but do pay attention for any warnings to skip ahead!

Don’t watch much television? Never fear! The Watch also covers a wide range of albums, artists, authors, awards, new films, and hot-topic issues in the entertainment industry, including diving head first into the television business itself. The variety in the episodes also helps keep listeners’ interest. Sometimes it’s just the co-hosts talking, sometimes there are extra guests like the artists or filmmakers, etc.. Ultimately, The Watch has all the latest intel on the entertainment world. Some of my recommended episodes to start with are below. Happy listening!

Listen in to The Watch. 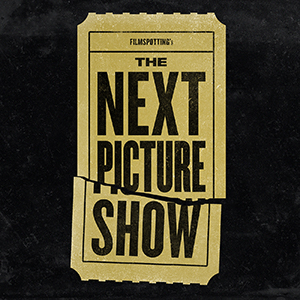 Arts & Criticism: The Next Picture Show

“We here at The Next Picture Show believe that no film exists in a vacuum and that all art is more interesting in context.” Thus begins every episode of one of my favorite podcasts. The Next Picture Show is a biweekly roundtable of film critics who examine a current release by way of comparing and contrasting it with an older classic. The episodes are released in two parts, one per week. The first part examines the older film, while the second looks at how that older film informs and inspires the new one.

The hosts of The Next Picture Show are the former editors of the now-defunct site The Dissolve: Genevieve Koski, Keith Phipps, Tasha Robinson, and Scott Tobias. Together they represent a fairly wide range of viewpoints on each film. It’s not uncommon to have at least one strongly dissenting opinion on a movie every episode, and someone is always offering a unique observation or comment, especially when talking about classics that one of them may be watching for the very first time (not unlike ZekeFilm’s own Film Admissions column).

The pairings are sometimes obvious. Recently they looked at Jaws with The Meg, as well as Brian DePalma’s Mission: Impossible with Mission: Impossible – Fallout. Sometimes the films are linked only through a tenuous spiritual connection, such as when they paired Paths of Glory with Wonder Woman. But in every case, when the discussion turns from the individual films to the connections they share (whether or not the new film reflects positively in the classic), it opens up new angles to look at them both. The Next Picture Show casts light on how even the most soulless cash grab produced today takes inspiration from the art of yesteryear.

Don’t miss their next podcast show. 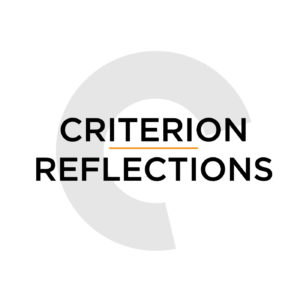 While there’s no shortage of podcasts devoted to the Criterion Collection, precious few actually focus as intently on the movies themselves as David Blakeslee’s well-produced Criterion Reflections. Began as a blog project several years ago, Blakeslee set out to contextualize every single film Criterion has ever released, regardless of format, chronologically by year. The effort morphed into a regular podcast a year or so ago, in which Blakeslee is joined by a rotating stable of co-hosts, serving up thoughtful but conversational, full discussions of whatever film is the subject of the episode. Not officially affiliated with Criterion, Blakeslee is wisely utilizing his own collecting hobby (one shared by this writer), film by film, to unpack its significance within its own vital aspects. From classic Hollywood to the fringes of global experimental cinema, everything is on the table and granted equal consideration and focus. The range is vast; the equality is beyond refreshing.

For all that, it can’t be overstated that the primary draw to Criterion Reflections is David Blakeslee himself.  In reference to his soothing, deep voice, the term “dulcet tones” comes to mind. Though an informed cinephile through and through, Blakeslee is unafraid to have fun, sometimes opening by singing an apropos parody song, and always reliable for year-appropriate, cleverly topical, musical needle drops. Ever humane, honest, and open-minded, Blakeslee strikes one as the rare film fan that one could effortlessly hang out with, chatting up life, the world, and the God-given gift of cinema arts. With Criterion Reflections, we can do just that.

At the time of this submission, Criterion Reflections has been chronicling the qualifying films of 1970.  Here are a few from around the world:

Find the full collection of podcasts on the website. Read David Blakeslee’s blog about the Criterion Collection.

What else should we refresh our feed with?

Taylor Blake is a contributor for ZekeFilm, including to episodes of ZekeTalk. She co-hosts her own podcast, SO IT’S A SHOW?, which focuses on Gilmore Girls pop culture references.