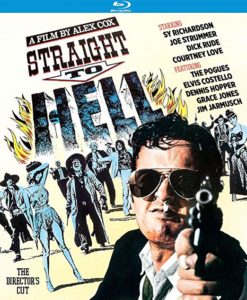 On his commentary for Sergio Leone’s landmark spaghetti Western, A Fistful of Dollars, Sir Christopher Frayling insights that it is a “very rock n’ roll film”.  Rock n’ roll itself was new enough when Fistful was made that such a connection is truer in hindsight than it was in intentionality.  But global zeitgeists being what they were circa 1964, it’s a near-perfect observation nonetheless.  Across counties, cultures, languages, and even oceans, the same brewing unrest that ushered in The Rolling Stones and whatever other surly, unkempt, Devil-may-care rock and/or roll acts was itching the cinema-addled mind of Leone and company.  The world was on the cusp of going straight to Hell.  Our primal art was bracing us for it.  But, you know, in fun ways.

Which might as well bring us straight to Straight to Hell.  “Hell”, of course, is entirely figurative in this sense.  While the filthy, marauder-infested small town that our inept group of three thieves (Sy Richardson, sporting Tarantino crime chic before Tarantino did it; The Clash’s Joe Strummer; and the film’s co-writer Dick Rude) and the pregnant wife of one of them (Courtney Love) stumble into isn’t exactly Beverly Hills, it’s also not the eternal place of suffering and damnation ruled by Satan himself.  But, give these idiots time; they might just make their way there, as well.

The setting is perfect for this rambunctious party of death and chaos.  There may not be much to this town, but once these warring factions of coffee-addled nut-jobs settle in, it’ll be just the final stop they deserve.

The town, as Strummer puts it in a bonus feature that was produced in 2000 by Straight to Hell’s director Alex Cox (Repo Man, Sid & Nancy), is a classic pile of bricks in the desert.  Built in Spain for a Charles Bronson movie in the 1970s, the leftover set is pure, stark, spaghetti Western vintage.  (Want a tour?  Watch the Blu-ray featurette, “Black Hills”, shot back in 1977 when Cox was traveling the world to document abandoned spaghetti Western facade towns). The setting is perfect for this rambunctious party of death and chaos.  There may not be much to this town, but once these warring factions of coffee-addled nut-jobs settle in, it’ll be just the final stop they deserve. 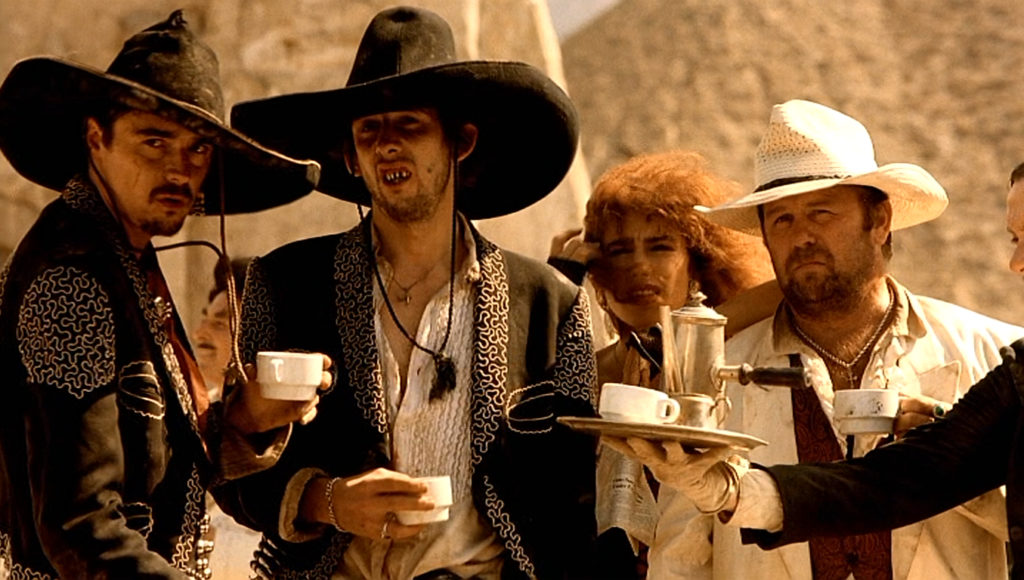 Indeed, though the very existence of Straight to Hell eluded this critic until this Blu-ray came along, the film is said to have a reputation for having been one big punk-laden bacchanal.  In reality, far more than coffee was being consumed, and the sexual tension that is blatantly referred to as the source of everyone’s aggression couldn’t have been a problem in real life.

The fact that the cast is more populated with rock stars than actual actors only makes sense when one learns that Cox and his production cohorts original gathered these acts to do a fund-raising tour for the Sandinistas.  Then, that fell through.  With everyone available schedule-wise, it was apparently decided that it would be easier to not do that, and do this instead.  Hence, members of The Pogues, Amazulu, and The Circle Jerks, as well as the likes of Elvis Costello, Jim Jarmusch (not known for being a rock musician, but close enough) and Grace Jones make up much of the cast.  Then, Dennis Hopper shows up.  Dennis Hopper belongs in this movie.

Cox, another respected Brit with filmmaking skill and a penchant for recording audio commentary for Leone films, understands this ridiculously well.  A film scholar in his own right, Cox clearly blew off significant steam immediately following the production and release of his acclaimed, uneasy Sex Pistols bio Sid & Nancy by turning around and creating the fevered and purely whackadoodle Straight to Hell.  A darkly comedic spaghetti Western riff, cops neither familiar style nor attitude, yet lands as just the right spaghetti Western thing.  It’s a whole lot of crazy, but then, by this time (1987), rock n’ roll was old enough to be wholly both aware and seen at ridiculous. 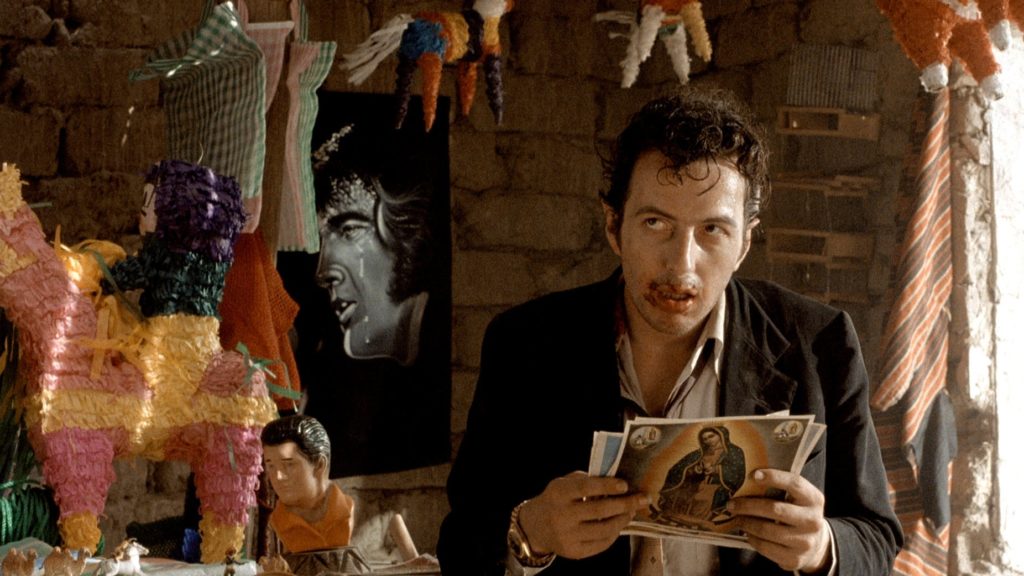 Joe Strummer in STRTAIGHT TO HELL.

It’s safe to say that as part of the long and exhausting string of other hotheaded directors offering their own spaghetti Western homages, style-grabs, and cardboard cut-outs, Cox’s film remains a gold standard.  Both Cox and, say, Robert Rodriguez (Once Upon a Time in Mexico), go for badass character overload and violence, violence, violence (check out those exploding pink gunshot wounds!); but only Cox understands that if each bullet fired is going to chalk-down the perceived value of human life on screen, the attitude of his “spoof” must forsake the very “cool” that its filmmaking niche was built upon.  (Also, Cox’s film contains a curious lack of swearing- placing it a long way from Deadwood).  Rodriguez (to continue picking on the most visible and well-known of the prime offenders, of which there are many), with his faux spaghetti Western shoot-‘em-ups wants to be a cool and edgy director, but also doesn’t want the true responsibility of carrying on the torch of the sub-genre.  Therefore, for lack of any other aspect of Once Upon a Time in Mexico that could be decidedly pinpointed, audiences collectively decided it’s a “knowing satire”.  No. Straight to Hell is the knowing satire. All others might as well have avoided their respective doom towns, and chosen the initial dusty road not taken. 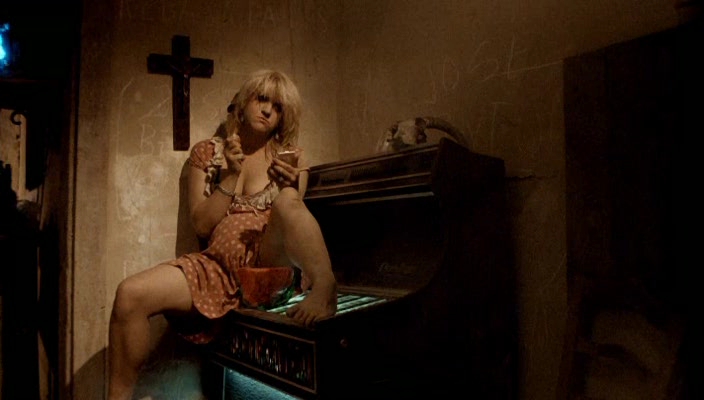 Courtney Love in STRAIGHT TO HELL.

How did Alex Cox do it?  Backing up, what exactly did Alex Cox do??  Considering the apparent loose history of this film- something that Kino’s new Blu-ray blissfully avoids- it’s hard to comprehensively know.  Cox and Dick Rude provide a new commentary track, both full of vaguely bemused tales, oblique admissions, and half-remembered fun.  Like the film it’s in service of, it’s a satisfying commentary on its own terms.  They refer often to a less comprehensible original cut, signifying that this version of the film is a later director’s cut.  Per the movie’s own outer mythology, there was a 2010 recut that was confusingly known as Straight to Hell Returns.  Apparently that’s what we’ve got here.  Any, it’s looking and sounding pretty dad-gummed good.

Various sources report that Alex Cox turned down directing RoboCop, The Running Man, and The Three Amigos to do this.  Huh.  History is what is, and in case, perhaps we’re all victors.  Though Straight to Hell was less than well received at the time, we should be glad to have it.  In a realm of hard liquor and loners, this is a strong cup of coffee for a communal raiders.  Don’t expect total coherence or tour-de-force acting, but for fans of rock n’ roll pop culture, Straight to Hell is a curio that’s hard to beat.