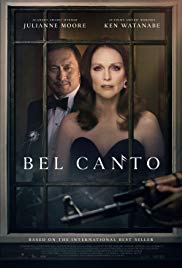 Bel Canto is Italian for beautiful singing, or beautiful song.  In opera it is a lyrical style that uses a full rich tone and smooth phrasing.  It is this title that guides Ann Patchett’s novel, that has now been adapted for the screen by director Paul Weitz (About a Boy, Being Flynn) who wrote the screenplay with Anthony Weintraub.  The novel was based on the Japanese embassy hostage crisis that took place in 1996-1997 in Lima, Peru, but for this story the setting is an anonymous South American country whose internal politics will spill over into the lives of an opera star, as well as some political and business dignitaries from around the world.

Ken Watanabe (The Last Samurai, Inception, Isle of Dogs) plays Katsumi Hosokawa, a wealthy Japanese businessman who is flying to our unnamed South American country under the guise of looking for a place to build a factory.  As a way to sway his decision, the President and Vice-President of the country have invited him to join them at a private gathering where the night’s entertainment will be Hosokawa’s favorite opera singer, Roxanne Coss (Julianne Moore-Still Alice, Kingsman: The Golden Circle).  Hosokawa has no intention of building this factory in this country, but the chance to hear Coss sing, and to finally meet her, is an offer he cannot pass up. Joining Hosokawa is his faithful translator, and language teacher, Gen (Ryo Kase-Silence, Our Little Sister, Letters From Iwo Jima).

The party begins with all of the pleasantries one would expect and is populated by some of the highest dignitaries in the world.  The French Ambassador, Simon Thibault (Christopher Lambert-Highlander, Hail Caesar!, The Hunted), the Russian Ambassador, Fyodorov (Olek Krupa), and others have all been enjoying themselves at the house of Vice-President Ruben Ochoa’s (Eddie Martinez) house when Roxanne Coss makes her grand entrance.  Shortly after beginning to sing, the party takes a turn when armed rebel militia break in to take the President hostage in exchange for the release of their comrades-in-arms.  The only problem is that the President had not attended this gathering, and so this gathering of dignitaries becomes their negotiating tool in a standoff that will last over a month.

While this film could have easily become Die Hard: When the Fat Lady Sings (opera humor), the story is a much more human one.  At first it is set up like any hostage film where the main leader of the hostage takers, Comandante Benjamin (Tenoch Huerta-The 33, Get the Gringo), is seen as the ruthless bad guy, who we are supposed to hate due to him releasing all of the women, elderly, priests, and those who are hurt, but forcing Roxanne to stay, along with the other men.  As it goes with Roxanne, so it goes with the audience.  If she is forced to stay, then we are seeing these guys as bad. 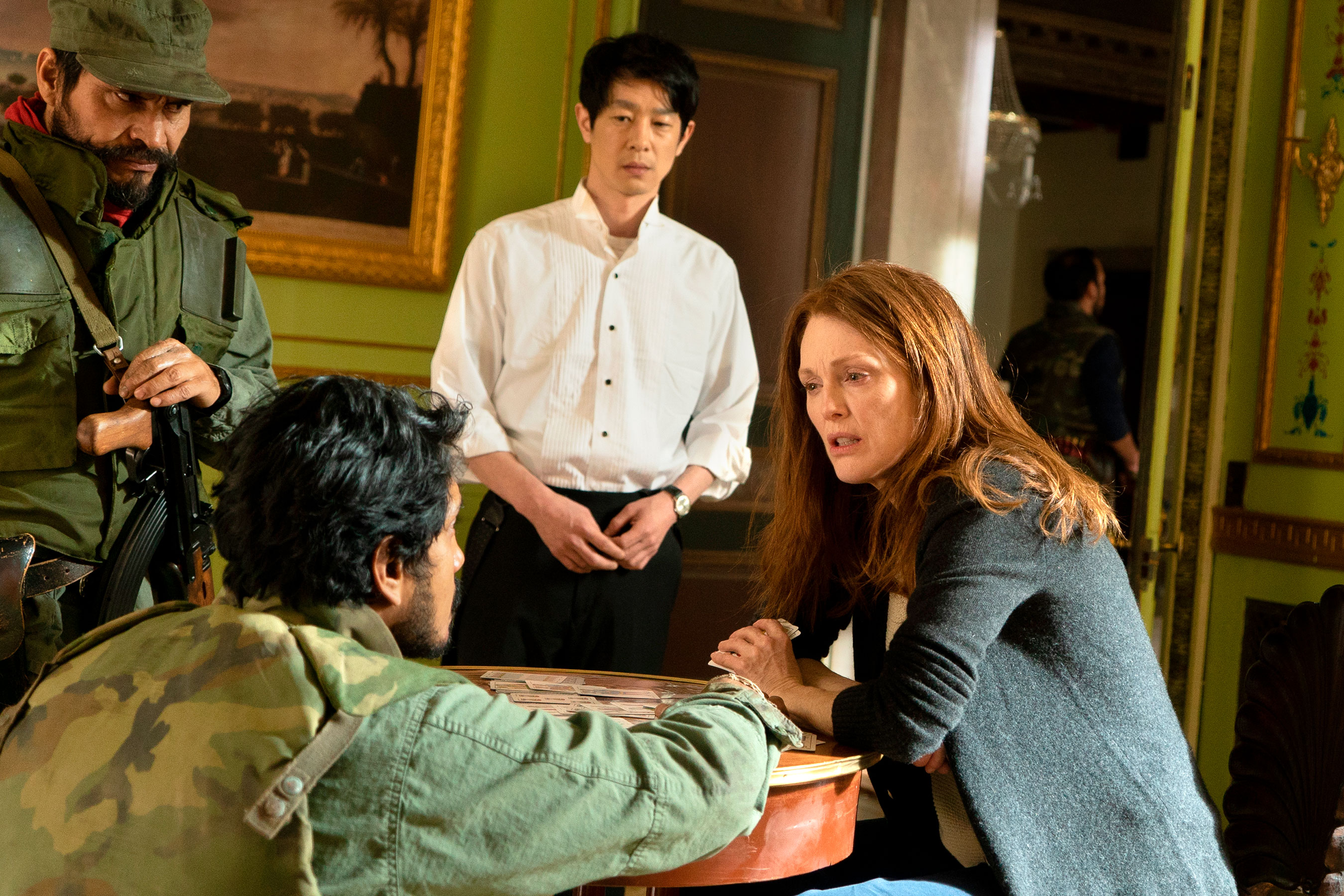 Bel Canto instead transitions away from the story being about a stereotypical hostage situation into a beautiful story of how both captives and captors have to learn to live together for this month.  Through this period, we see more than Stockholm Syndrome at play.  The individuals involved certainly head towards this arrangement slightly, especially as the main negotiator, Messner (Sebastian Koch), comes and goes, but soon it moves beyond that.  Two romantic relationships begin to blossom in the midst of the chaos, and while no one is happy about their captivity, they do begin to understand the deeper personal reasons for the hostage takers’ political moves.  This allows both sides to see each other as humans and the film really captures this in a way I haven’t really seen in other such films.  To give examples might ruin the experience, so I’ll refrain, but suffice it to say, this is where the heartbeat of the film is and is why the film is able to rise above its flaws.

As beautiful as this is, the film itself doesn’t really set itself apart in any way.  The cast is fantastic, and Julianne Moore and Ken Watanabe elevate the whole affair.  The political motivations are developed just enough to keep things moving, but not enough to create the amount of tension that they could if done properly.  Without this tension, it creates a more of a sauntering middle section that only leads to a satisfying final act due to the strength of the personal connections between the individuals in this house that I mentioned earlier. 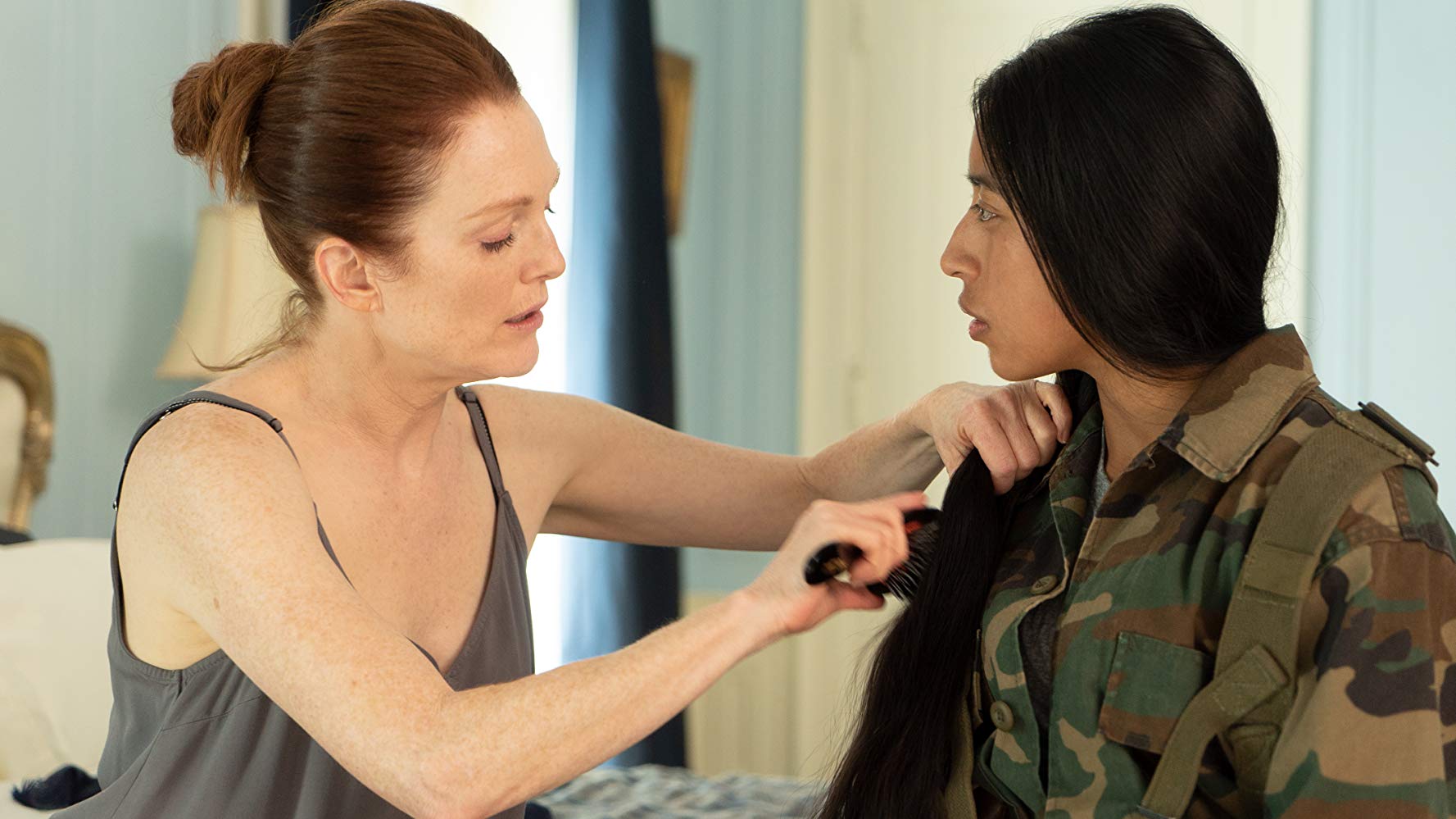 Since opera is at the heart of the story, including in the book, the subsequently developed (actual) opera, and now the film of Bel Canto, don’t be surprised that the story ends much like most operas do.  Julianne Moore, as Roxanne, telegraphs this at the very beginning of the film with a throwaway line, but due to the strength of the characters this ending will still affect the audience.  If you are wondering who is singing the deeply moving opera songs that Julianne Moore is seen to be singing, it is the world renown opera singer Renee Fleming.

Bel Canto may not hit the high notes at the box office, but it is a film that is strong enough to carry its own tune, and worth finding.  It will open today at the Alamo Drafthouse in Houston and other Alamo Drafthouse Theaters around the country, as well as other specialty theaters. 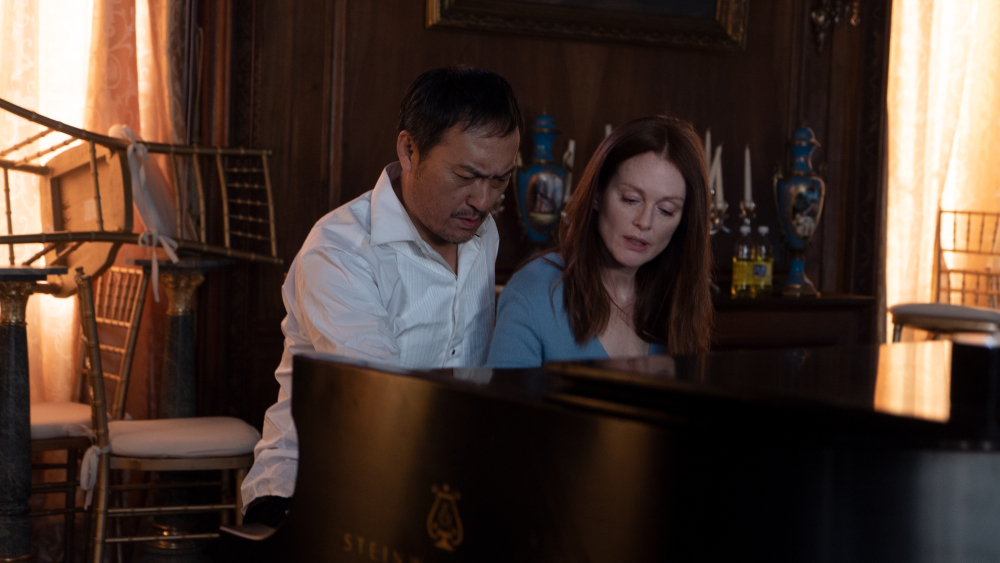