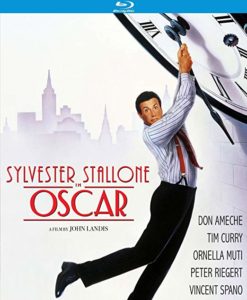 No, really- this movie Oscar is a funny thing!

Based upon the successful French play by Claude Magnier which, in turn, was made into a 1967 French film by Édouard Molinaro, Oscar manages its housebound nature with fine cinematic finesse.  Not that the achievement was at all recognized at the time of its release.  Sometimes, the world just wants to sock a good movie in the face.

In 1991, both director John Landis (The Blues Brothers, An American Werewolf in London) and superstar Sylvester Stallone (Rocky, Rambo) were personae non gratae.  Landis for having had the final say on a helicopter stunt having gone horrifically wrong a decade earlier on the set of The Twilight Zone: The Movie; Stallone for being too famous.

[Stallone] more than goes the distance as the lead in Landis’s prohibition gangster comedy.

While the collective beef with Landis remains far more legit, Stallone had worked himself into a major industry power position while failing to shed the monosyllabic perceptions associated with his most famous characters.  By the time the perfectly accomplished Oscar rolled around, everything the actor did was instantly deemed unintentional Razzie Award bait.  It’s a horsecrap bias that immediately led to the film’s status a thing of mockery.  “Har har, Sly thinks he’s a comedian now!”  Fact of the matter, he more than goes the distance as the lead in Landis’s prohibition gangster comedy. 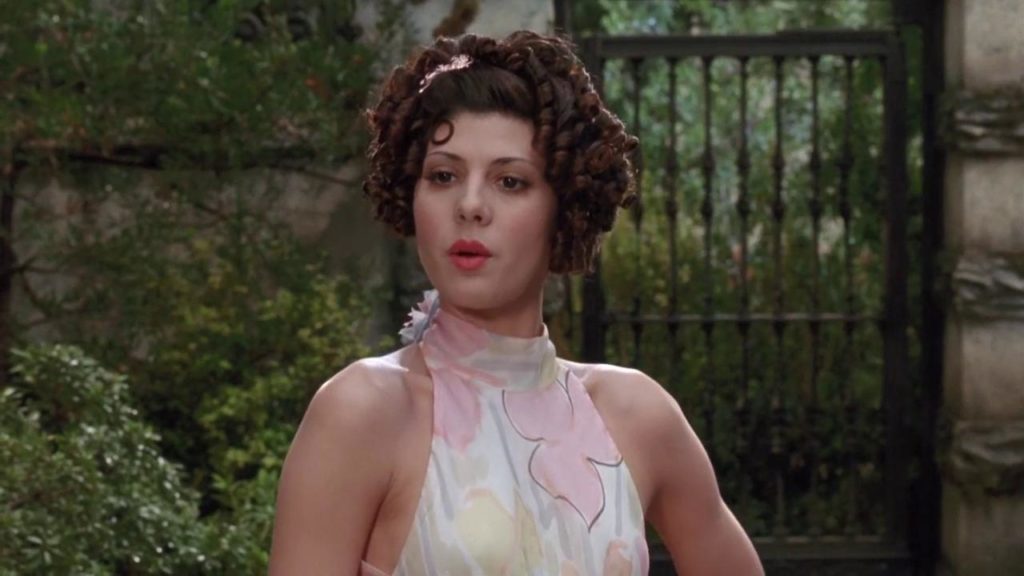 Stallone plays Angelo “Snaps” Provolone, a very wealthy gangster boss who suddenly must go straight, per the dying wish of father (Kirk Douglas, in a hilarious opening scene cameo).  In a movie full of wildly varying humor, spanning from slapstick to mistaken identity to the old bag switcharoo to clownish sight gags to dry to meta comedy, Provolone’s name is the most unfunny thing about it.  Don’t take the evocation of cheese in the main character’s name as an indicator of lazy, stupid humor throughout.

Of course, there’s also the matter of the film’s one-sheet, with Sly, dressed to the nines and hanging from a clock ala Harold Lloyd in Safety Last.  The image has become directly associated with Oscar, despite the fact that “Snaps” barely leaves the mansion, much less hangs off of anything for dear life.  Not while he’s scrabbling so relentlessly to hang onto his newly proclaimed dignity as a respectable citizen, and his grown daughter (Marisa Tomei- My Cousin Vinny) who’s so hot to marry her beau (some guy we never see, named Oscar) that she lies to dear old Dad about being pregnant.

Oscar, though, presents its array of shady goomba protagonists as having the best of excuses for their lawbreaking ways: they could use a stiff drink.  They’ve made their fortune in illegal booze, but now things are changing alarmingly quickly in the Provolone compound, and not just because of the boss patriarch’s “snap” decision to give up crime.  There’s diction to be quickly mastered, legitimate bankers to impress, trigger-happy goons to be reprogrammed, and a pack of cops stationed across the street who don’t buy any of this “going straight” stuff, and are patiently waiting for just right moment for take in the whole sorry lot of ‘em.  And that’s to say nothing of Snaps’ familial troubles, missing jewels, and the revelation that the account who’s been ripping him off for years now wants to marry his daughter.  Except, the girl he wants to marry is a complete stranger to Snaps, who’s real daughter is also scheming to get hitched.  Confused?  Welcome to the gang. 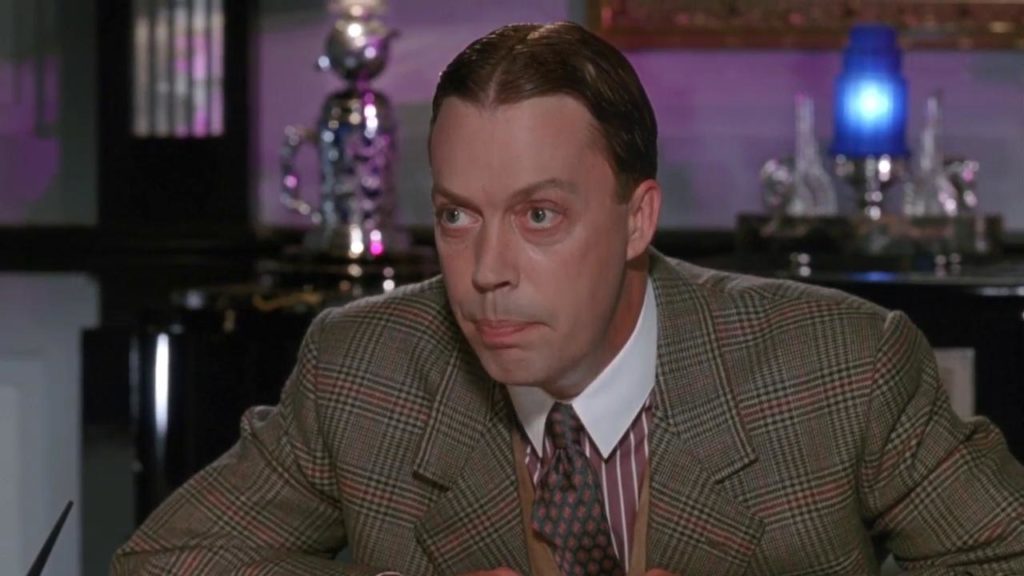 Tim Curry as the lovable linguist in OSCAR.

The comings and goings of the many zany characters are the fuel that keeps Oscar abuzz, memorable standouts being Chazz Palminteri (The Usual Suspects) as Snaps’ lunkheaded bodyguard, Ornella Muti (Flash Gordon) as Snaps’ exasperated wife, Tim Curry (Clue) as a bighearted linguist.  Peter Riegert (Animal House), Vincent Spano (The Tie That Binds), Kurtwood Smith (RoboCop), Yvonne De Carlo (Criss Cross), Don Ameche (Cocoon) also have memorable parts of varying degrees.  And don’t overlook Harry Shearer (This is Spinal Tap) and Martin Ferrero (Jurassic Park) as a pair of dim-witted straight men who struggle to figure out a pocket door.  There are no rotten performances here, just a blend of screwball zip and zing that manages to evoke John Renoir staging while allowing Landis to continue his streak of unhinged comedy (with Three Amigos!, Amazon Women on the Moon, and Coming to America all directly preceding this), in PG-rated fashion.

For this all-new Blu-ray edition of Oscar, John Landis sat for an on-camera interview, proving himself to still be quite the raconteur.  In his colorful recalling of select details about the casting and making of the film, Landis lands at least two highly entertaining tales: one, about how Kirk Douglas took the role just so he could punch Stallone; and the other about how a fire on the backlot destroyed his sets and vintage costumes in mid-production.  Ah, precious memories.

Reputations and past histories being what they are, Oscar nevertheless glides along, landing unexpected gags in machine gun fashion, be they hambone, dry, groan-inducing, or, well, cheesy.  And in this movie, even the cheese can be a funny thing. 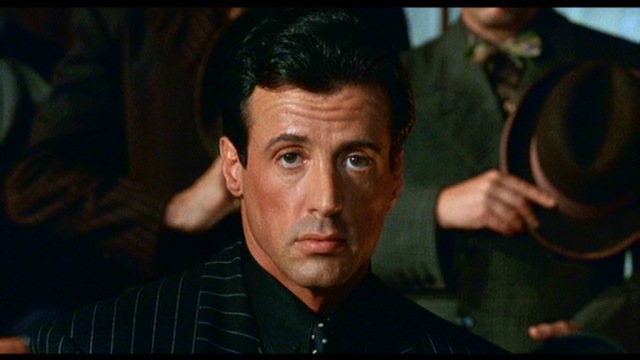