A Vintage 3D Film Well Worth Getting Lost in. 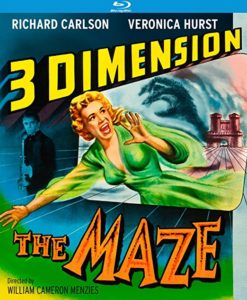 Though the notion of vintage 3D movies is a fun one, the reality of sitting through most of them is a blurry reality check.  Mostly due to the technically imposed creative restrictions of the then-new stereoscopic filming process, the process never transcended beyond the the level of pure gimmick.  Even the immortalized 3D entries of the era, such as Jack Arnold’s The Creature From the Black Lagoon and Alfred Hitchcock’s Dial M for Murder, are remembered for reasons other than having been made stereoscopically.  Being of fluctuating popularity and difficult to replicate on other formats, 3D is an attribute pretty far down the list of what makes those films great; almost a footnote.

That said, a creature’s claw or a pair of stabbing scissors comin’ at ya provide an undeniable visceral jump.  And, the movie business is nothing if not full of hucksters looking to exploit such thrills.  Even well-intended filmmakers, truly seeking to explore the creative possibilities of tacky ol’ 3D, opened themselves up to be lured in for a project or two.  The resulting filmography of what we’ll call “3D, Phase I”, yielded a small if diverse array of movies, ranging from the aforementioned classics to the serious-minded Korean War experiment Cease Fire!, to forgotten nonsense such as September Storm and Those Redheads from Seattle.  Somewhere in between is The Maze. 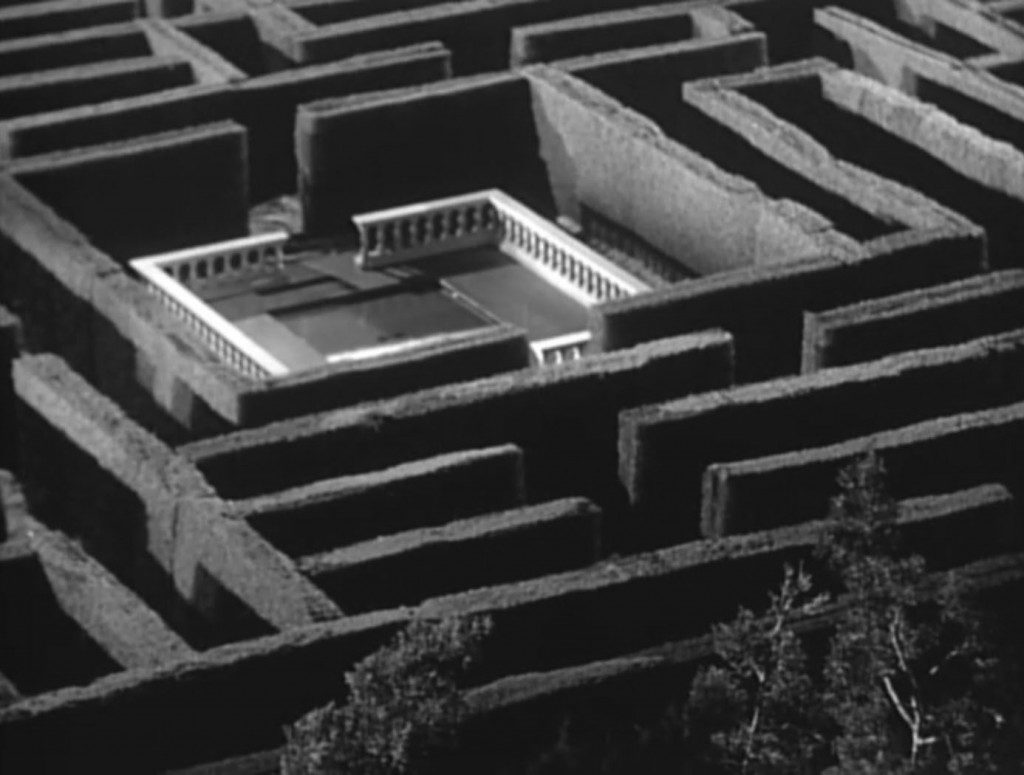 Produced by Walter Mirisch  (In the Heat of the Night) and directed by the great production designer William Cameron Menzies (Gone with the Wind), The Maze proved to be the rare 3D curiosity that actually left audiences with more than just a headache.  Menzies had directed several respectable films prior to this one (Things to Come, Invaders from Mars, Chandu the Magician) which, in fact, turned out to be his last.  The Maze measures up moderately well as a directorial effort; far less so as a production design effort.  Menzies does well with his actors, and the old castle that confines most of the story is consistently creepy, if not always convincingly aged.  (Word is that despite his opening credit of “Directed and Production Designed by”, Menzies not only did not truly do the latter job, but was supposedly drinking through production).  But, be not deterred; compared to the standards of its 3D cohorts, The Maze is a triumph.

Based on the longstanding legend of the “terrifying thing” hidden away in Scotland’s Glamis Castle, The Maze stars sci-fi/fantasy leading man Richard Carlson (The Creature from the Black Lagoon, among many others) as Gerald, a kindly Scottish nobleman who’s quite in love with his fiancée, Kitty, played by Veronica Hurst.  After Gerald abruptly cuts off the engagement via letter following a sudden move back to the far-off and foggy family castle, Kitty and her aunt Edith (Katherine Emery) decide to go visit him, against his wishes. 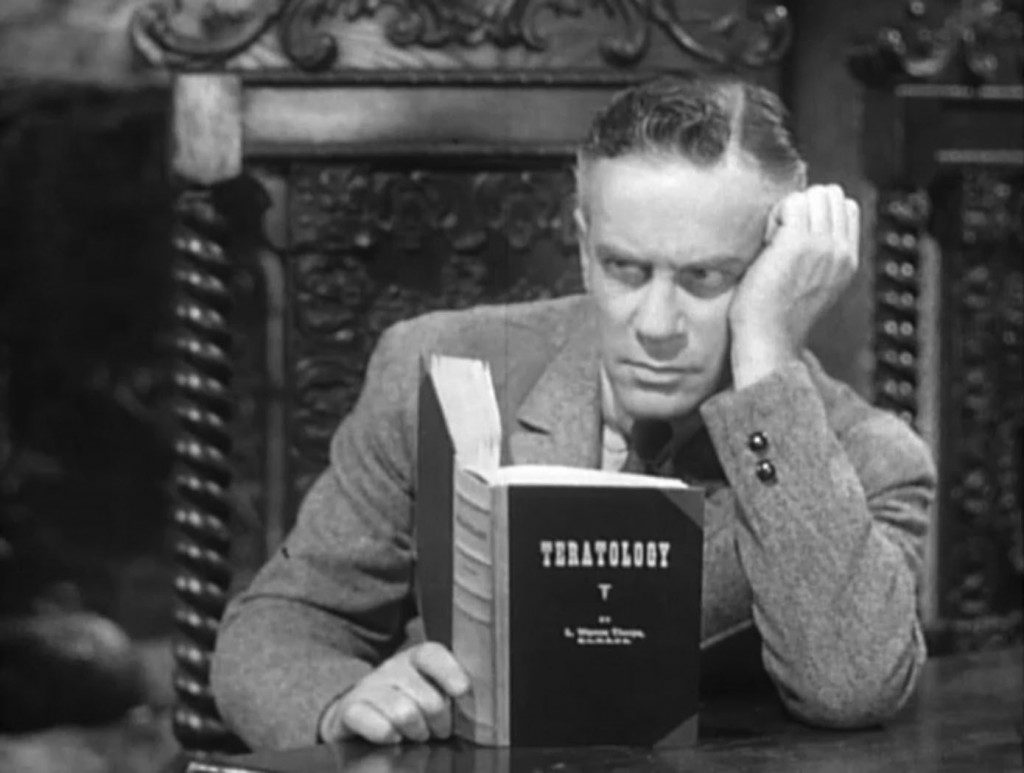 Richard Carlson, unaproving in THE MAZE.

The castle turns out to be a real haunt, all right.  The candlelit and supposed stone walls of the castle house many spider webs, creaky doors, long hallways, and even bats- all of which conveniently lend themselves to stereoscopic photography.  Also, there’s a very large garden maze outside.  Each night, the tight-lipped residents of the castle escort some sort of unknown creature out of the building and through it.  So you see, it is imperative that guests mustn’t enter the maze.  In fact, it’s best if they remain locked in their bedrooms at night…  Ominous, no? 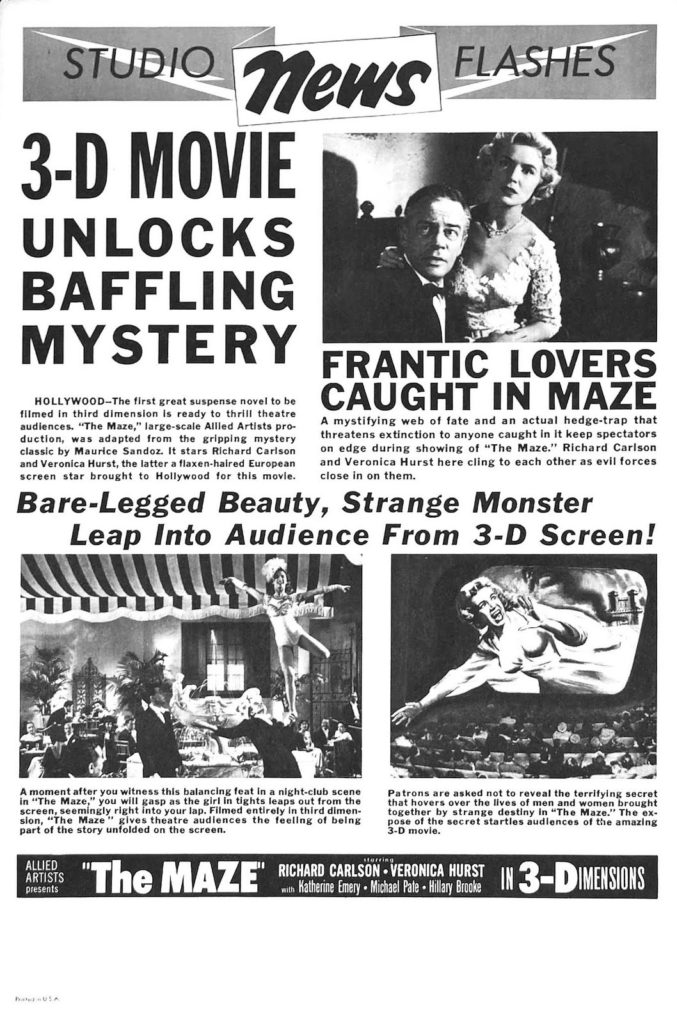 Characters tend to converse and chat and explain and recall things an awful lot throughout the film, resulting in a surprisingly talky affair.  Everything is as proper and restrained as a Miss Manners dinner party, resulting in a Merchant-Ivory scented black and white 3D programmer- an odd concoction to sure; just please don’t refer to it as such to its face- that would be most impolite.

The stakes remain completely unknown for the duration; that is, until the final moments when the secret of the castle is revealed.  For all of the rest of the film, it is the consequence of discovery that looms over the visitors to the castle- that is, the characters and us, the viewers.  The Maze is, after all, a 3D film- one in which the wait for something to leap out of the screen is almost feature length.

That said, even in 2D, which is how this critic had to experience The Maze, the wait for the reveal is no less long.  Even compressed and “flat”, though, the movie is perfectly okay as a mannered, gothic potboiler.  It’s not something that anyone would ever get lost in, but it’s plenty immersive with or without silly cardboard glasses.  The Maze is not a long movie, and stands as a worthwhile endeavor for fans of 1950s genre movies and 3D oddities.

Restored and presented by Kino Lorber Studio Classics as part of their ongoing partnership with the 3D Film Archive, The Maze on Blu-ray is a terrific little package.  The main bonus feature is the most fun audio commentary in quite a while, helmed by the expert film historian Tom Weaver, and featuring guest segments by Bob Furmanek, Dr. Robert J. Kiss and David Schecter, each focusing on the film from their own field of specialty.

There’s also a short, new video interview with star Veronica Hurst, as she pleasantly recalls how nice everyone was, and how they and their wives took her out to dinner.  Quite interestingly, there’s a three-channel stereophonic audio track, itself a meticulously reconstructed version of the lost original pioneering three-channel track, engineered by Eckhard Büttner.  Finally, there’s the 3D trailer, and reversible art.  All of it well worth getting lost in.

NOTE: Following a correspondence with the 3D Film Archive’s Bob Furmanek, this review was slightly revised on June 14, 2018.  Thanks to Mr. Furmanek.