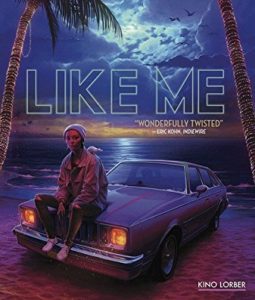 Robert Mockler is a brand new name in film making, and judging from Like Me he’s got talent, vision, and confidence to spare.  I’m just now sure how I feel about the end product of his first feature effort.  Like Me is a bold visual splendor, and well acted; and yet, it still felt like an endurance trial even at just 80 minutes.

Like Me focuses on Kiya (Addison Timlin, Little Sister), a strange loner who lives by a simple metric – the views on the videos she uploads.  The movie opens with her menacing a burly convenience store clerk (Jeremy Gardner).  When the slight masked figure first starts recording him on her phone he is merely annoyed, and even plays to the camera as he rightly figures he’s the subject of a video that will soon be shared online.  Kiya isn’t satisfied, though, until she’s pulled out a gun and frightened the clerk into wetting himself.  That is the shot she needed to raise her video about the masses.   When she wakes up the next morning (after a night of drug use, binge eating, and yoga) she finds her numbers soaring and video responses pouring in.  She doesn’t seem to differentiate between those who consider her sick and those who view her as brilliant – it’s all attention.  One response, from a young man named Burt (Ian Nelson) does get under her skin, though.  Burt offers nothing but contempt and hatred in his response to Kiya, and ends with the suggestion that she do the world a favor by slitting her wrists.  Kiya seems to take this as challenge to up her game. 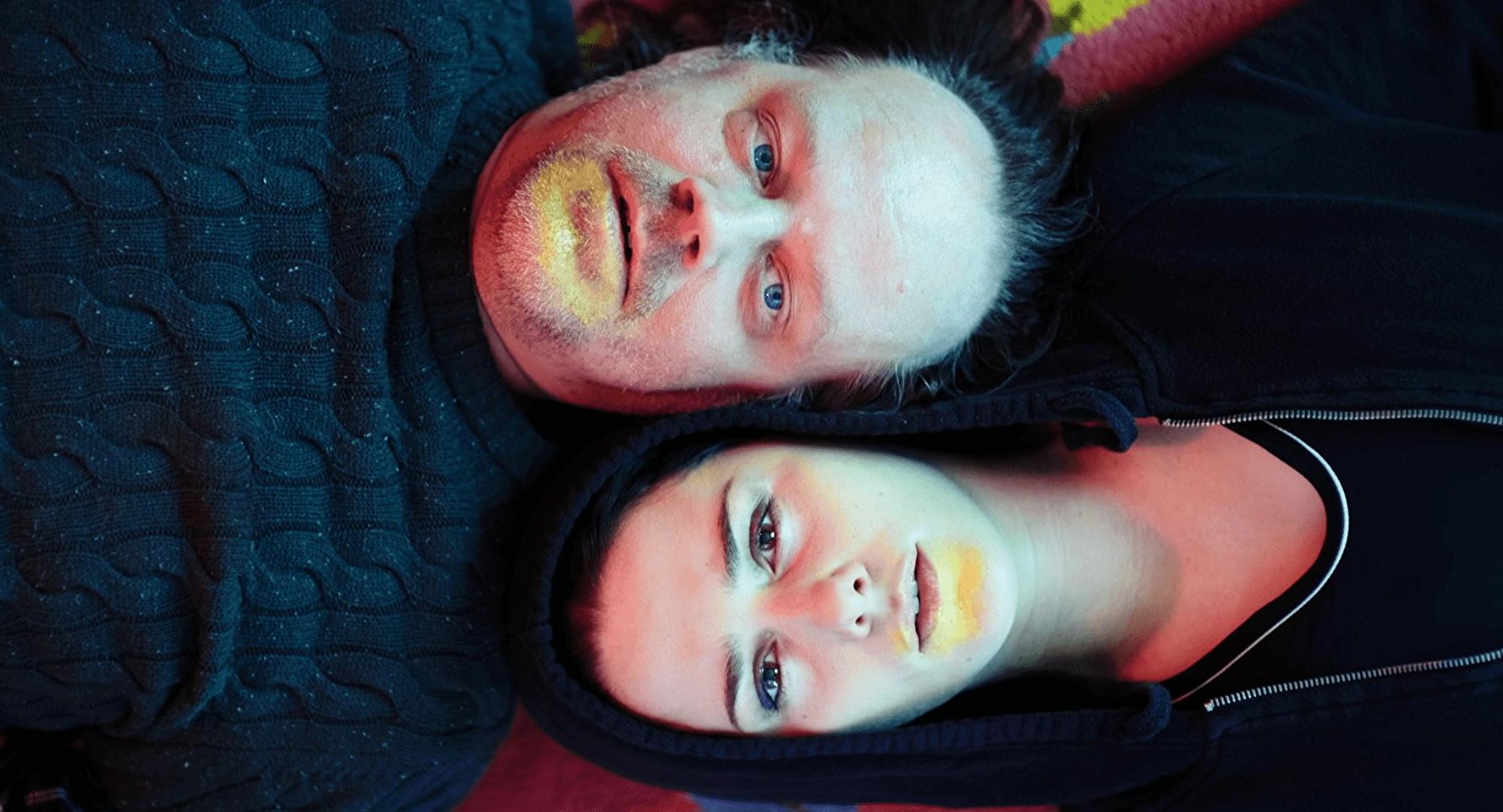 The rest of the story in Like Me is spare.  Kiya first buys a meal for a homeless man (who seems wisely wary of her intentions and cuts out early), then manages to bind, torture and kidnap the manager of a hotel where she’s staying.  Her captive, Marshall (Larry Fessender) is nearly as damaged as Kiya, and the two of them bond as much as either of them are capable of bonding.  That’s it for the cast, except for a pet rat who Kiya never names.

We never learn anything about Kiya’s history; nothing of her family background, or where she’s from.  We also never learn how she pays for her strange, transient lifestyle, a question that poked at my mind throughout Like Me.  Mockler doesn’t seem interested in explaining Kiya or rounding her out.  Instead, it’s as if she’s emerged fully formed from the darkest, most diseased corners of the internet.  She is a demigod for our time:  violence, sexuality, and destruction all fueled by a hunger for more hits. 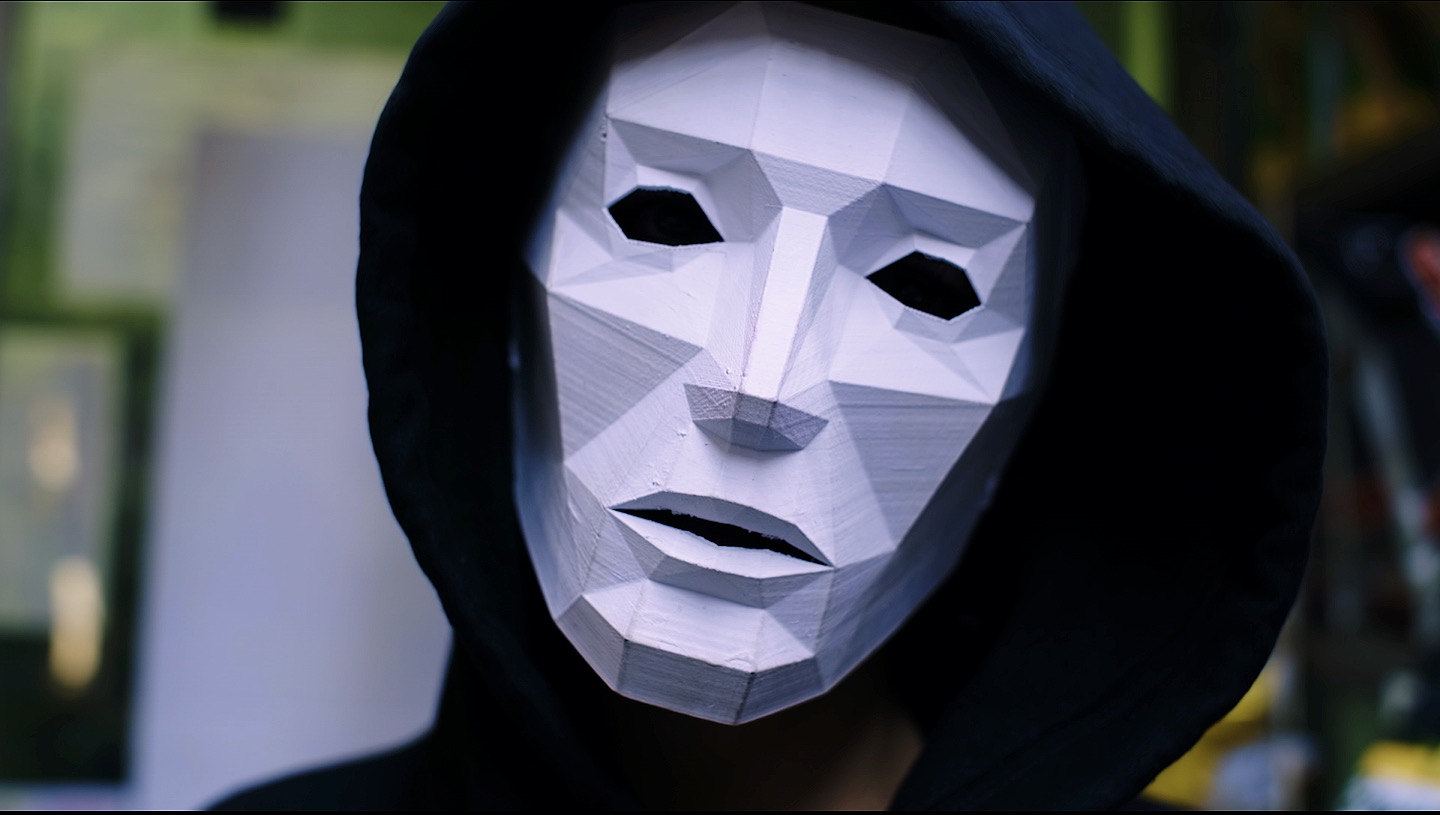 The performances in Like Me are all good, and memorable even when the parts are small.  Most of the screen time belongs to Timlin and Fessender, who have terrific chemistry together. Timlin is small and delicate featured, but manages to be quite frightening in her unpredictability.  Fessender is a seasoned and prolific actor and humanizes Marshall as lonely, grieving, and shame-filled while never letting us forget that he’s also a predatory, paint-huffing creep who was trapped by Kiya because he believed he was going to have sex with an underage girl.

What sets Like Me apart is the visual style, in service of a deeply disturbed central character.  Mockler fills the movie with vivid colors, hallucinogenic fades and double exposures, snippets of animation, and wildly fast edits.  It often feels more like a piece of performance art than a narrative film – and sometimes the performance art becomes really hard to watch.  This is especially true because of Kiya’s obsession with food.  A seasoned binger, we see tight shots of food – brightly colored cereal, bacon, pizza – being shoved into her mouth, and also see it coming back out.  When she buys the homeless man a meal she fills the table with food and seems intent on out-eating him.  But it’s her torture of Marshall that nearly raises Like Me to body horror.  After tying him to a bed she force feeds him until he vomits – all for the camera and the viewers, of course.  It’s a disgusting scene, and brutal.  A “normal” victim would be traumatized, but Marshall is already so emotionally crippled that he seems to take most of what Kiya does to him in stride.  He even begins to enjoy the online attention he’s receiving, though he has reason to worry how far Kiya will go to keep her audience satisfied. 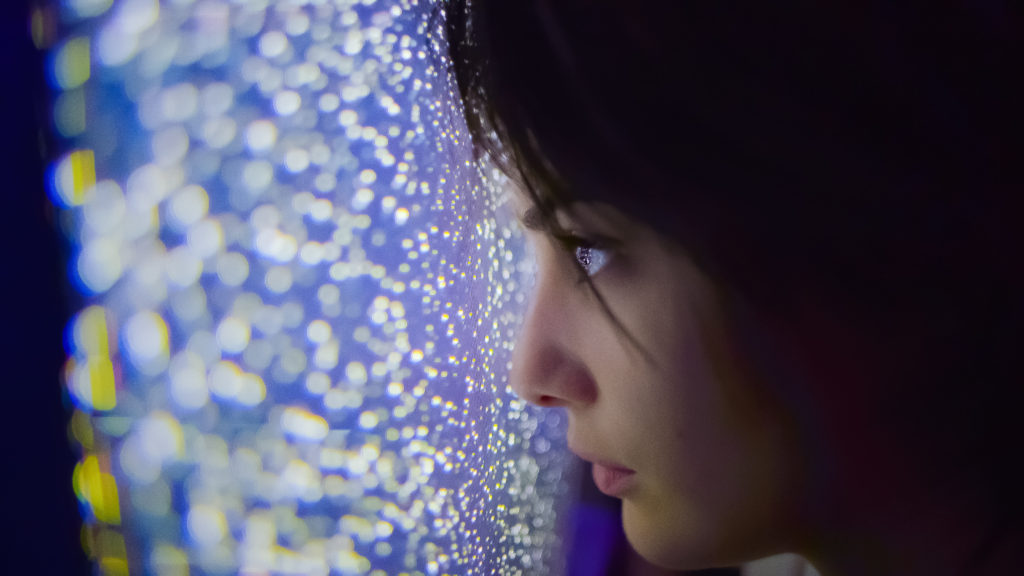 I’m not sure if Robert Mockler, who wrote, directed, and shared editing on Like Me, was trying to send a message about the dangers that social media poses or if he was simply creating a character disturbed enough to serve as a vehicle for his chaotic visual style.   There were many moments when I was able to appreciate the extravagant set design, intense use of color (credit to DP James Siewert) and bold editing (Jessalyn Abbott shares editing credit with Mockler).  But I was also put off by the repulsiveness and cruelty of much of the film, and by the coldness of Kiya herself.  The final scene, a violent confrontation that seems both inevitable and implausible, provided a welcome escape from a character I intensely disliked.  Surely Mockler didn’t intend viewers to say, “Thank God that’s over” at the end of his film, but that was my reaction.