Scary Clowns are finally back, and IT brings lots of laughs, as well as terror, in this fun adaptation of Stephen King’s epic book. 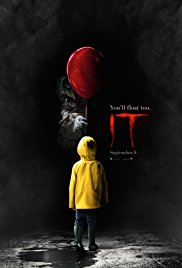 In what looks like the fall movie to save the abysmal summer box office, IT is already tearing up the screens in its opening weekend.  On Thursday night, IT debuted in several evening screenings before its official opening on Friday.  I was fortunate enough to attend a special “Clown Screening” hosted by The Alamo Drafthouse at Mason Park in the Houston, Texas suburbs of Katy.  Having just undergone our own city-wide horror, this movie event was rather cathartic, and the event hosted by the Alamo Drafthouse summed up the entire movie experience: Fun!

Attendees were encouraged to show up dressed as a clown.  Those who did were given a commemorative T-shirt of the film, and all who attended participated in a carnival game to win other prizes.  As is the Alamo Drafthouse’s custom, all of the pre-screening entertainment playing before the film featured some of the best, and hilariously worst, clown film clips, television shows, commercials, and more.  A pack of dangerous looking clowns greeted you in front of the theater giving out tickets to Houston’s number one haunted house to promote their grand opening at the end of September, after hastily working tirelessly to empty the location of the flood water that still existed prior to the weekend.  A good portion of their ticket sales this year, they said, were going to support recovery efforts around the city and coast.  Even in the midst of horror lovers most anticipated film of the year, kindness and generosity were on full display….until the lights went down for the film.

IT channels the feel of other classic Stephen King adaptations of adolescence and the struggles of misfits and outcasts, mainly Stand by Me and Carrie. 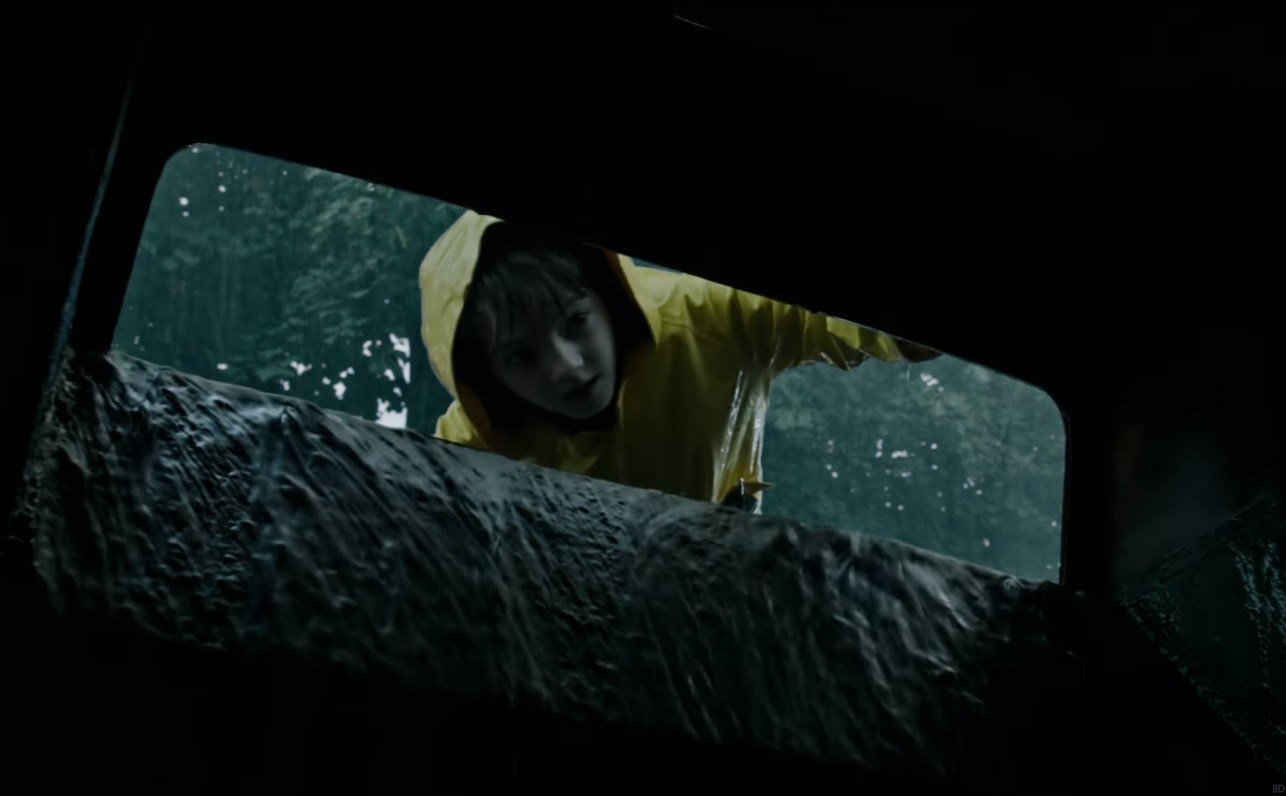 IT is often described as writer Stephen King’s tour de force, and after only having the 1990 television mini-series to represent it, this first big screen adaptation has plenty of built-in anticipation, especially after people got a look at Bill Skarsgård’s take on the demonic dancing killer clown, Pennywise, which was a dramatically different take than Tim Curry’s version in the 1990 version.  I have not read King’s book, but compared to the earlier mini-series version, director Andy Muschietti’s (Mama) version seems to be a more linear approach, following the young kids of the famed “Loser’s Club” who band together to fight whatever “It” is that is causing children in the area to go missing.

The first victim of the film that set’s off the events in the film is Georgie Denbrough (Jackson Robert Scott) who is following the paper boat (infused with wax to allow it to float without getting waterlogged) his brother Bill (Jaeden Lieberher) had given him to try out during a rainstorm.  Bill, who is sick, sends Georgie out, and it is then that Georgie encounters the dancing clown named Pennywise.  When Georgie never returns home, Bill is determined to find him, or whatever happened to him. 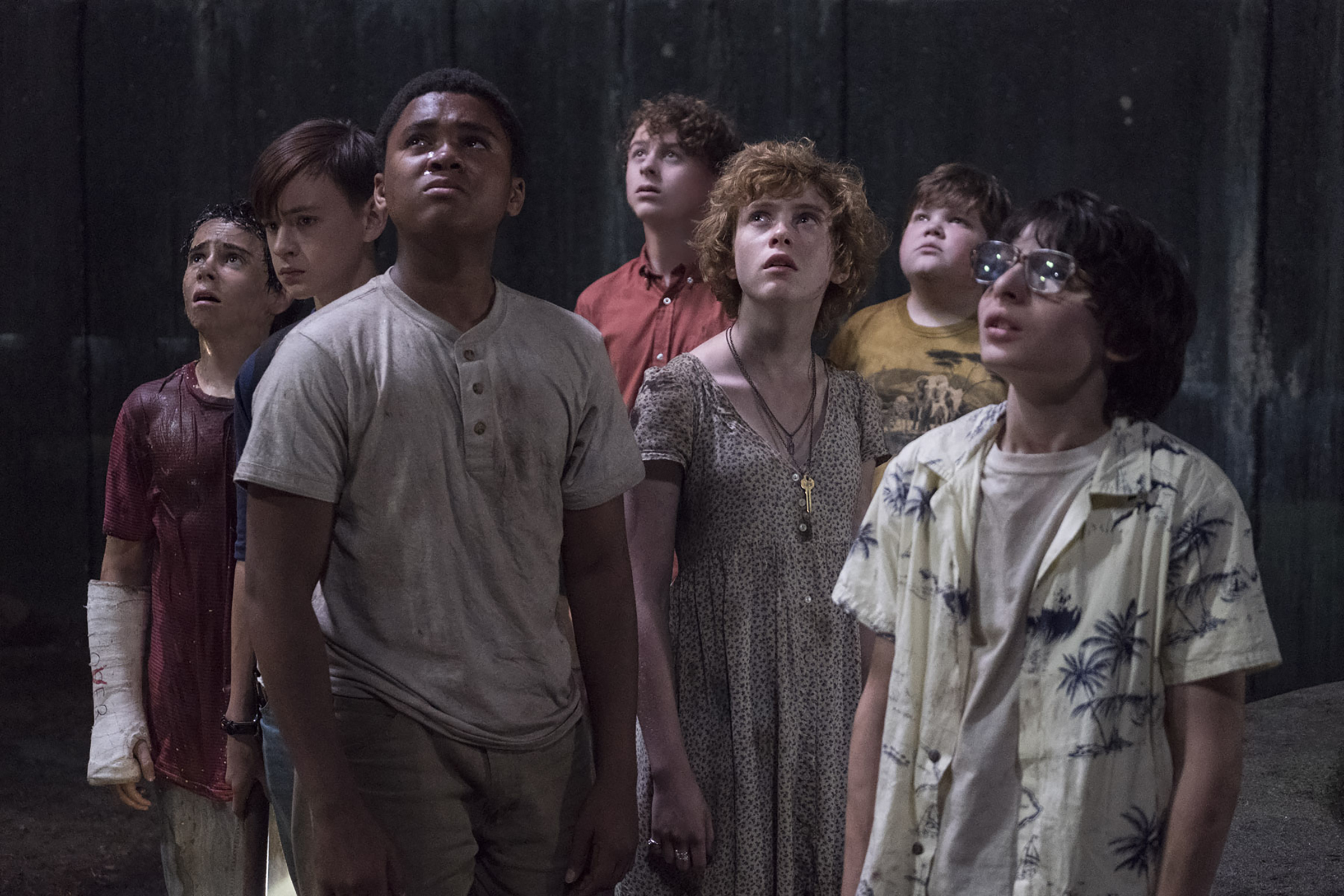 Each of the other “losers” have their reasons for being outcast.  Bill Denbrough of course is the leader of the outcasts, driven by his brother’s disappearance, and his struggle with stuttering that makes him a target of school bullies. Beverly Marsh (Sophia Willis) is a girl with an abusive father, no mother, and is the rumored “slut” of her school.  Ben Hanscomb (Jeremy Ray Taylor) is the overweight new kid in town who prefers the library where he can hide than being out and about being picked on by the likes of Henry Bowers (Nicholas Hamilton) and his cronies.  Richie Tozier (Finn Wolfhard) is the wise-cracking outcast of the group and who wears thick glasses.  Eddie Kaspbrak (Jack Dylan Grazer) is the frail, asthmatic who is constantly being watched over by an over-protective mother. Stanley Uris (Wyatt Oleff) is a Jewish boy who struggles to prepare for his bar mitzvah, and who is obsessed with logic, and cleanliness, and is a main target by Bowers and his gang.  Finally, Mike Hanion (Chosen Jacobs) is an African-American kids who not only stands out to be bullied because of his ethnicity, but also because he is home-schooled by his grandparents following the death of his parents. 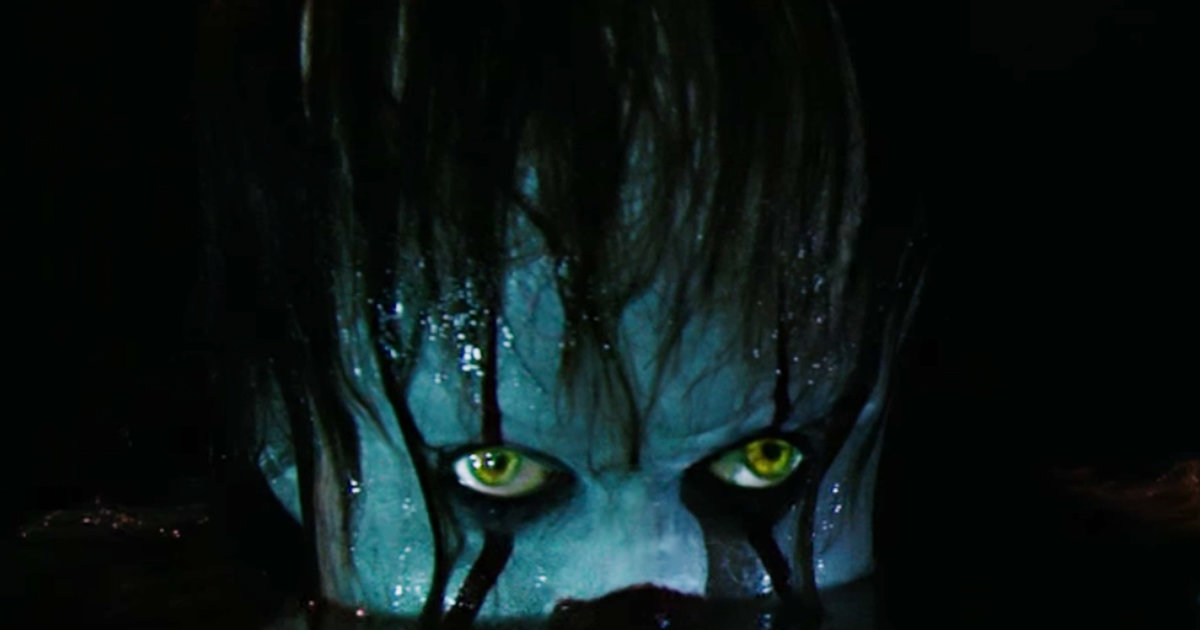 As much as Pennywise is the true enemy of the town of Derry and of children in particular, the bullies are also a central threat. IT channels the feel of other classic Stephen King adaptations of adolescence and the struggles of misfits and outcasts, mainly Stand by Me and Carrie.  Carrie is a good comparison in terms of depicting how brutal teenagers can be towards others, all the while demonstrating that the bullies of the world often spending time finding victims of their own rage in order to deal with their own victimization in their lives.  Violence begets violence.  As brutal as Henry Bowers can be, we see that he faces his own fears every time he goes home to his alcoholic, police officer father.

Stand By Me is the possibly the best comparison in how IT portrays the unity of this band of misfits as they go in search of what is attacking their town, and giving them the visions of their deepest, darkest fears.  The humor of this group of “losers” perfectly balances the dark, bloody encounters with “It”, in its various manifestations.  The humor will win over the most hesitant of film goers who is on the fence of seeing this film due to it being a horror film.  Honestly, the film is not overly scary, especially for the hardened horror film viewer.  The moments of fear and terror are well done, with enough comedic levity being placed into the script at the perfect moments by the writers (Chase Palmer, Cary Fukunaga, and Gary Dauberman), to make this a fun experience, in spite of the impending terror lurking in each scene. 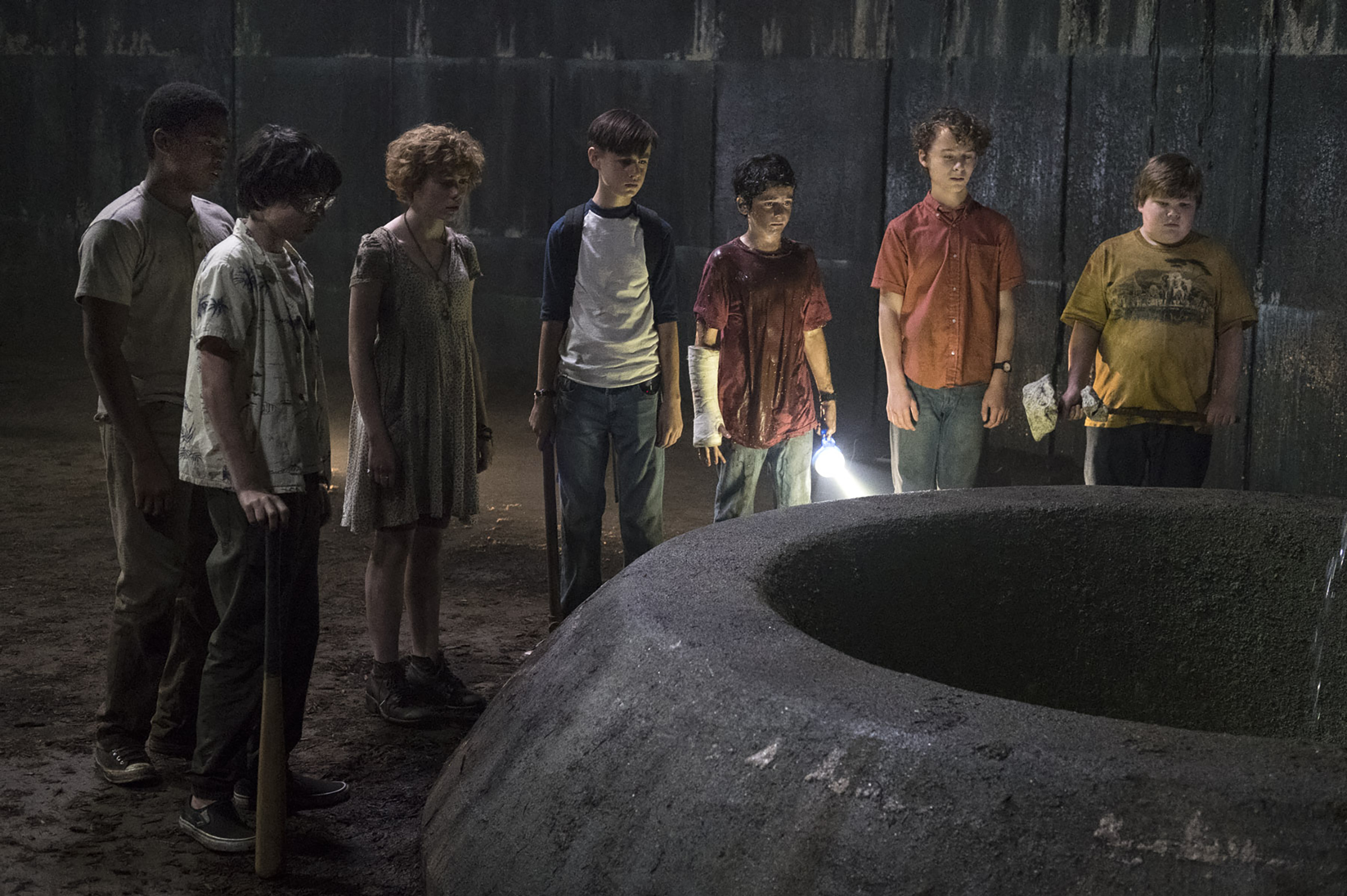 IT (2017) wisely abandons the back and forth time jumps of the 1990 version to focus on the childhood experiences of “The Loser Club” with “It”.  This decision creates a better opportunity to establish the characters of these children, as they struggle with the terror of the town, as well as their own emerging adulthood. This film also moves the 1950’s timeline of the book and previous mini-series into the 1980’s.  The upcoming sequel will jump forward 27 years to the modern times, by the time it hits theaters, as this group of “losers” must face their childhood terror as adults.

IT is going to rule the box office for many weeks, and may be one of the best cinematic Stephen King adaptations in cinema, redeeming the mess of this year’s other high profile King adaptation, The Dark Tower.  Enough cannot be said to praise Skarsgård’s performance as the murderous clown entity, whose origins have been mostly kept out of this film, allowing for a deeper investigation in the future installment.

Scary clowns are finally back to scare a new generation of fans!  Thanks to the Alamo Drafthouse, not only were we able to see the film, but we were able to experience it with even more tension in the theater than usual as you looked around and saw the theater populated with scary clown faces looking back at you at every turn.  Red balloons even adorned the theater, including in the bathrooms, and tied to various signs throughout the parking lot, creating the perfect aesthetic to experience this film.  Houston has survived its own flood terror and is well past wanting any more rain in the near future, but on this night, we were happy to experience a film that promised to scare us with the all-too-real tagline, “You’ll float too!” 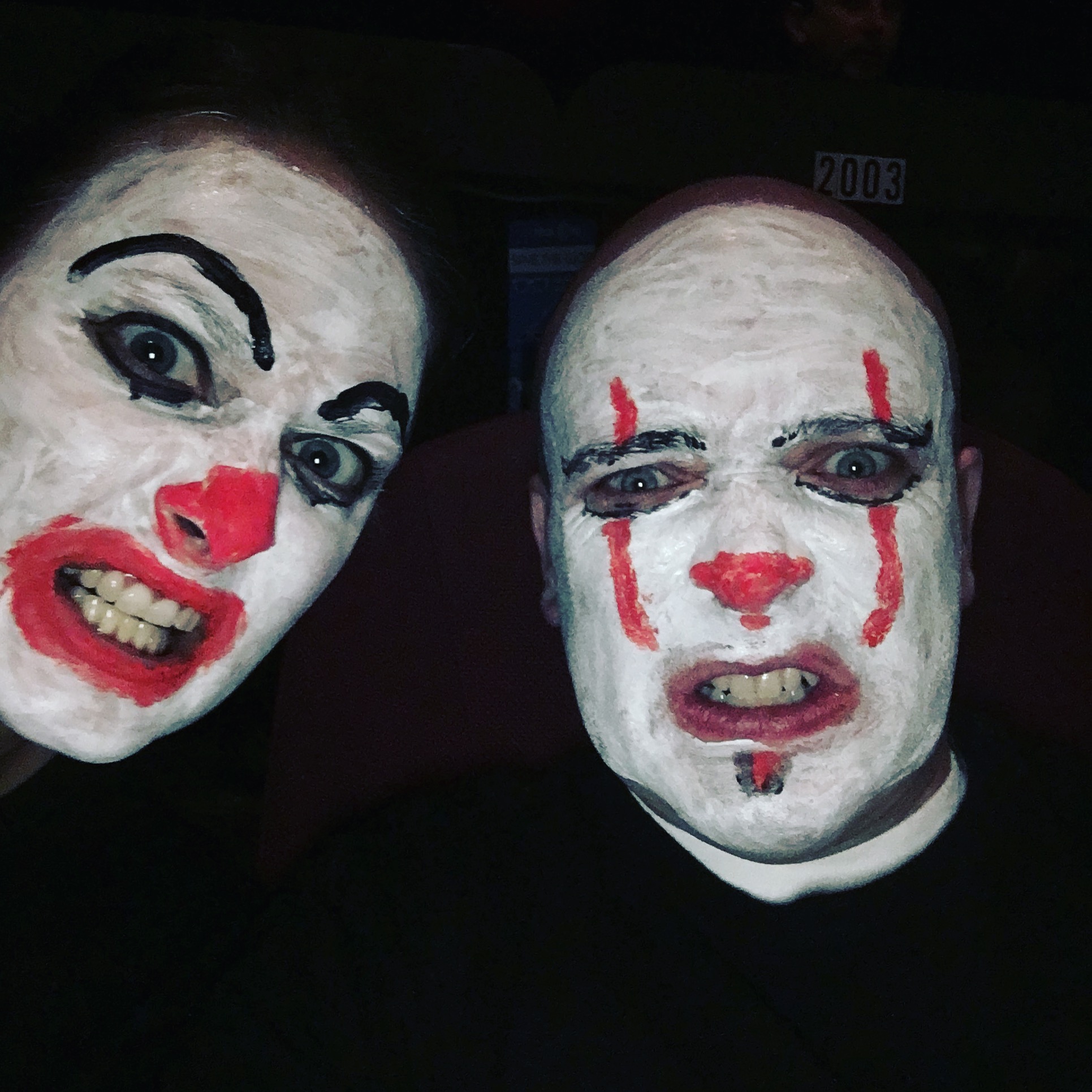 Two clowns from the Alamo Drafthouse Mason Park’s “IT clown screening” Event, namely my wife and I!