Idris Elba and Matthew McConaughey Can’t Save this Muddled Mess 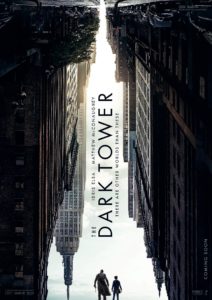 Let me begin by admitting that I have not read any of Stephen King’s eight Dark Tower novels on which Nikolaj Arcel’s new movie is based.  The books were influence by a number of other works:  Robert Browning’s poem, “Childe Roland to the Dark Tower Came”, J.R.R. Tolkien’s Lord of the Rings, Arthurian legends, and Sergio Leone’s 1966 Western film, The Good, the Bad and the Ugly.  Those are fine sources for inspiration, and perhaps King’s books are fine as well.  The movie The Dark Tower, however, is not a good reflection on its inspirations.  Rather than drawing on the best those works have to offer, it’s as if they’ve been thrown in a blender.  What’s come out is lumpy mixture of cliches and familiar types, with little coherence and less dramatic tension.

The Dark Tower’s particular blend brings together fantasy, sci fi, and Western (a combo we’ve seen before, most famously in the Star Wars films).  Each of those genres requires immersion in another world, but to work successfully even the most fantastical story must have some internal logic,  some rules by which the film’s unique universe operates – rules that we, the viewers, can discover, understand, and respect.  The Dark Tower may have logic and rules buried somewhere deep in its circuits, but it’s not sharing them with the audience.  I left this film having so many questions. 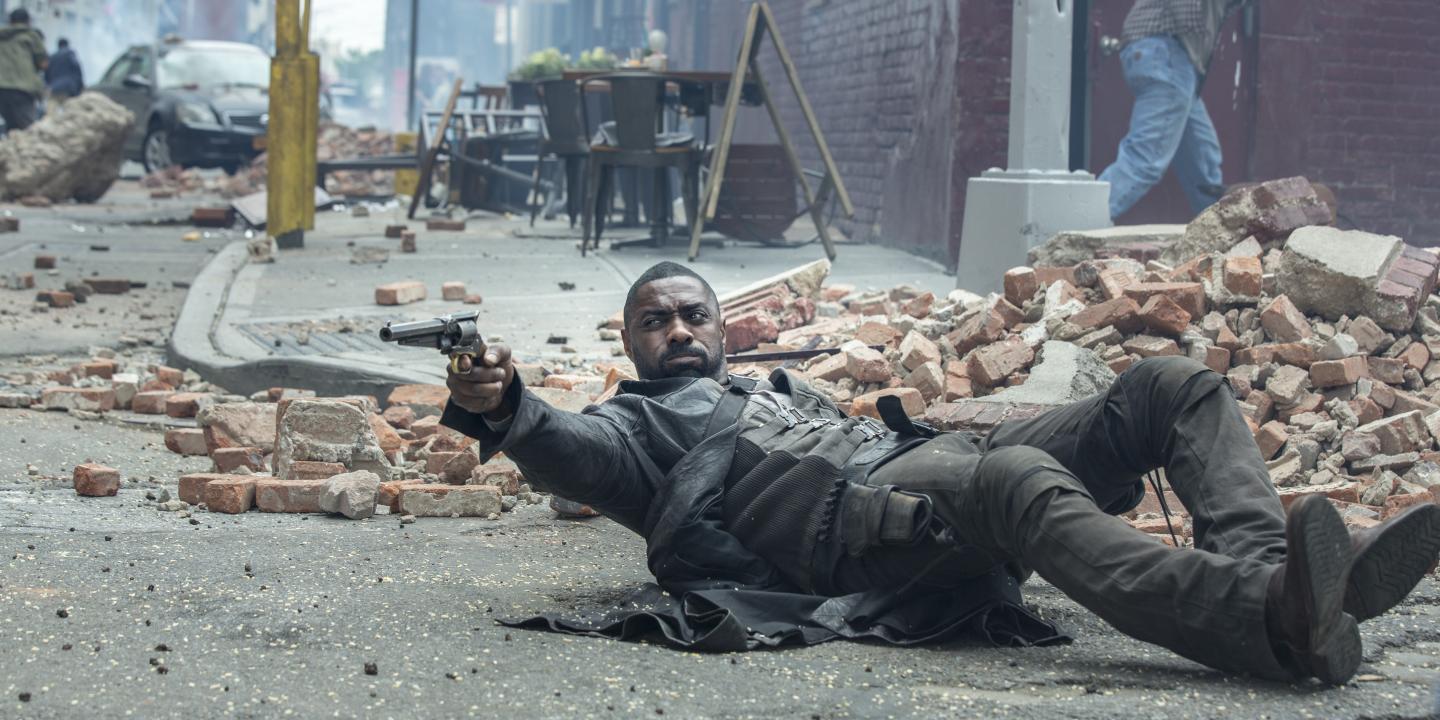 The Dark Tower starts promisingly.  A pleasant vision of children at play is interrupted by a blaring alarm, and some of the children are singled out and herded into a black ziggurat-style structure, where some sort of energy sapped from their brains and into a beam that blasts a hole in a looming black tower.  This scene is revealed to be the dream of a young boy, Jake Chambers (Tom Taylor).  He is haunted by dreams of that tower, of a gaunt man in black, of another man wielding a revolver.  The dreams have Jake convinced that something terrible is coming, while his mother and step-father are increasingly convinced that he is mentally unstable.

When Jake’s mother tries to have him sent for a weekend at a psychiatric hospital Jake rightly notices that there’s something off about the staff who come to pick him up, and he narrowly escapes the clutches of these people who are not people.  Before long he’s found a portal to another world in an unseen multiverse and is soon partnered with the man with the revolver, the last of a long line of Gunslingers, Roland Deschain (Idris Elba).  Roland, who lives in desolate dimension called Mid-world, is seeking revenge against The Man in Black (Matthew McConaughey) a sorcerer whose “magics” allow him to kill people by the power of his command.  “Stop breathing”, he says, or “Burn”.  And people obey.  Roland’s father, played by Dennis Haysbert in flashbacks, was one that stopped breathing at the Man in Black’s command. 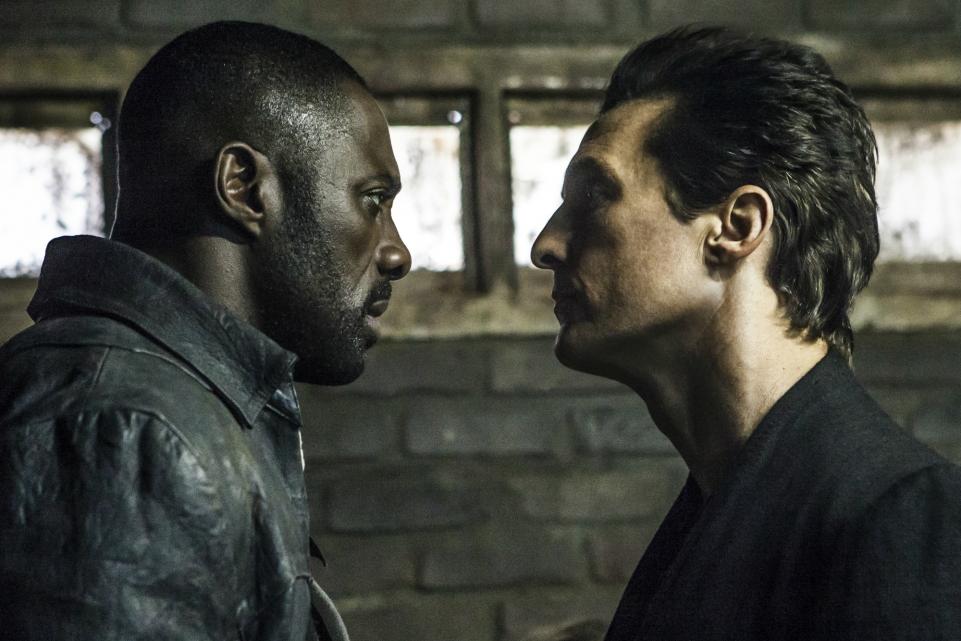 I find myself wanting to make a long story short, although one thing in The Dark Tower‘s favor is that it is a fairly short story:  only 95  minutes.  Thank goodness.  Even so, this relatively short film doesn’t feel taut or compact.  It feels like too many ingredients went into that blender.  The Man in Black, whose given name is Walter, is trying to destroy the dark tower that keeps the multiverse in tact.  Only “the mind of a child” can destroy the tower, hence the children strapped into the chairs having their brains drained.  Jake wants to keep the tower up, for the sake of humanity, but is in particular danger because he has powerful psychic abilities – he has the “shine” in Stephen King’s parlance – and that makes him especially attractive for Walter’s purposes.  Roland shifts from seeking only revenge to aiding Jake in his quest to save the universe.  Other things happen, other characters come and go.  And almost none of it made sense to me.

As a I said, I left the film with many questions.  Why gunslingers?  Guns don’t seem an especially effective strategy against The Man in Black’s magic.  What’s is the Man in Black’s origin story?  Is he human?  What shared history do he and Roland have?  Why is Roland uniquely resistant to the Man in Black’s magic?  Why does Mid-world seem like a decaying version of earth, with it’s ancient, ruined theme parks?  What, exactly, is that tower doing, anyhow?  Why can only children’s minds do damage to it?   Who is the Crimson King, the subject of so much graffiti in the film?  And what kind of a name is “Walter” for an otherworldly sorcerer, anyway?

I wouldn’t say the questions were exactly pressing.  They were not burning questions.  That would imply that the movie had me in suspense or agitation trying to understand it, but it wasn’t dynamic enough to elicit that kind of response.  I did feel frustration with a director and screenwriters (five of them) who either assume we all knew the backstory (is it in the books?) or don’t care. 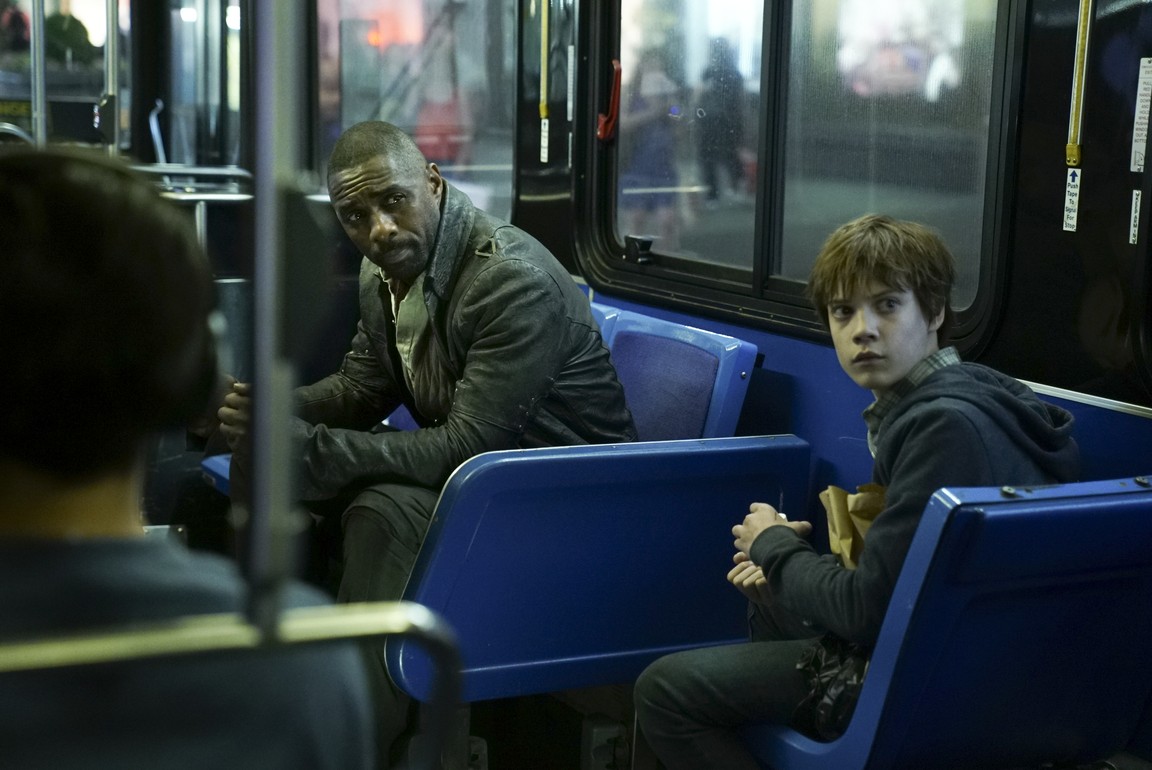 As for the central performances, Taylor is adequate as the wide eyed child haunted by what he’s already seen.  Elba does as much as he can with stiff dialogue.  He is a strong, solemn presence on screen, believable in the highly choreographed gun fights.  The real casting problem is with McConaughey as the film’s villain.  I once saw Matthew McConaughey’s mother on a late night talk show.  She’s a striking woman with a lean face and high cheek bones.  McConaughey looks more and more like his mom as he ages, and in The Dark Tower, in particular, he has cheek bones and a sinewy figure that would be the envy of many a woman of a certain age.  In combination with a plunging neckline and jet black hair worthy of Elvis, McConaughey cuts a strangely androgynous figure.  He is not so much menacing as simply theatrical.  Watching him catch or repel bullets reminds one less of Neo in the Matrix (an obvious influence on these scenes) than of a Chris Angel show in Vegas.  And his dialogue is not an improvement.  In one scene, after extracting information from two of his minions, he commands them, “Now kill (dramatic pause) each other.”  And they do, of course, but the line is delivered with such a mustache-twirling air that it’s impossible to take seriously.

Matthew McConaughey is a good actor.  So is Idris Elba.  Stephen King is a generally solid writer, who paid homage to some truly timeless works of art in his his Dark Tower series.  But this is a bad film; bad enough that it diminishes everything is touches – the genres, the source material, the cast.  The film ends with what is an obvious set up for a sequel, but no sequel is necessary.  In fact, please, I implore you, cinema powers that be:  don’t make a sequel.  The only way forward is to throw this Dark Tower on the scrap heap and start all over again.