I Do… Until I Don’t Gives Us Retrograde Vows 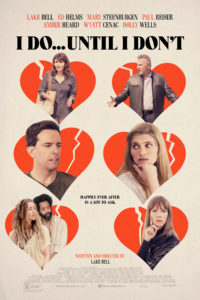 There is a long and venerable heritage of films that have ruthlessly driven a stake into the heart of the sacred institution we call marriage. The most lacerating have figured it as tantamount to bondage, delusion, and masochism; more charitable ones have taken to indicting its monogamous, heterosexual foundation and inegalitarian power dynamics. Recent, notable films that have set out to torpedo its illusion include David Fincher’s adaptation of Gone Girl (2014), Ruben Östlund’s Force Majeure (2014), and Yorgos Lanthimos’s The Lobster (2015).

Anyone looking for Lake Bell’s newest film, I Do… Until I Don’t, to join this tradition will be sorely disappointed – as will anyone looking for a film that has any insights to offer whatsoever, whether into marriage or agave spirit-making. Initially, the film teases an actual inquiry into the possibly untenable promises of matrimony. Vivian Prudeck (Dolly Wells), an allegedly esteemed documentary filmmaker from England, has come to Vero Beach, FL for her latest project, in which she will interview unhappily betrothed couples to prove that marriage is unsustainable. How, after all, can someone devote half of their life to one other person? Her thesis: marriage as a lifelong agreement between two people is an anachronistic and fatally flawed concept, and should be revised as a seven-year contract with the option to renew.

Alice (Lake Bell), a meek, neurotic woman irrationally reverent of Ms. Prudeck, is quick to become ensnared in this newest film. In her perpetually worried mind, her marriage to Noah (a familiarly guileless Ed Helms) is on the rocks: in addition to the stress induced by their floundering blinds business and their unsuccessful attempts to have a child, she suspects that Noah has a wandering eye for her hippie-dippy sister, Fanny (Amber Heard). In the first of the film’s irritating contrivances, it turns out that Fanny and her mate Zander (Wyatt Cenac) are also involved in Ms. Prudeck’s film. The stereotypically bohemian couple, not married but in an open relationship, would seemingly add some needed diversity to the project. Rounding out the film is a third pair, the acrimonious Cybil (Mary Steenburgen) and Harvey (Paul Reiser), whose marriage has degenerated into endless sniping matches.

Filming goes smoothly at first. Although Noah considers his marriage a mostly contented one and is kept in the dark about the nature of the project, Alice plays up their discord to Ms. Prudeck’s evident glee. The most rancorous scenes from a marriage, however, are supplied by Cybil and Harvey. As the senior couple, Steenburgen and Reiser’s salty repartee has a bite, and sense of shared history, not equaled by the others, and their scenes are among the only in I Do… Until I Don’t that feel somewhat believable. Bell and Helms, meanwhile, continually fall back on a generic awkward-comedy shtick consisting of mannered physical and verbal fumbling. And then there’s Heard and Cenac, around whom the others improbably pivot, whose characters’ happy-go-lucky attitude toward seemingly everything upsets Ms. Prudeck’s desire for drama. The duo are afforded some humorous moments – Heard’s Fanny notes that she can’t breathe without incense burning, and Cenac nails a deadpan delivery of “Namast-go” in response to an interloper’s “Namaste” – but the exaggerated types they’re tasked with performing mostly produce warmed-over sitcom-level jokes. They are as superficially drawn as Wells’s Vivian Prudeck, whose British accent means she is to be distrusted.

Distrust her we do, but only because Bell’s schematic script gives us no other option. Ms. Prudeck is never depicted as anything but an insufferably pompous, selfish, artistically bankrupt fraud, a mustache-twirling-grade arch-villain at whom we’re meant to scoff. As a result, there is never the sense that her film will actually prove her thesis, let alone reveal anything of worth on the subject of marriage. We simultaneously get that sense about Bell’s film, as well. I can’t begin to imagine what led the director to paint such a derisive caricature of a woman whose arguments are valuable and valid. Rather than fairly consider her claims about the detriments of traditional marriage, Bell makes her into a grating, cartoonish straw man, a burlesque embodiment of artistic pretense whose methods and views are posited as unquestionably phony. Bell gives her a single crewperson (because we know movies only take two to make), a lesbian whose sexual orientation precludes her from assuming an active role in the film’s heteronormative universe.

In an era when nontraditional relationships and living arrangements are slowly gaining favor in the West, I Do… Until I Don’t feels like a dispiriting slap in the face. Even the bohemian couple, Bell’s one gesture at a progressive sexual politics, are revealed to be ostentatious fakes who actually, deep down, really would prefer monogamy. We arguably don’t need another cynical portrait of the follies of marriage, but we certainly don’t need a film that facilely, unabashedly extols it, either, that reinscribes it as a sacrosanct institution while holding out nonconforming perspectives as fodder for ridicule. Bell would have been better off making a satirical speculative fiction, à la The Lobster, focused on the idea of the seven-year marriage contract than this retrograde misfire.