This costume drama from 1924 features Rudolph Valentino and Bebe Daniels, two of the big stars of the silent era. Set in France and England during the reign of King Louis XV, the intrigue of the court is grist for the mill in this feature film of pride, arranged marriages, and assumed identities.

The film opens as Louis XV (Lowell Sherman) is bored—again—with the entertainment on offer at the court. Apparently, Louis knows what every woman in the early 1920s knows—that the Duke Phillippe de Chartres (Rudolph Valentino) will bring a smile to everyone’s face. Princess Henriette (Bebe Daniels) has just that evening joined court life, having graduated from the convent school where she was sent to be educated. Seeing Chartres, she is smitten…that is, until she overhears Richelieu telling someone that Chartres is an ally of Madame de Pompadour. Pompadour is, of course the love interest of Louis, much to the dismay of Louis’ wife Marie. Henriette is incensed that Chartres would be the ally of such a terrible woman. 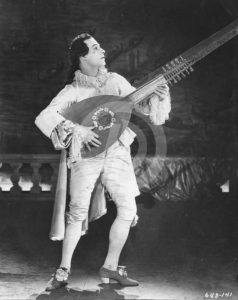 Not even this could get Bebe Daniels to like him…

And yet, Henriette is still ambivalent. She wants to hate Phillippe, but can’t—at least, not entirely. Her outbursts are enough to make Phillippe dislike her intensely enough to snub Pompadour and have a bounty put on his head by Louis. What else is there to do besides flee to England and pretend to be a barber for royalty (calling himself Beaucaire)? The assumed identity nearly lands him in hot water on more than one occasion, but as all good Hollywood fantasies, this one ends upright with the guy getting a girl in the end. But which girl? The English royalty that Valentino’s character chases whilst in England or the girl he left back home? No spoilers here—but it’s a fun ending to be sure. 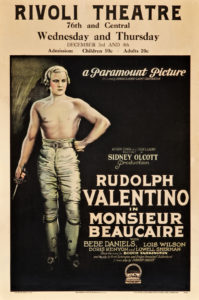 Folks, he looks way better with his shirt off than this poster makes him seem.

This film was not terribly well received by the public. Some commentators speculate that this is due to the audience being displeased with Valentino being overly made-up (given that this is France during Louis’ reign, this is a perfectly natural setting for stockings, powdered wigs, and carriages). I’m not certain about this. There are a couple of flaws in the movie which strike me: first, I don’t ever actually believe in the screen chemistry between Valentino and Daniels. Given that the version of the film I saw is likely from a 16mm copy, the image is very soft. This may be why Daniels’ performance seems a bit flat. But Valentino himself is dashing most of the time and downright hammy at other times.

After the first sword-fight in England, the direction is quite interesting. You see only the swords and the one supervising the fight. When one party is wounded, one doesn’t know who is wounded until a big reveal later. The shot of Valentino smiling at one of his adversaries is an unfortunate moment of ham which clouds the fun part of the picture.

For this review, I wanted to bring in an aspect of the picture which has rarely been experienced since it was first shown in 1924: the score, by Hugo Riesenfeld. Having discovered the sheet music in an archive, I decided it might be fun to try to synchronize the score to the action on screen. What I discovered was a wonderfully-paced score by Riesenfield. While it is sometimes heavy, it fits the period of the film very well (especially if one factors in that the love themes were popular tunes in 1924).

The sword fights are a ton of fun. When Valentino fights the henchmen who try to gang up on his evening with Lady Mary (Doris Kenyon), the camera angles are fun and the music is energetic. It does seem to be what the creators of Singin’ in the Rain had in mind with the Dashing Cavalier movies that character Don Lockwood makes. The genre was, of course, much larger than Beaucaire. A more famous example of the genre was Don Juan, made two years later.

I would love to have seen a Chartres who learned something—who changed. An attempt is made at that in the last reel or so of the film, but it seems an afterthought among the revenge and costumes. Beaucaire is an action film with a flimsy love veneer. Rather than putting me off, I rather enjoyed seeing Valentino outsmart the petty nobles as he goes along in the film. He is a graceful fighter, both with words and the sword.

For an enjoyable costume drama, look for Monsieur Beaucaire. Grapevine Video has a watchable edition which is what I used to sync the original score. Thanks to Fritzi and her Movies Silently blog letting me participate in the #Swashathon!