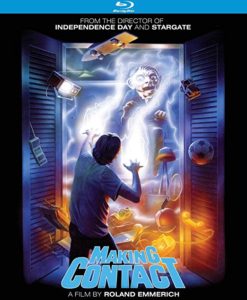 When the big selling point is “A film by Roland Emmerich – the director of Independence Day!” – a boast that I’m pretty sure even Independence Day 2 avoided using – you know you’re probably about to watch a stinker.  Even if “ID4” was an alright summer potboiler, it’s been downhill ever since.

Ostensibly the tale of a young boy (Joshua Morrell, about the same age as Henry Thomas in E.T.) in suburban Southern California (roughly the same subdivision which Elliot lived in E.T.) grappling with the loss of his father (close enough to the underlying father issues in E.T.), Making Contact may be an inept and wooden cash-in made by a giddy fanboy, but it’s never dull.

Just how badly does Making Contact want to be that certain Spielberg blockbuster? Look no further (no really – do yourself a favor and look no further) than the fog machine ambience of most every scene, thick and billowing in one shot, completely clear in the reverse. Not exactly the work of ace cinematographer Allen Daviau…

Overflowing with head-slapping oddity and an everything-and-the-kitchen-sink approach to genre moviemaking, it plays as though the writers divvied up the workload so that each would take turns writing a page at a time without consulting the developing work of the other two.

Right up the way from the main characters’ house, quite literally, is the Bates mansion from Psycho. It’s boarded up now, and prone to interior collapse, although those details can’t deter a group of youthful explorers, spurned on by a diabolical living ventriloquist’s dummy. The dummy, a monocled blend of President Reagan and Alfred E. Newman, is the film’s main antagonist. He speaks in a harsh gravelly voice, and like everyone else in the film, his lines are delivered one abruptly edited sentence at a time. 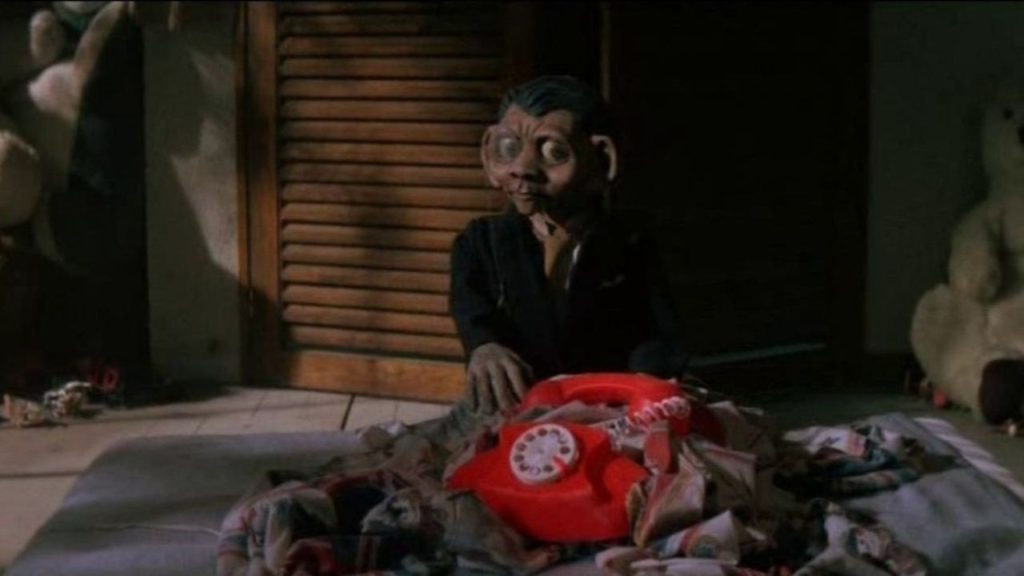 The boy’s mother (Eva Kryll) is the other star of the film, her big moment being a gruesome duel homage to both Carrie and Gremlins, enduring a bout of flying kitchen knives. The poor widow is then tethered to her son’s gravely milquetoast school teacher for the second half of the film, following his unannounced arrival at her house legitimately looking to discuss her son’s recent behavior. “You should consider getting the boy professional help.” It’s the only conversation they have, attempted several times in-between fleeing from chaotic supernatural phenomena and visual effects that proclaim the glory of the matte line. Not exactly a love connection.

Incoherent on every level, and quite enjoyably so, Making Contact nonetheless boasts no fewer than three screenwriters, one of which is Emmerich himself. Overflowing with head-slapping oddity and an everything-and-the-kitchen-sink approach to genre moviemaking, it plays as though the writers divvied up the workload so that each would take turns writing a page at a time without consulting the developing work of the other two. Thus, each writer, having agreed only on the character pool and the initial premise, would only be building on his own flimsy story points, every third page. Then, after seventy-nine pages of this avant garde exercise, Emmerich called it a day, scraped together a million and a half bucks, hired a few terminally inexperienced actors, and filmed the first draft. 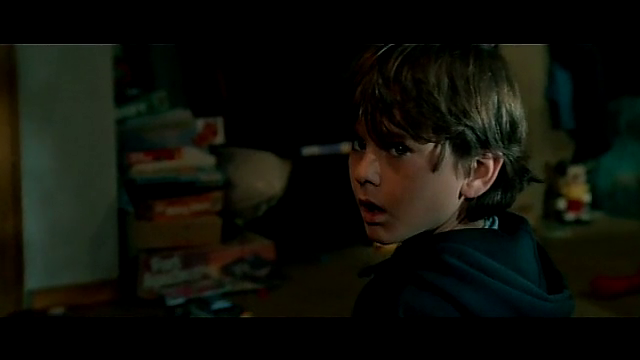 That’s one theory, anyway. How else to explain the manic indecision as to whether this is a rip-off of E.T., Poltergeist, or Close Encounters of the Third Kind? Whatever the case, Emmerich and company hopefully learned that it’s a good idea not to actively remind the audience of all the other movies you’re actively ripping off. From top to bottom, Making Contact is stuffed with all manner of mid-1980’s toys, posters and general pop culture clutter. The boy’s room is an inconsistent barrage of Star Wars toys, Disney figurines, kitschy board games, and pro sports and movie posters (Note from Legal… How much of this was cleared for inclusion, fellas…?) that one can’t help sinking into rose-colored nostalgic distraction.

For a while, after piling on more kids! More kids!! More more more to the cast, Emmerich actually seems to lose track of which kid is the star. By Act III (we’ll call it that), he’s got one group lost in a half-baked Goonies scenario, another hanging around the main character’s quarantined house apparently waiting in vain for Peter Coyote, and a third group mounting some sort of vague assault, led by a kid in full Darth Vader regalia. Either that, or it’s all the same kids, and the editing is that much of a mess.

Incidentally, “Making Contact” is also probably the title of a bonus feature on the DVD of the 1998 Jodie Foster vehicle, Contact. It would be listed right there amid the myriad of other added value, right before the production designer commentary track and motion menus. It’s been a while, but I’m sure I can safely say that that “Making Contact” is the superior filmmaking case study. 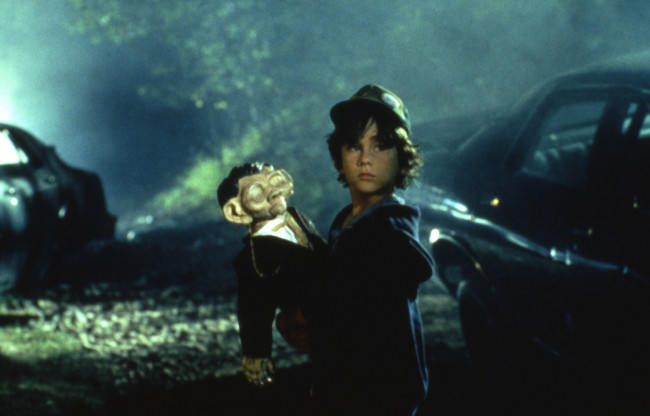 To be fair, what we’ve got here is a U.S. version of a film that was originally nearly twenty minutes longer in its native Germany. Making Contact (also known as Joey, depending on the poster), though filmed in English and set in Virginia Beach, was reportedly mostly shot in Germany. Who knows, maybe that explains a thing or two about why the movie is what it is. But probably not. The longer version has been issued on DVD in the past, so comparison is certainly possible if not necessarily advisable. Could twenty extra minutes possibly be a positive for a movie like this??

At the end of the it all, we’re left having experienced seventy-nine minutes of some of the Best Worst faus-Spielberg ineptitude on this side of Indiana Jones 4.

Get this blu-ray, gather some like-minded friends, and prepare to make contact with an evening of eye-rolling fun.

Kino Lorber Studio Classics’ (quite loosely in this case brandishing both “Studio” and “Classic”) blu-ray release looks nice and shiny for a thirty-plus year old turd. How Roland Emmerich ever parlayed a major career out of this, I’ll never know. There are no extras other than a few trailers, but maybe that’s for the best. Does one really want the delicate mystique of Making Contact pierced with insider knowledge and/or expert explanation?? Yes, the barebones approach allows us to truly stew in the unintelligible smorgasbord of it all.

All that to say, Making Contact is one supernaturally bad movie. Fantastically so. Right down to the mercifully short running time, it delivers on nearly all of the inadvertent delights of genre cinema gone wrong, in an all-ages package. Bewildering mishmash of other movies? Check. Glorious shoddy early work from a future industry titan? Check. Atrocious acting and dialogue? God bless these actors, check. Mystifying horrendous visual effects for the sake of visual effects? For the love of mercy, check check check. Throw in a talking dummy as the villain, and you’ve got a piece of work that no connoisseur of Best Worst Movies can afford to be without. Get this blu-ray, gather some like-minded friends, and prepare to make contact with an evening of eye-rolling fun.

The images in this review are used only as a reference to the film and do not reflect the actual image quality of the Blu-ray.