Wayne And Garth Show Us How To Party On 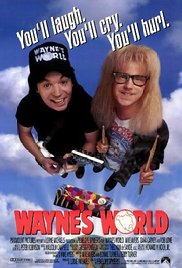 Ah, Wayne’s World. This is my first #52FilmsByWomen entry that has lead male characters; and not just any male characters, but those iconic metalhead slackers, Wayne and Garth. Mike Myers was a Saturday Night Live cast member but new to feature films when he adapted these popular characters – hosts of their own cable access show in Aurora, Illinois – for the screen, and the resulting happy haos remains one of the very best SNL films.

Wayne (Myers) and Garth (Dana Carvey) are a bit like Bill and Ted, if Bill and Ted never made it out of their hometown and were still living with their parents 15 years after high school.

As silly and exaggerated as the characters are, somehow I feel like I know these guys. These are the dudes that hung at out the record store/head shop in my own hometown, or the guys who were are always at the mall video arcade when I was in college, or the crowd that can often be seen in the parking lot of a particular convenience store.

Maybe Wayne and Garth are not the most upwardly mobile – “I have an extensive collection of name tags and hairnets”, Wayne says when describing his employment history – but they enjoy the place in which they are, right this minute. There’s a scene early in Wayne’s World in which Wayne, Garth, and a back seat full of friends are driving through Aurora in Garth’s ’76 Pacer. “Bohemian Rhapsody” comes on the radio and the sheer joy that they have in singing along with the song is not just contagious – but a moment that most people experienced as teenagers or college students, riding with our friends in our own crappy cars, hearing that song that we loved. What was for most people a transient moment on the way to the cares of adulthood is a way of life for Wayne and Garth. In other words, there’s something kind of life affirming about watching these dopes have such a good time without any of the trappings of success.

The trappings of success are represented by television producer Benjamin Oliver (Rob Lowe), in Lowe’s oily jerk mode (see also, Tommy Boy). He offers Wayne and Garth untold riches ($10,000) to purchase the rights to their show, and Wayne is temporary blinded by the money – not Garth, though, who sees more clearly but lacks the courage to really speak his mind. Tia Carrere shows up as Wayne’s love interest, the lead singer of a band named Crucial Taunt. And ultimately Wayne and Garth have to regain control of their show for the happy ending the movie needs. It comes, of course.

There’s an extended joke about artists selling out to advertising sponsors, for instance, and a recurring bit about Wayne’s ex-girlfriend (Laura Flynn Boyle) who refuses to accept that she’s an ex. When she insists on giving Wayne an anniversary gift he looks warily at the package and says, “If it’s a severed head I’m going to be very upset .” And who could not enjoy seeing Alice Cooper instruct Wayne on the history of Milwaukee?

Prior to directing Wayne’s World, Spheeris was best known for directing a documentary tryptic on the underground music culture in L.A. (The Decline of Western Civilization).  Spheeris isn’t proud of Wayne’s World:  she says she sold out in making it and that it never should have been released.  It’s too bad that she feels that way, really, since the movie offers a mixture of humor, anarchy, and observations about the American value system that many of those underground musicians would have sympathized with.

This is not a profound movie, but it made me happy. Sweet, socially awkward Garth and Wayne, with his almost Zen-like ability to be present, may be temporarily sucked in by dreams of bigger things, but ultimately they join Dorothy in affirming that your heart’s desire is to be found in your own backyard. Or as Garth says, “Sometimes I wish I could go where no man has gone before….but I’ll probably stay in Aurora.” 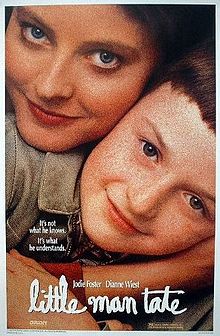 This was Foster’s first directing gig, and she starred, too, as the single mother of a young boy (Adam Hann-Byrd) who turns out to be a genius. Foster, having been a precocious child star, may know a thing or two about what it’s like for children with preturnaturally adult minds.  Fred is neither an adorable show pony or a freak:  he’s a an extraordinary child, but still a child.  His mother, Dede, wants to protect his spirit.  As a former child genius and educator, Dianne Weist wants to nurture his gifts.  The movie draws too stark a contrast between these two women’s views, but it’s still a smart, controlled, unsentimental directorial debut.