Plenty Of Shades Of Grey In This French Gender Drama 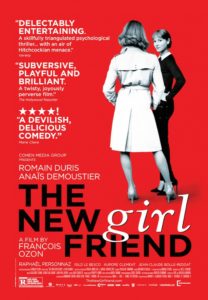 It’s tempting to approach a film such as The New Girlfriend by way of undressing its flair for “preversity”. Likewise, it’s tempting to look at its director, the crackerjack French auteur François Ozon (8 Women, In The House) as an artist who’s out to scandelize. For well over a decade, Ozon has earned a reputation as a provocatuer of darkly honest sexuality. His environments are scerene and lush, the characters recognizably human. There’s a movie-movie sheen radiating from the worlds of the twists, turns, reveals, and bare nature that mark his filmography. Based on a book by recently deceased crime novelist Ruth Rendell, The New Girlfriend evidences aspirations to top all previous entries.

Anaïs Demoustier is Claire, a woman reeling from the death of her lifelong friend and confidant, Laura (Isild Le Besco, holding her breath splendidly as the corpse). Claire and Laura gravitated from best playmates to teenage lovers before marrying different men in adulthood. Laura’s death has left her husband, David (Romain Duris) alone to raise their baby daughter, Lucie. Claire, being Lucie’s godmother, drops by one day to lend a hand only to accidentally walk in on David, holding the baby while dressed in complete drag.

From this moment on, The New Girlfriend becomes about David’s emergance as a bona-fide crossdresser. Claire, who initially sees this behavior as a jarring preversion, comes around to sypathizing with David, who adopts the name Virginia when in drag. As played both eerily and cannily by Duris, who is said to be quite the sexy male heart-throb overseas, Viriginia is not a bad looking woman at all. As the pair spend more and more “quality girl time” together, something is awakened in Claire… Their relationship complicates considerably from there.

Ozon’s cinema is one of sexual intrique and human imperfection. Subtlty reigns, as does the freedom of leaving certain aspects unexplained.

Case in point, the head-scratching final shots of his erotic/murder film Swimming Pool (2003) continue to be debated to this day. His oblique nature is not unearned (if in fact such a thing must be earned), as Ozon’s autuer-touch owes much to both Alfred Hitchcock and Rainer Werner Fassbinder. Like those directors, it’s not hard to deduce a certain pleasure taken from the exploration and even momentary exploitation of what might be considered by many (Claire included) to be human preversion. 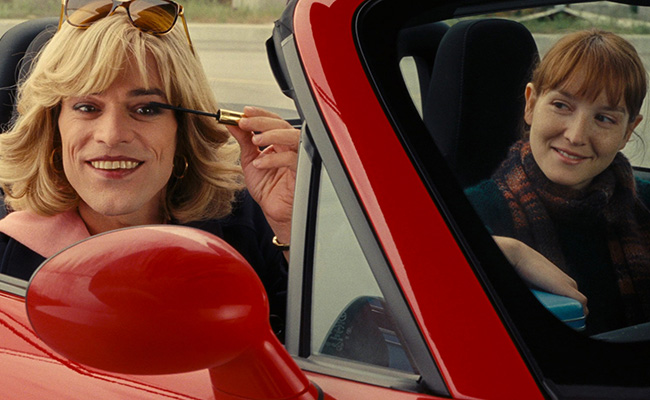 Romain Duris and Anaïs Demoustier in THE NEW GIRLFRIEND.

In any case, it’s clear that Ozon knows movies, and knows their mechanics. If the oft-spouted academic theories of the male-gaze driven cinema are at all accurate, then the opening minute of Ozon’s previous film, the unapologetically sexual Young & Beautiful, manages to encapsulate the entire psychology of filmmaking to one shot. That said, such moves are the height of subversion in the hands of Ozon. Meanwhile, Young & Beautiful, a troubling film in which a well-off teenage girl opts to become a prostitute just for the thrill of it proved to be too much of a hot potato for U.S. art houses, making only a few film festival appearances. The New Girlfriend, having avoided any such blattant lightning rod, needn’t suffer such a fate. Not that it too isn’t troubling in other ways…

In this current moment of having culturally rounded the hills of marriage equality and Caitlyn Jenner, it makes certain sense that the prudish United States might be ready for a film like The New Girlfriend.

The film takes great pleasure in asking how our clothes, our appearance, our entire demeanor play into our sexuality. How do they play into our innermost sense of self? Is sexual preference something that can be freely adorned, disrobed and set aside for another day, another lover? How fluid is gender, anyway? Through the casting of a particularly emfeminate Romain Duris in the male lead, and the undeniably boyish Anaïs Demoustier as the lead female, Ozon turns the tables on multiple levels in terms of what audiences expect from such characters in terms of gender casting. Not even the characters themselves are immune to such off-kilter expectations. They may inhabit a movie-movie setting, but with their very senses of self rapidly unravelling, all bastions of self-control, sanctity of marriage, and trust are challenged. It’s hard to watch at times, but Ozon keeps it authentic, if conflicted. 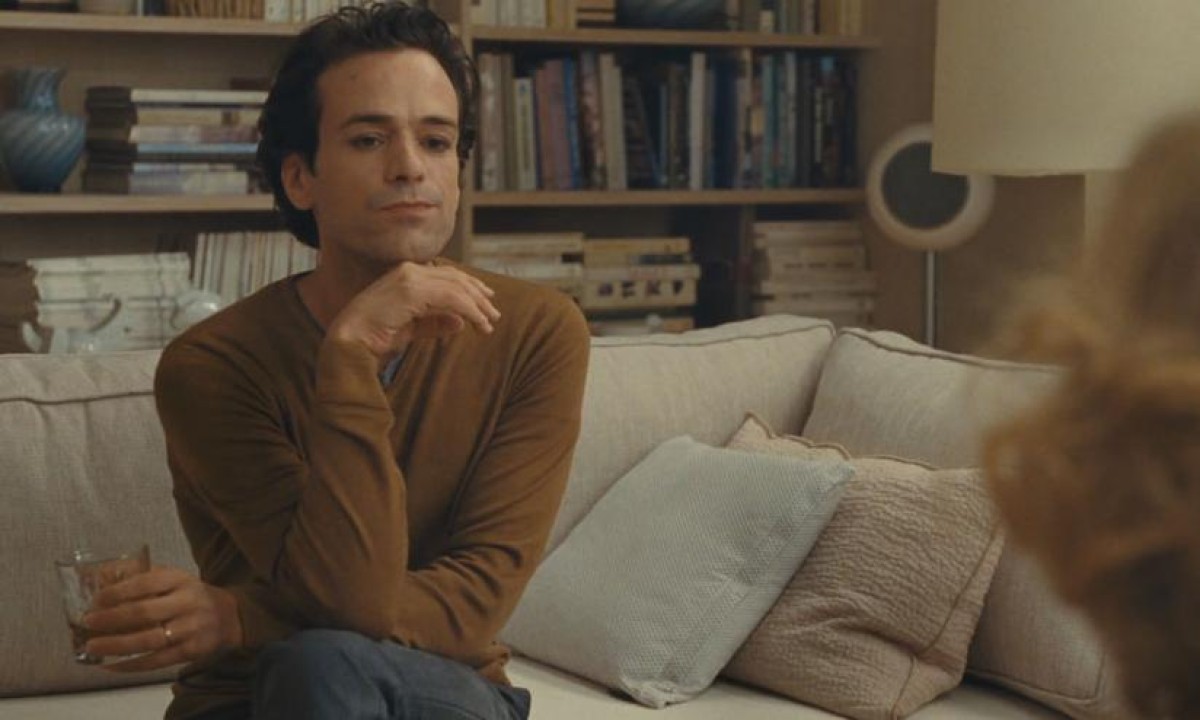 There are moments of The New Girlfriend in which a viewer could forget that it is not a thriller. At no point in this film is Ozon interested in murder or even violence (deviating from his source material in that regard). The treachery felt in this film is an altogether different type, one of spousal and confidant trust. As the film slow-burns its way into its moral labyrinth (all the while back-burnering it to focus on David’s transformation to Virginia), its uneasy effect is felt all the more deeply for its more universal nature. Whoever we are in terms of sexual identity, it still hurts to lie and be lied to by those closest to us.

Ozon, in this sense, has made a deeply unsettling character study utilizing still-questioned social behaviors.

Mainly, this partains to men dressing as women in public, and the women who love them. Yes, Ed Wood lectured us years and years ago in his Worst Film Ever Made, Glen or Glenda? that a tranvestite is not necessarily gay, but obviously it still hasn’t sunk in, whether with contemporary audiences or the characters on screen. Ozon seems intent on picking up Wood’s slack on this topic, and extending it to a consideration of anyone who is living a personal life outside of “the norm”. While some would consider such a thing confrontational, any quest to humanize outsiders cannot be a bad thing.

But amid all of the deliberate challenging and subversion inherent to the story, there very much also seems to be an intentional aim of normalizing such off-the-beaten-path sexual preferences and behaviors. This collison of Ozon’s queasiness-inducing indulgence and his apparent goal in presenting a new “normal” is where the film is at odds with itself. Although never uninteresting as a story, and not poorly made or acted in any respect, The New Girlfriend might be too socially ambitious, a bit of a miss at its very core. Or, maybe it’s Ozon seeking to leave viewers to stew in their own unease, and to then ask why. He first cultivates such unease, then makes us complicit in it.

Couple its resolute negative tension, wherever its source, with poor handed-off baby Lucie, and we’re left with an intesting but oddly repulsive experience. The child, like her dead mother Laura, are mere plot motivators. Is anyone involved in this film on a creative level an actual parent? I’d frankly be surprised…

With the faux-empowering bore of Fifty Shades of Grey gobbling up all kinds of attention earlier this year, François Ozon has now given us a film that sets out to be truly progressive, and truly off-putting, broadening its own shades well beyond grey, and into a bright primary pallate that Fassbinder would’ve approved of. The New Girlfriend might be a bit off, but it’s not for lack of ambition and talent. 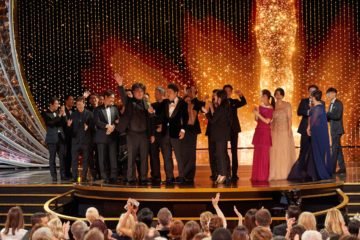 7 Ways to Make the Public Care About the Oscars Again 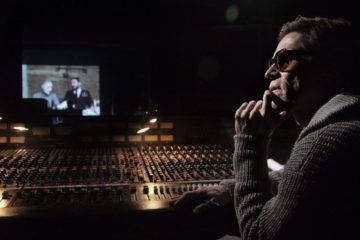