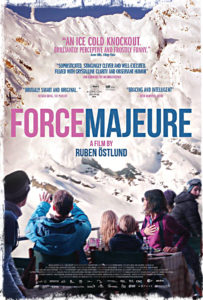 We are most truly ourselves when we’re caught in an unguarded moment.  Tomas and Ebba (Johannes Kuhnke, Lisa Loven Kongsli) are an attractive middle class Swedish couple, on a ski vacation in the Alps with their two children, Vera and Harry (Clara and Vincent Wettergren).  The early scenes of Force Majeure portray the easy companionship of a happily settled marriage – teasing, gentle affection, the ordinary intimacy of family life.  After their first of five days of skiing the the entire family is curled up in bed sleeping.  It’s an idyllic scene.  Unfortunately, what happens on day two will put an end to that comfortable closeness.

Eating lunch on an outside terrace, Tomas and Ebba see a “controlled” avalanche that soon seems to be rushing straight toward them.  In the panic of other guests screaming and fleeing the terrace, Ebba grabs the children.  Tomas, on the other hand, grabs his iphone and runs.  It’s the unguarded moment that will set the direction for the rest of the vacation, and perhaps for their marriage.

Ostlund has a keen eye for the way that spouses communicate both warmth and anger through the smallest gestures and expressions, and also knows how attuned children are to such things.  Vera and Harry deteriorate emotionally right along with their parents, despite attempts to shield the children from what’s happening. 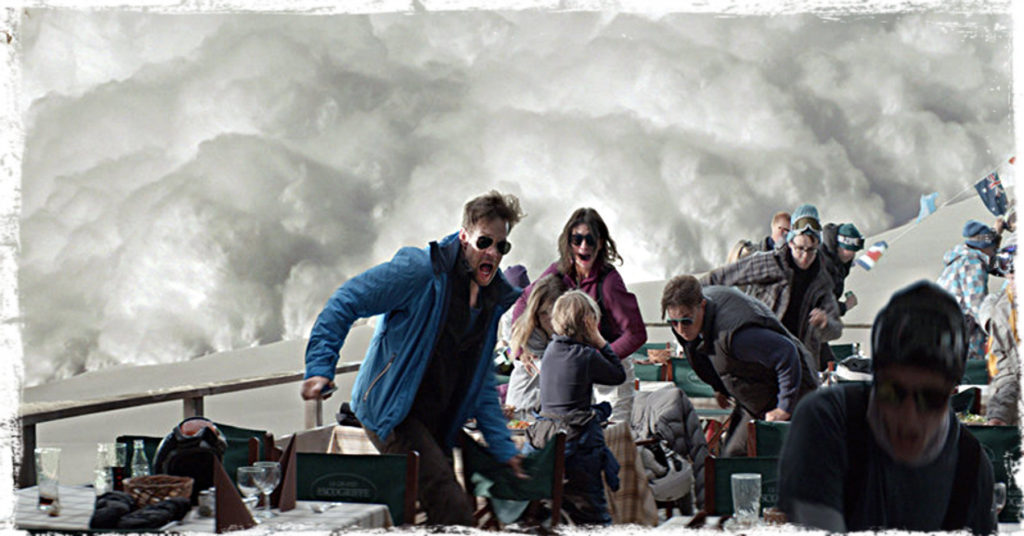 Force Majeure, directed by Ruben Östlund, is simply the best movie about marriage in years.  In a moment of crisis Tomas was tried and found wanting, but far more about this couple is revealed as a result.  Ebba seems ready to forgive Tomas, if only  he will admit what has happened.  For  much of the movie he will not, and as tension mounts both husband and wife seem to be seeing each other for the first time.  Ebba becomes more brittle and disapproving, her mouth drawn into a tight line.  Tomas looks ever more ragged and doughy in the face of his wife’s disappointment.  Ostlund has a keen eye for the way that spouses communicate both warmth and anger through the smallest gestures and expressions, and also knows how attuned children are to such things.  Vera and Harry deteriorate emotionally right along with their parents, despite attempts to shield the children from what’s happening.

There is a lot going on thematically in Force Majeure, particularly in its examination of gender roles in marriage.  Tomas and Ebba may be a modern and enlightened couple, but they are both struggling with perceptions of masculinity.   Did Tomas simply have a failure of courage on that terrace, or was something deeper about manhood revealed (as Ebba suspects), that Tomas’s natural “direction” is away from his family?  An old friend, Mats (Kristofer Hivju), and his young girlfriend, Fanny  (Fanni Metelius), are drawn into the argument, with Fanny suggesting that Mats would have behaved just as Tomas did in a crisis.  Mats angrily declares that he has always protected  his family and cared for them “very, very well.”  Fanny punctures that statement by pointing out that Mats’s children are living far away with an ex-wife while Mats is vacationing with a 20-year-old. 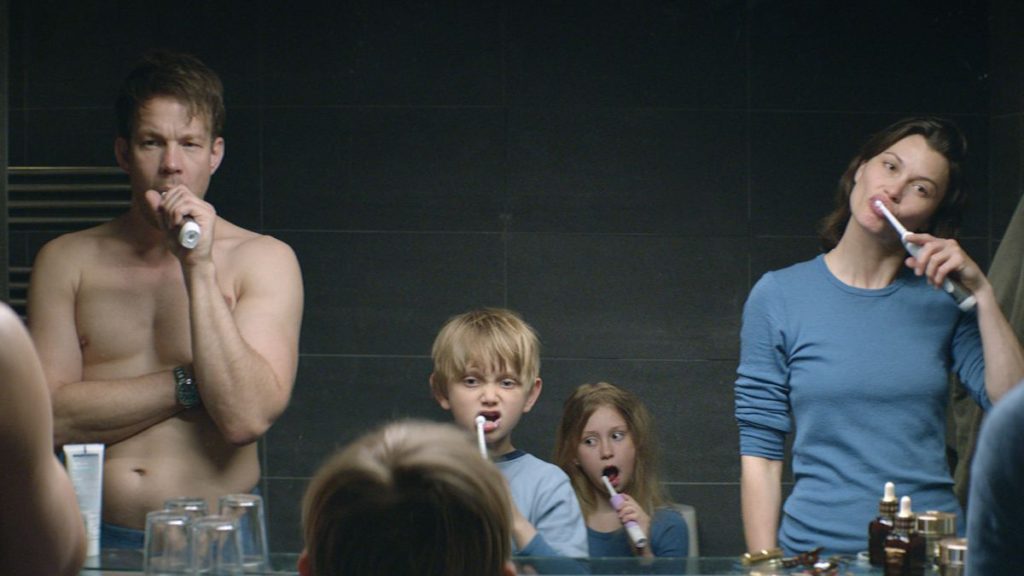 Such biting humor is on display often in Force Majeure.  it’s an uncomfortable comedy, or a drama in which the absurdity of human behavior is allowed to draw painful laughs.  There is no clear “bad guy” in the story, despite how badly things start for Tomas.  Through a series of reversals there are opportunities for everyone to fail and for everyone to be redeemed.

Through beautiful sweeping shots of the Alps and a repeated musical theme from Vivaldi’s “The Four Seasons” Ostlund skillfully gives an operatic (if ironic) tone to the story of one marriage, one family, under duress.  They may seem like just another entitled, affluent couple from the outside (as they do through the eyes of a hotel janitor whose contempt seems to grow though out the film) but their small story is the whole world for Tomas and Ebba.  Can they continue to love each other, now that the worst has been revealed?  It’s the question that must be asked and answered in every marriage eventually, even without the avalanche.