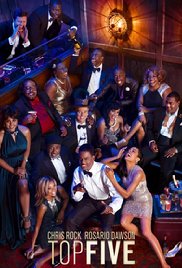 Jim Tudor:  If the Internet has taught us anything, it’s that everything is made more interesting when ranked on a list. Want your soulful reflection on old school country music legends to get more hits? Break it up into individual profiled singers, and rank them. Wanna talk about the most family friendly laundromats in Delaware? Figure out which is best, call it Number One, then bury it in a clickable gallery after laundromats #2 – #5. Want your thoughtful film review to have a shot at truly reaching the masses? Concoct a transparent methodology for turning it into some sort of list.

After all, it’s true that lists garner far better readership online than standard articles. At least, that’s what I’m told. So, without further ado and no small degree of shamelessness, Erik Yates and I give you:

5. CHRIS ROCK GETS IT. Comedian Chris Rock demonstrates an understanding of this sort of chronic watering down of media culture in his new film Top Five, which he wrote, directed, and stars in. His various swipes at everything from reality TV to modern standup comedy to celebrity fixation may not be exactly center stage, but they are there.

In the movie, Rock is essentially playing a version of himself – a famous sharp-tongued comedian who’s had great success as a personality, but has stalled out when it comes to making movies. He’s spoken recently about the gapping dichotomy between the toothlessness of his film work, including his own directorial efforts Head of State (2003) and I Think I Love My Wife (2007), and the no-holds-bite of his standup. Top Five is both his confessional and remedy. In a sense, it’s his All That Jazz, but not as good and less musical. The welcome through-line is Ben Vereen, who appears in both films.

It’s the eve of his much-ballyhooed wedding to a no-talent reality TV diva. His being interviewed by an intrepid reporter for the New York Times (Rosario Dawson) unfolds into a wild night of running around New York City mixed with introspection and crude shenanigans. All too often, the latter element stalls out the latter, but Top Five continues to be entertaining sometimes in spite of itself. If this haphazard journey through night clubs, restaurants and strip clubs is meant to be indicative of the junk culture we currently collectively consider entertainment, it’s an awful subtle point; one that more greatly resembles Rock navel gazing and hanging out with his famous friends. But there’s no denying there’s a viable wit somewhere at the center of Top Five.

Chris Rock at a club in TOP FIVE.

Erik Yates:  I really think this notion of a “Top 5” list for Top Five just smacks of gimmick. It will also somehow cause the reader to place a level of importance to each number causing them to get violently angry if our #1 doesn’t match their #1, etc. But as to your first point, I agree that this is more Chris Rock’s life-imitating art-imitating life and the subtle points are not at all lost.

“Top Five” definitely meanders as we spend a day in the life with Chris Rock and Rosario Dawson, but it meanders with friends along for the ride.

4. THIS IS CHRIS ROCK’S RETURN TO RELEVANCE.  With all of the “Top 5” lists discussed throughout the film (“Top 5” Rappers, “Top 5 comedians”, etc.), there is a subtle homage paid to people like Bill Cosby (Best Storyteller—-current events weren’t revealed when the film was made), Eddie Murphy, Richard Pryor, etc. With Murphy you see a similar career path of hard-edged comic to SNL funnyman to comedic films with big box office to soft kiddie-fare much like the character of “Hammy” a bear-cop that Rock’s character plays in his fictional films within the film. Here, Rock is able to return to a harder-edge that played well in his own stand-up act that may have been muted over the years with the films you mentioned, as well as things like the Grown-Ups series with Adam Sandler. This is Rock returning to things like Eddie Murphy’s Raw and re-establishing his base again. As you mentioned….it’s both a confessional and a remedy. Eddie Murphy would be wise to watch Top Five and learn its lessons for his own career path. This film allows Rock, and by extension his character, to play back to the humor that people love from him as well as handle a dramatic role that perhaps hasn’t really been showcased in his films since his role as a junkie in New Jack City back in 1991. 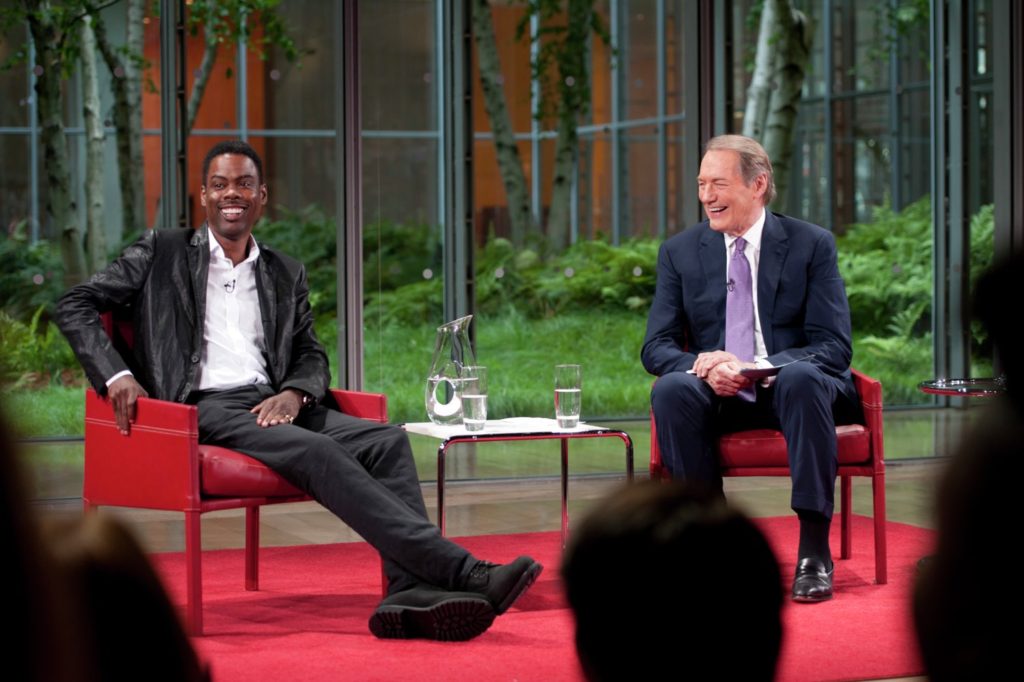 Chris Rock on TV with Charlie Rose in TOP FIVE.

Jim Tudor:  Gimmick?? Why I never. Just for that, I’m taking both slots #3 AND #2! None of this even-steven ping-ponging anymore! I realize that leaves you the coveted #1 slot to do with as you please, but like you said, it also opens you up to all that violent anger if you get it wrong. The pressure’s on, my friend!!

3. BUT THE MOVIE MEANDERS, MAN. Yes, Top Five meanders. It meanders all over town. I suppose that’s by design. After all, Chris Rock is actually pretty well studied in cinema. This is the guy who made a Hollywood rom-com out of an Eric Rohmer film! (I Think I Love My Wife is a remake of Chloe in the Afternoon.) But nevertheless, I found my attention drifting in the middle.

Rosario Dawson is at her best as the reporter tethered to Rock’s character. And to the film’s credit, she’s a female lead with a degree complexity and more to do than fall in love with the guy. Dawson’s character is a young mom with all manner of past trouble, not all of which has been completely laid to rest. She has all the dignity and poise that the rest of the world surrounding Rock lacks.

Which brings me to

2. “HAMMY THE BEAR”?!? REALLY??  I know the character that Rock’s fictional version of himself is famous for playing is intended to be hokey and stupid. But honestly, a box office-smashing film franchise starring a trash-talking comedian in a cheap full body bear suit, firing machine guns?? No. Not even in our Transformers dominated blockbuster landscape does this seem plausible as THAT big of a hit, particular for third film of such a thing. (In Top Five, we see a loud and chaotic clip from Hammy the Bear 3.) It’s indicative of the problem that Hollywood tends to not know how to mock itself without venturing so far into unrecognizable territory that the bite is lost. And for a film project that’s all about Chris Rock getting his bite back, this vital flourish to the story is an annoying wrong turn. In Top Five, there’s too much trash culture gone trashy.

And with that, I give the floor to you, Erik. Take it home! 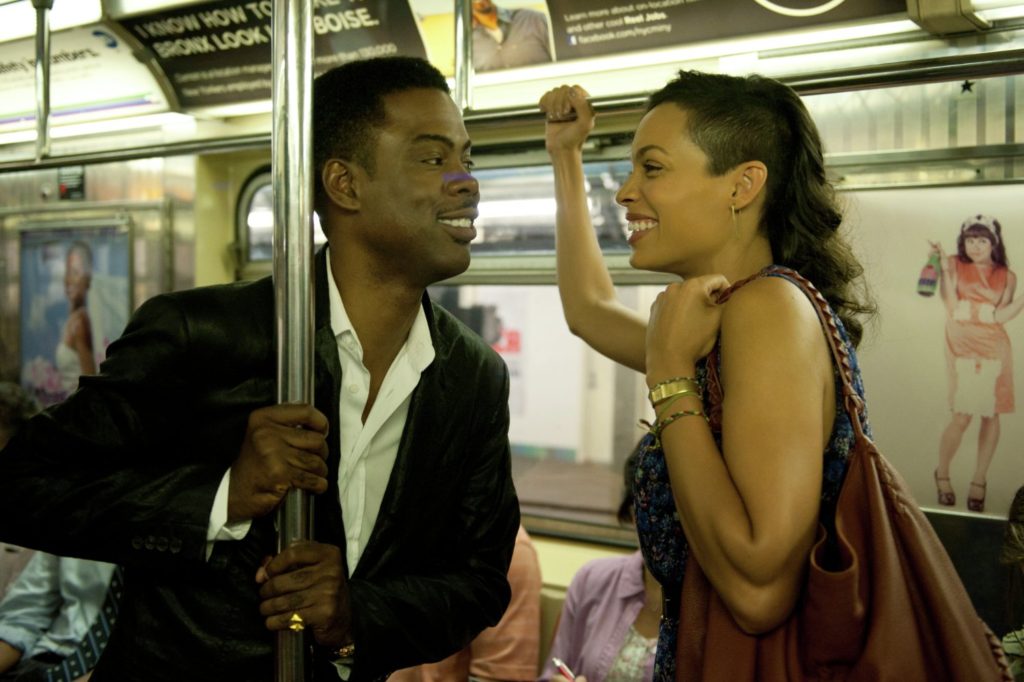 Chris Rock and Rosario Dawson cutting up in TOP FIVE.

Erik Yates:  Well, thanks for setting me up for failure. The number one slot is the most judged spot of any respectable Top 5 list, and now its up to me. The gimmick is almost over….

1. CHRIS ROCK GIVES BACK TO THE COMMUNITY.  While this film is firmly set in a fictionalized world based on Rock’s real-life story, Chris recognizes that comedians belong to a larger fraternity. It is a family of sorts. Anyone who begins to take themselves too seriously need only step back on the stage and allow their fellow friends and family bring them back to reality.

In the film, Chris’ character, Andre, begins to rediscover his gift and passion, but only as he returns home, away from the cameras of Hollywood, to the people who truly know him best. This film is surrounded by a cast of friends from Chris’ real life including the likes of J.B. Smooth, Romany Malco, Kevin Hart, Cedric the Entertainer, Whoopi Goldberg, Jerry Seinfeld, and SNL pal Adam Sandler. This is also Tracy Morgan’s last on screen appearance before his devastating car crash. Rock allows each of them to shine in key scenes creating an intimacy that makes this fictional story more familiar and realistic.

Top Five definitely meanders as we spend a day in the life with Chris Rock and Rosario Dawson, but it meanders with friends along for the ride. In spite of some of the extremely raunchy nature of the humor and situations, or the absurd nature of characters like Hammy the Bear, Top Five is Chris Rock trying to get us to take him seriously, and have fun. That is a lot more than I can say about this review and its obvious ploy to inform and entertain with a hokey “Top 5” list about Top Five, but that’s what you get when you concoct a goofy method to review a film to reach more viewers. Let’s see if it worked!