Does This Film Find the Strike Zone? 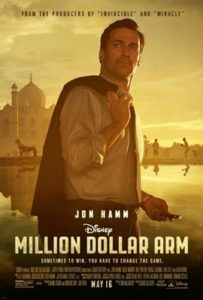 Jon Hamm (Mad Men‘s Don Draper) plays sports agent, J.B. Bernstein, who along with his partner Aash (Aasif Mandvi), are struggling to keep their agency open.  Having lost out on an important contract with a bona fide NFL star, J.B. is looking for a new angle that will bring his company the money they need to keep their entrepreneurial dream alive.

In between watching the Susan Boyle episode of Britain’s Got Talent and a cricket match, J.B. hatches a brilliant plan: find a way to convert Cricket players who use an arm motion to “bowl” that is adaptable to a baseball pitcher’s throwing motion, and discover them via an auditioning contest much like Britain’s Got Talent, American Idol, etc.  Finding an investor to fund the contest, J.B. is able to sell this as a way to help Major League Baseball crack the potentially lucrative Indian market of 1.3 Billion people that could serve as a marketing boom much like Yao Ming was for the NBA’s outreach to China.  The question is, what kind of untapped talent can be found in India?

The cast is surprising strong for this film.  Alan Arkin (Argo, Little Miss Sunshine) is hilarious as usual playing an aloof and aging baseball scout who assists J.B. Bernstein in traveling across India looking for 2 potential pitching prospects.  Bill Paxton is also very strong and subtle in his portrayal of USC baseball coach, Tom House.  Despite this nuanced performance, I still wish he would have broken into his Aliens character, Pvt. Hudson, and started shouting “game over, man!” but alas, this is a feel-good drama that is based on a true story, and so there would be none of that in this this film. (How funny would it have been though?).

Lake Bell is able to both lighten the mood consistently on screen, as well as serve as the catalyst for much of the personal growth that is experienced  by both Jon Hamm’s Bernstein, as well as the Indian athletes as well.  Following last year’s …In a World (where I was fortunate enough to meet her at a Q&A), along with this film, I hope that she continues to grace the screen for years to come.

After searching across the whole country, J.B. is able to discover two possible candidates to bring back to the United States to train for a tryout with a MLB team. The two winners of the contest, Million Dollar Arm, are Rinku (Suraj Sharma from the amazing film Life of Pi) and Dinesh (Madhur Mittal from Slumdog Millionare).  Both are from small towns without much experience outside their village.  They are shown to have good hearts that serve as a contrast to the worldly and cynical Bernstein.  Pitobash plays Amit, who serves as translator for the two prospects.  Amit is used as comic relief and has some great moments as he embodies the optimistic and encouraging spirit that is required to face the pressure that both Rinku and Dinesh are under.  The Indian culture is treated with lots of respect in Million Dollar Arm that elevates it from the stereotypical call center image American audiences might have and demonstrates how similar we are truly despite the differences in culture.  The film also demonstrates those as well.

Million Dollar Arm is able to be a really good film that entertains and encourages its audience by simply showing a true story of two people trying to succeed in life.  It is the rare film that hits so many of the variables that films strive for but are often unable to realize.  It is a film that is suitable for the whole family (mostly), without catering to the younger demographic.  It also is centered around a sport that has enthusiasts at ever age bracket meaning it should find mass appeal in each age group.  It speaks to universal themes such as having big dreams, being an outcast and wanting to fit in, not knowing one’s place in the world, and more.

While this is a serious story, there is a great balance of comedy throughout.  The cast is very strong, and by utilizing so much talent from India, this is a film that could achieve the aims of the contest Million Dollar Arm itself, namely opening up India’s emerging movie market.  With Bollywood already so prominent and with the success of studio partnerships, and especially with films such as Slumdog Millionare, Million Dollar Arm might have strong international appeal despite it being based on an American sport. 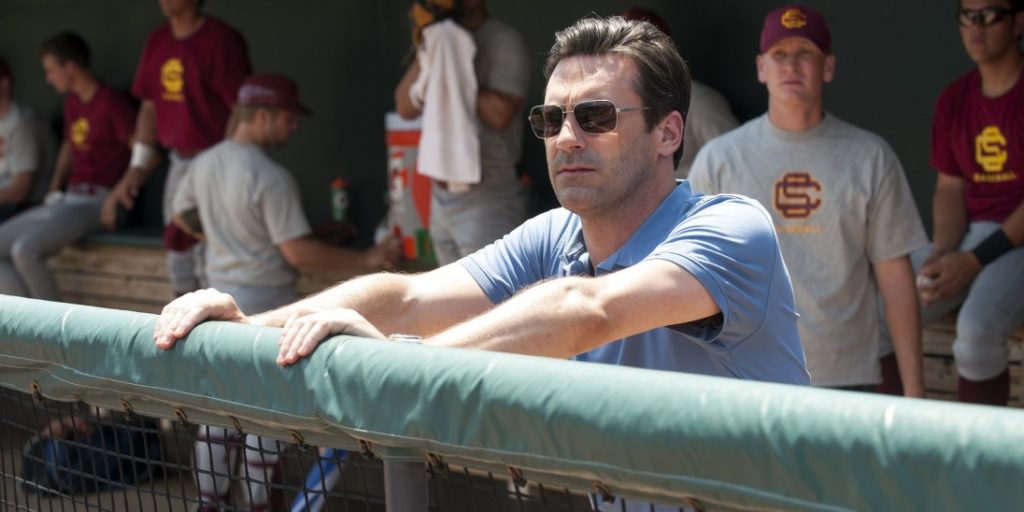 Jon Hamm for his part is able to play a much softer version of his character Don Draper and a much more sympathetic protagonist than his darker antagonistic role in Bridesmaids.  While it didn’t show his acting range, it is a great role to introduce him to a bigger cross-section of fans than he’ll find with Mad Men.

Million Dollar Arm is a grounded, and uplifting tale that will cause you to feel really good upon exiting the theater.  Do stay around through the first part of the credits to get some great shots of the real Rinku and Dinesh and their fate following the events portrayed in the film.  It is by no means a great movie, but it is a solidly good one that accomplishes every aim it has: to entertain.