Will Draft This Movie on Your 2014 Fantasy Film Roster? 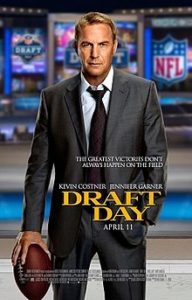 The Cleveland Browns hold the first pick in the 2014 NFL Draft, and they are on the clock.

For those following this year’s NFL draft, don’t be alarmed that I mentioned the Cleveland Browns as the first pick in the 2014 Draft.  As of this writing, my hometown Houston Texans are still contemplating what they are going to do with the first pick.  The draft I refer to in the opening line is the starting point for the new film Draft Day.  And in this film, and fantasy scenario, Cleveland is on the clock.

Cleveland’s owner, Anthony Molina (Frank Langella) is looking to make a huge splash in this year’s  NFL Draft that will win over an angry fan base and also secure the franchise’s long-term future.  He believes the player that fits the bill is Quarterback Bo Callahan (Josh Pence).  He lets his general manager, Sonny Weaver Jr. (Kevin Costner) know, in no uncertain terms, what will happen if he fails to secure this deal.

Weaver, however is already on the hot seat in Cleveland after making a splash of his own by firing the franchise’s storied coach, and Weaver’s own father, Sonny Weaver, Sr.  To complicate matters worse, the hall-of-fame caliber coach has recently passed away, putting pressure on Weaver to attend to his own loss and family affairs in the middle of the most pressured event for a general manager, who is responsible for putting a winning product on the football field.  Throw in a complicated work relationship, a new coach who is not on the same page philosophically with his general manager, and combine it with the normal time-crunched, politic-laden, back-door dealing, schmoozefest that is the NFL Draft, with all of the media’s story lines buzzing over the airwaves, internet, and print journalism, and you have Draft Day.

Kevin Costner is no stranger to sports films having etched out an impressive career of films with sports-related themes.

For Baseball: Field of Dreams, Bull Durham, and For the Love of the Game

and now….we have his entry for football.

Kevin Costner is apparently ready to work.  Possibly known as the actor most likely to star in a film pushing 3 hours runtime (see Dances with Wolves, The Postman, and The Hatfield & McCoys mini-series for a start), we would usually only see Mr. Costner in a film every year or two.  After appearing in 2013’s Man of Steel, Kevin Costner is debuting his third film of 2014 in only the first 4 months of the year.  Having already appeared in Jack Ryan: Shadow Recruit, and 3 Days to Kill, Mr. Costner has 2 more films in post-production slated for a 2014 release, according to IMDB.

At the helm of this sports-based drama is Ivan Reitman, who is known for producing and/or directing some of the great classic comedies of the last 40 years, such as Animal House, Ghostbusters, Stripes, Dave, and three Arnold Schwarzenneger comedies: Twins, Kindergarten Cop, and Junior. His last directing effort was 2011’s No Strings Attached starring Ashton Kutcher and Natalie Portman.

Ivan Reitman is able to successfully balance most of the potential hazards that exist in a movie such as this. On one hand this film is timed and tailor-made for what is growing to be one of the most watched off-season sporting event in the world: the NFL Draft.  Fueling Fantasy Football Leagues all across the country, this event has taken on more prominence the last decade.  With the real draft only a few short weeks away, this film could get the party started early. And while this movie will logically appeal to the gigantic demographic of football fans, the potential hazard is alienating those who are not fans of the game. This film is able to reach beyond its football theme and engage those with no knowledge of the game, even labeling which city, team, and stadium you are at in terms of setting though out the picture.

Another hazard of a film like this is putting the characters into a timed pressure cooker of a situation (with an actual draft clock appearing and ticking down on screen at times when appropriate), and not draining the audience with the pressure the protagonist feels.  Reitman is able to bring out some good comedic moments that seem, for the most part, appropriate to the personality of the characters on the screen, and not as some ploy to simply lighten the mood before jumping back into the proverbial fire.

There is also a possible hazard in simply loading a film like this down with dozens of cameos of NFL, sports, and media personalities to please the fan base of the sport.  Here they are actually creating a realistic world for the actual personalities to inhabit to bring believability to the fictitious plot you are trying to convey.  Reitman and his writers, newcomers Scott Rothman and Rajiv Joseph, wisely choose to use fictional athletes as the main objects of desire for all of the NFL teams in the draft so as not to date the film by tying it to certain personalities of the current day that may fade tomorrow.  However, they pepper enough celebrity athletes and sportscasters into the film to at least bring it credibility for today’s audience.

Costner seems to find great success playing characters who have found themselves down on their luck and in need of some sort of redemption.  Each of his sport-based films have carried this theme in some way or another, and Draft Day is no different.  He is a calming presence throughout the film, despite the flurry of activity and pitfalls surrounding him on screen, and his likable charm continues to exude the comfortability we have grown to have with him with each new film of his career.  There is a quiet strength in the sports personalities he portrays, and you can expect more of the same in Draft Day.

Jennifer Garner, as Ali, is a great pick for the female lead in a football film where she is expected to balance lots of roles simultaneously. She must balance being beautiful enough to serve as the love interest of the film, but also be strong, confident, and tough enough to get things done as one of a very few women working as an executive for the Cleveland Browns office which is primarily occupied by men.

Also making great additions to the cast is Denis Leary as the new coach battling Costner in the draft room, Ellen Burstyn as Weaver’s mother, and Chadwick Boseman (who starred as Jackie Robinson in last year’s 42) as a potential draft pick.

One might easily seek to cast this movie as sappy or shallow, but in the end it is exactly what it means to be.  It is a drama/comedy about one man trying to find some redemption and make sense of the chaos of his life while in the midst of the storm.  Even though it has the flash and feel of an ESPN segment (with actual ESPN personalities on hand to guide you through the film) and a giant NFL commercial complete with 32 teams of product placement, it is a fun ride.

Draft Day gives us a good glimpse of the politicking that truly goes on behind the scenes at an event, such as the NFL draft, and helps provide some scaling of how truly monstrous the NFL Draft is. It also seeks, with varying success, to get beyond the hype of the NFL circus and show us the real people seeking to have their dreams fulfilled by being drafted by an NFL team. And while this film will most likely not make the top rounds of your eventual 2014 Fantasy Film Roster, it is a fun and entertaining film that takes place in the world of NFL Football but reaches out beyond that narrow demographic to simply appeal to a mass audience as a film about life.