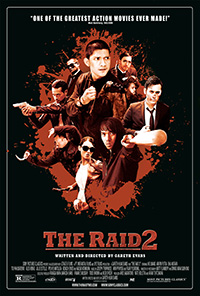 2011’s The Raid was a lean 101 minutes, of which a good 75-90 minutes worth was just straight-up, non-stop, balls-to-the-wall-to-wall frenetic action.  The story set up was minimal; the plot exceedingly simple.  Establish the characters; establish the stakes—wham, bam, thank you ma’am—now let’s catapult a refrigerator across the screen.

2014’s The Raid 2:  Berandal probably has a comparable amount of action to the first movie, but this time it’s interwoven together with another hour’s worth of epic crime story, with dozens of different players.  It’s a completely different animal than the first movie—think something more akin to The Godfather with bone-crunching martial arts.

Interestingly enough, Berandal was written first, and was initially meant to be shot first.  Writer-director Gareth Evans was unable to secure funding for the epic story he wanted to tell at the time, and so he made the scaled down Raid:  Redemption as a prequel-of-sorts to the events of Berandal, so that the success of that movie would enable him to make the movie he really wanted to make—in other words, Berandal represents the true artistic vision of the filmmaker in a way that the first film only hints at.

And it shows.  Berandal is an engaging and thrilling story of subterfuge, loyalty and betrayal, crime and punishment, and complicated family dynamics, set against the backdrop of a developing crime war in the Jakarta underworld.

Fans of the original will be happy to know that the dynamic, over-the-top action hasn’t gone anywhere—in fact, if anything, “Berandal” ups the ante by several degrees, featuring a larger variety of action set pieces, including not one, but two hammer fights to rival the one in Park Chan-Wook’s “Oldboy”, and a car chase to equal any car chase I’ve ever seen put on film.

Those who are looking for more of the same may be disappointed that they have to wait between ten and thirty minutes between these breathtaking action sequences, but I couldn’t disagree more—the non-stop pace of the original dulled my senses somewhat and turned into a blur in my memory.  But every set piece in Berandal stands out in recollection, precisely because you get dramatic breaks in-between the action—furthermore, this gives the action scenes even greater meaning and higher stakes, meaning that every flying foot, broken limb, slicing blade and whizzing bullet carries more narrative weight and meaning beyond simply “looking cool.”

While I found The Raid to be a little overwhelming and exhausting, Berandal is engaging and involving, and a superior sequel all around.  Redemption may have been the first born, but it’s clear now that Gareth Evans always wanted a Berandal.