Wes Anderson Is Checking In For Perhaps His Grandest Outing Yet 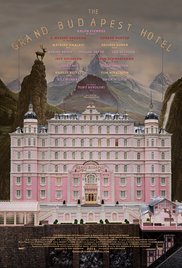 Jim Tudor:  Wes Anderson is checking in.  The divisive filmmaker’s got all the usual baggage, but this time its bigger and there’s more of it.  The trip he’s on, however, is a bit different.  Lots of new and familiar faces, but more than ever, its the scenery that really matters.  This may not be his most resonant outing, but he’s determined for it to be his grandest.

The Grand Budapest Hotel may be Anderson (The Royal Tenenbaums, Moonrise Kingdom) at his most stylistically indulgent yet, which is truly saying something.  Immediately following the film, I correctly guessed that there would be reviewers claiming that it is his best film.  What I didn’t foresee was that some of those voices would be among Anderson’s most vocal critics.  Owen Gleiberman of Entertainment Weekly seems almost relieved that Anderson has seen fit to finally stop trying to humanize his characters, opting instead to follow a perceived (and heretofore compromised) will to focus fully upon his uniquely ironic yesteryear aesthetic of dogeared blended with intentional staginess.  And man, does he ever go that route.  Although The Grand Budapest Hotel has the honor of featuring the biggest and most “Wes Anderson-esque” cast to date, there’s something brazen about the fact that they all play second fiddle to thrift store wardrobes, exotic set dressing, and lots of glossy primary colored paint-jobs.  As a longtime fan, I must admit disappointment – even as I laughed all the way. 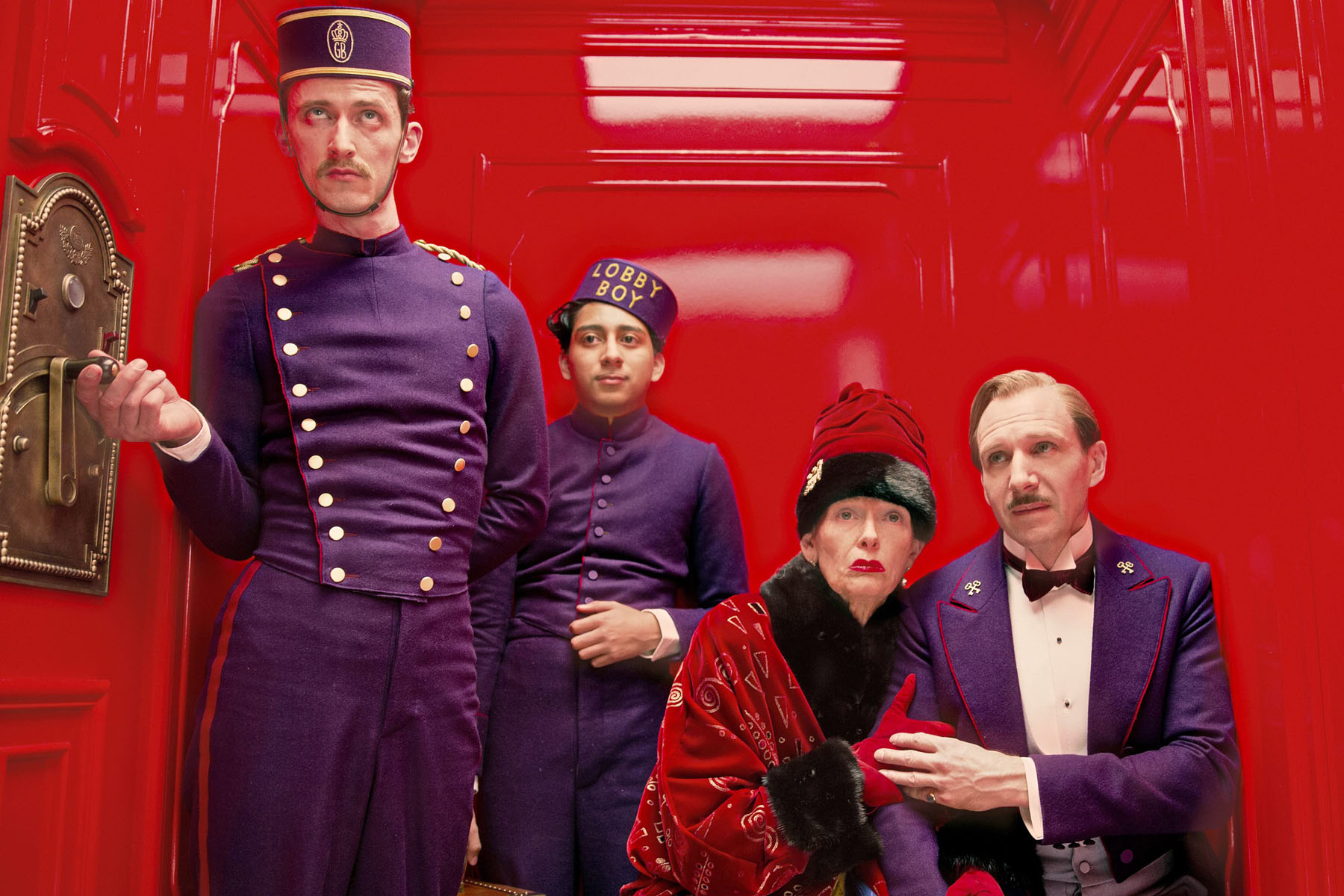 Erik Yates: I’m curious about your disappointment, but I have a different reaction.  The Grand Budapest Hotel is certainly Anderson’s most indulgent film, but it is also the one that works best at every level.  Even non-Anderson fans will find this film engaging visually, but also from a storytelling aspect.  This is the most accessible that a Wes Anderson film has ever been yet it still maintains the elements that make his films uniquely his.

The cast, as you mentioned Jim, is stacked with the usual suspects such as Owen Wilson, Bill Murray, and Edward Norton.  Ralph Fiennes absolutely steals the show as hotel concierge M. Gustave.  This is his best performance since Schindler’s List, and possibly his most comedic.  Being known more for playing a Nazi, Voldemort in the Harry Potter series, and most recently appearing in the latest James Bond film, Skyfall, it seems that he is actually a natural at comedy as well.

While “The Grand Budapest Hotel” is clearly a comedy, it is balanced with moments of action, suspense, and surprisingly some rather grotesque moments that might catch you off guard.  I feel that this film flowed in between these stylistic endeavors with great ease coming off as one cohesive whole that is uniquely Anderson despite it being more mainstream than his previous efforts.

The hotel itself is a character unto itself, and it is impressive to see the stunning visuals of this film as well as the enormous scope of the aesthetics it entails as you consider that this film was made on a budget that is less than many independent films operate on.  All of the money is clearly on the screen and invested in the all-star cast. 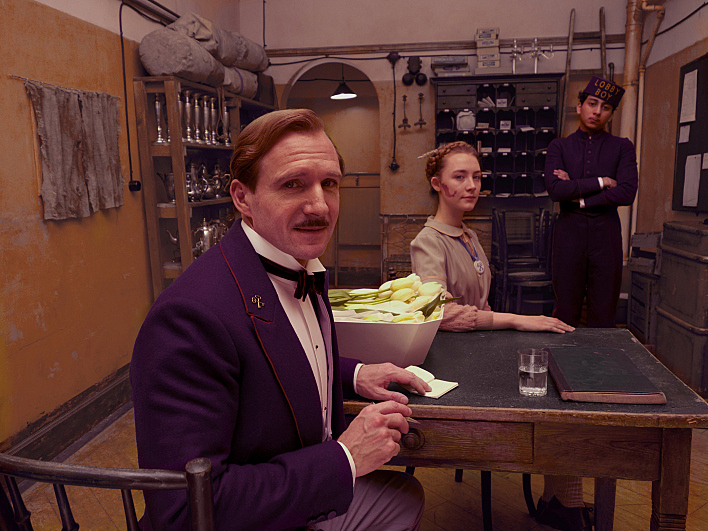 Jim Tudor:  And to boot, I bet a lot of those stars didn’t take home all that much money for their involvement.  Like Woody Allen before him, Anderson is acquiring that reputation of a niche filmmaker who does what he does, and when he calls, you answer.  But Anderson, like the Coen Brothers, is also a bit of a quiet film history buff, always covertly nodding to the medium’s rich history from within his own thick stylistic veneer.  In this case, I believe Anderson was interested in making his own star-filled 1950/60’s-esque hollow-spectacle mega-production.  It’s all bells and whistles, and they never stop getting rang and blown.  There’s Ralph Fiennes and F. Murray Abraham and Adrian Brody and Willem Dafoe and Jeff Goldblum and Harvey Keitel and Jude Law and Bill Murray and Edward Norton and Saorise Ronan and Jason Schwartzman and Tilda Swinton and Lea Seydoux and Tom Wilkinson and on and on.  It’s a ton of colorful fun, but I can’t say that Fiennes’ Gustave, while admittedly ranking as one of Anderson’s most unforgettable characters, ever had the gravitas or even humanity of Max from Rushmore, Royal Tenenbaum, Mr. Fox, or anyone in Moonrise Kingdom, which for me was/is his best and most definitive film.  Not that I think he was ever necessarily supposed to. 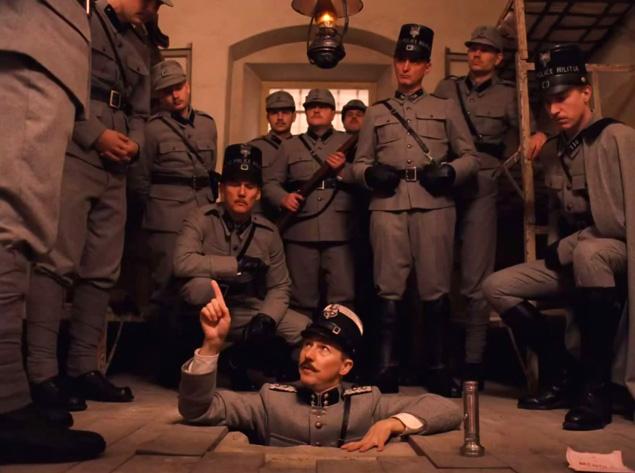 Anderson is perhaps currently the foremost director who is regularly accused of crafting style over substance.  It’s a very easy and surface accusation when it comes to his work, which has actually been rife with repetitive themes (family dysfunction, child/adult dynamics, inner melancholy, etc.) which have been well serviced by his tremendously distinct visual and writing styles.  In the best cases, his trademark style bleeds directly into the theme, intermingling with it irrevocably.  Hence, in a case like Moonrise Kingdom, which hilariously and movingly detailed an unlikely childhood romance between a couple of runaways while the adults in charge of them and their peers crumbled behaviorally, the dusty off-kilter antiquity of it all melded with that aged storybook quality he routinely goes for.  That was also his first film to consciously take place in a specifically detailed past time period, as opposed to just dressing up contemporary times as the past.

The Grand Budapest Hotel follows suit, jumping from three distinct eras of the 20th century, even as it lands in wonderfully made up countries on the brink of war, complete with phoney Nazis, ala the Marx Brothers’ Duck Soup.  It freely embraces the visual artifice of something like The Fantastic Mr. Fox or the animated elements of The Life Aquatic in a greatly effective way, pushing those “fake” elements into “text”.  The film’s central chase sequence, for example, is clearly us watching the director play with toys and models on screen.  The fact that the actors interchange freely with the toys and models is just part of it.  Where most filmmakers go out of their way to hide the seams between such artifice and “reality”, Anderson amps it up, especially in this movie.  First and foremost, it’s him going bonkers with style and technique, and that’s fine.  It’s actually really, really funny.  I merely feel that it’s second tier Wes Anderson, that’s all. 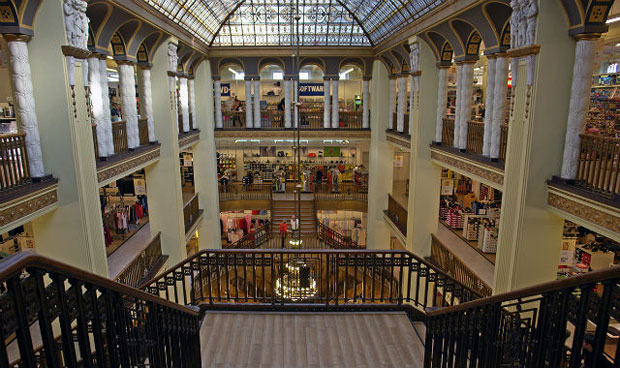 Erik Yates: I think the audience is really going to break one way or another based on what you just described.  Some Anderson aficionados will have their favorites and may view this as second tier as you state, while others may nominate this as Anderson’s crowning achievement as some of the critics you mentioned are already doing.  While I love Moonrise Kingdom for the reasons you discussed, I still think that this is the most accessible of all of his films and will allow for a whole new audience to enjoy his films alongside long time admirers of his work.

And whether The Grand Budapest Hotel ends up as your favorite Wes Anderson film, or if it pales in comparison to one you embrace more, one thing is not in doubt: You will laugh and be transported to a world of “pure imagination” (to borrow from Willy Wonka’s 1971 hit song), that only the creativity and grandeur of Wes Anderson could fill.  The Grand Budapest Hotel is open for business, and hopefully you’ll check in.