Reel Theology: THE PURGE And The Human Condition

Does the Latest Thriller Have Something to Say About our Basic Humanity and Morality?

Note: The following article looks at the movie The Purge in order to address some larger spiritual and theological issues.  It will discuss points that are seen on the trailer for the film, but will not delve into any spoilers beyond what the trailer shows. 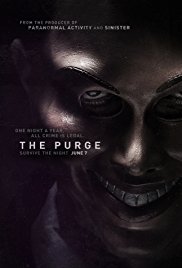 I’d like to welcome you to our first article of a new column called “Reel Theology”.  Through this column, we hope to look at theological, spiritual, and moral narratives that are found all throughout film. Today we are looking at the movie The Purge, and how it deals with the subject of morality.

In the film, once a year, in the New United States of America, citizens are encouraged to participate in a 12 hour event called The Purge.  During this time, crime, including murder, is legal.  The Purge has been embraced with the explanation that it allows everyone a natural release from the build up of impulses that, left unchecked, would lead to an increase of crime.

The Sandin family is a rich, affluent family who has everything it seems, at least on the outside. James Sandin (Ethan Hawke) is the top salesman for a security company responsible for selling security systems designed to keep people safely locked in their homes during the purge.  When his son lets a homeless man into their home during the purge, in order to protect him from being murdered, the family is faced with a grave choice: either turn the man over to the mob who is outside demanding their right to purge their murderous desires by killing the man, or allow the man sanctuary which would result in all of their deaths.  The rest of the film is the decision that is made and the ramifications of that decision.

The movie’s entire premise is that we are nothing but animals and that we need a release from the natural instincts dwelling within us. These may include the desire to be jealous, to bring about our own justice, to release some steam, or to destroy, hurt, or kill those whom we think deserve it.  The Purge is our country’s way of allowing us to have that release, in order to ensure that during the other days of the year, we hold ourselves together, and go against our true destructive nature.

Scripture describes the human condition in a similar way.  Jeremiah 17:9 describes the human heart as corrupt, deceitful and wicked.  Romans 3:23 says that all of mankind has sinned and fallen short of God’s glory.  In other words, we are incapable of rising to such a standard.  Romans 3:10backs it up stating that there is none that is righteous, even those in “good” standing with God, have no goodness within them.

And so The Purge presents us with a picture of our depravity.  Allowing such mayhem and violence during this event only, so that we can assuage our guilt of our common human condition and so we can live with ourselves under the delusion of a humanistic worldview that says people are basically decent.  Even Anne Frank is said to have affirmed this basic notion as she looked into the evil of the Nazi’s holocaust. But is this true?

Adults have a way of justifying their actions.  So often we convince ourselves that that end justifies the means.  And so we have no problem cheating in school, at our jobs, or just telling white lies.  After all, if I tell “them” the truth, it will just make them feel bad!  We live in a delusion of our own design.  We know how to make every situation “grey” in the moments when it really is black and white.

In film, one of the best ways to see a moral dilemma from a pure heart, verses a clouded view that I’ve described, is to see how the child characters respond.  More often than not, they will be the moral compass of a situation.  Sure, many of the reasons for conflict in films like this are the result of children not listening to their parents, but that proves the earlier truth that we are not basically good.  Even a child messes up.  But they usually aren’t clouded by ambiguity and see things simply. Despite doing wrong actions in a film, children usually see right and wrong more clearly.

In The Purge, it is a child’s action of letting a homeless man into their protected home, to escape his  death, that sets up the conflict.  But is the child’s ability to see that something about this event is not right, and that we don’t have to give in to our animal instincts, that drives the larger questions.  There is a higher morality than what the culture at large is espousing. Maybe that includes protecting our fellow man.

God is not mentioned at all in The Purge, but the notion of what is right and wrong is.  And apart from a higher standard, a greater power, a loftier notion than everyone’s individual view of what is right or wrong for them, what really allows us to determine right from wrong?  My “right” might be a lot of people’s “wrongs”.  And it can’t be as simple as letting culture at large choose right and wrong based on the times we are living in.  That kind of thinking gave us slavery, the holocaust, war, and human trafficking, to name a few.

Many political points are made in The Purge as well, such as the income gap between the rich and the poor, and the emphasis we put on our own security.  We are willing to sell our souls sometimes to feel safe, even if danger is within our own home.  But even in the midst of the political angle (which is covered in more detail in Dave Henry’s review of The Purge here at Zekefilm), it exposes this same underlying concept that we aren’t the masters of our own destiny.  We really control nothing, and even our view of right and wrong, safety and danger, and situational ethics is still subject to a standard that is beyond us.  Something we all fall short of.  Something Romans 3:23 was alluding to.

In the scriptures, the depravity of mankind is shown to be a very present reality.  It is not just a societal norm for a group of people who lived a long time ago.  It is about the human condition.  The same condition that is in our DNA, today.  In the scriptures, nations enslaved others, raped and pillaged, and subjugated entire groups of people either through taxation, or through brutality.  Individuals murdered, stole, lusted, coveted, and even became vigilantes, in order to exercise what they believed to be fair justice for a crime. Scripture doesn’t put on rose colored glasses and try to describe an utopia.  It paints a picture that is just as real today as it was when it was written.  That picture is that the human heart is wicked at its core. 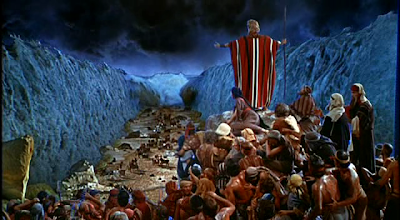 Yet despite this reality, there was always another narrative flowing through the scriptures.  One that said there was a better path.  A “way” that led to freedom.  This language is all over the story of the Exodus.  The path from slavery to freedom for the ancient Israelites who went from Egypt to the Promised Land, has been called “The Way”.  Jesus even picked up on this Exodus language when he said in John 14:6, “I am THE WAY (emphasis mine), the truth, and the life”.  He was in fact claiming to be the path that leads from slavery (real, metaphorical, etc.) to freedom. This was how the messiah was pictured in Isaiah and other books of Hebrew prophesy.  This Messiah would be a path to freedom that would usurp and supplant all human governments and seats of power.  Our type of kingdoms are brutal and oppressive, but a Kingdom established amongst us, by God, would be perfect and would never end.  Jesus was seen as this Messiah by many, and is it any coincedence that King Herod sought to stamp out this Messiah to keep his power, by instituting a “purge” of his own, targeting for death every male aged 2 and under (Matthew 2:16-18).

While we might dismiss this all as simply a claim that Christians use to recruit people to be Jesus followers, it underlines a very important point.  The point is that even 2,000 years ago, people identified with the notion that we are all enslaved to one thing or another and have a yearning towards this notion of freedom, and true life. We also see that those in power will seek to institute any means necessary to keep themselves in power, even a purge.

In The Purge, this yearning towards freedom is acknowledged by Charlie Sandlin (Max Burkholder), the young son who sees that this whole event of purging is wrong.  In fact, you get the sense, when looking at it from his eyes, that this so called event that ensures greater “freedom” every other day of the year, is in fact slavery, and a type of slavery that one needs deliverance from.  The people around him are not happy, even with the Purge.  It is from this realization of our common bondage, that the journey of asking “what is right, and what is wrong” can begin from.  And once you start this journey, you are acknowledging that the answer lies beyond anything we have decided in our own worldview or construct that begins and ends with us.  It must be beyond. And so we make our choices, hoping that we will be more free through these decisions.

The scriptures, in Matthew 18:3, paint a picture that it is childlike faith that leads one to truly see the truth and enter the Kingdom of God which is true freedom. Charlie Sandlin, was able to rise above the morality of the culture around him, in the film, so as to dare question why there was an event called The Purge. It felt like bondage to him, even behind the safe curtain of his security system, and he wanted true freedom. This stood in sharp contrast with the crowd I was watching this film with, who, at one point, began a ritualistic chant in the theater, made up of over 30 voices who simultaneously were chanting “Kill THEM!” towards the screen. (In case you were wondering, the actors couldn’t hear them).

At this point, the film was no longer a cathartic experience for the audience, watching a film that let them fantasize about making things “right” in their world by destroying those they think deserve it.  Instead, the film became a mirror of the human condition that resides in all of us. It demonstrates we are all fallen individuals, justifying our means with whatever noble attachment we give to the ends we are pursuing.

At some point, we need to ask ourselves if it’s right to allow ourselves those moments, and opportunities, to purge our animalistic desires, or if there is a morality above ourselves and our culture that points to a better way.  A better path, that allows us to escape the slavery and prison we all find ourselves in, and instead pursue the freedom that we all long for.  The film points to this possibility, and no further.  The scriptures point to a person, who claims to be that path to freedom.

So will we purge our demons through our own sense of morality, or will we seek the greater path that calls the whole culture into question, and dares to ask if there is a better way?