From the infamous Cannon Films and blasting like a loud, scattershot fireworks display over the then-quickly emerging field of holiday-centric slasher cheapies is 1980’s New Year’s Evil.  With a title like that, one wouldn’t be out of line to expect a party.  Oh, it’s a party alright.

With midnight fast approaching in terms of exploitable holidays for horror movies (thanks, Halloween), Cannon co-owners, cousins, and sometimes-producers Menahem Golan and Yoram Globus opted to ring in January 1st with screams!  New Year’s Evil is a little different from its contemporary blood feasts insofar as there’s a stricter method to the madness, and the characters aren’t teenagers.  The one guy who is supposedly that young, our heroine’s son, doesn’t look a day under twenty.  (Movie teenagers.  Whatayawant??)

Still, it’s a bad, bad night for punk/new wave TV host Diane “Blaze” Sullivan (played by the actress behind Happy Days’ Carol “Pinky” Tuscadero, Roz “Roz” Kelly).  Some freaky jerk with a voice altering thingamajig keeps calling into her live New Year’s special threatening to murder people.  Every hour on the hour, as the calendar flips time zone by time zone, he’ll be killing a “naughty girl” until finally, he’ll kill Diane.  Well geez.  Diane is unnerved by this, but not unnerved enough to stop her studio-bound broadcast celebration.  How else would popular band Shadow get to play their happenin’ hit “New Year’s Evil” over and over again on TV?

The killer (Kip Niven), perhaps inspired by Shadow’s rockin’ earworm, opts to call himself “Evil”.  (So that when he reveals his identity, he can say, “You see, I’m Evil!”).  Taking something of a cue from the killer photographer in Michael Powell’s Peeping Tom, Evil records his victims in their death throes.  That way, when he calls in to harass Diane on the air, he can play back the audio to demonstrate that he’s not goofing around.  Gruesome.

All the while, Diane’s handsome actor of a son, the tuxedoed Derek, can’t seem to get her attention.  Grant Cramer plays Derek with the character’s fragile heart firmly on his sleeves.  Cramer would later score bigger roles in Hardbodies (1984) and Killer Klowns from Outer Space (1988) before no doubt realizing that not every movie role would net so many bikinis or klowning.  In New Year’s Evil, he stands out for coming across as legitimately more unhinged than the killer.  When a horror movie feels the need to immediately follow a scene of stabbing with a moment of a teenager despondent from parental neglect stretching his mother’s nylons over his head, it’s got an imbalance.  As the ineffectual police detectives (with their elbow-padded sports jackets and uncombed hair) move into the studio to get a bead on Evil, the greater terror seems to lie with this dapper young Norman Bates wannabe hanging around in the hotel room.  Sure your mother doesn’t love you as much as she loves her career, son, but is that any reason to ruin her pantyhose?

For viewers looking for a good-time flick from back when the slasher sub-genre was still new and fresh and el cheapo, it’s hard to miss with New Year’s Evil.  A fine film it is not, but it is a nice glimpse into a direction early ‘80s horror could’ve gone, had horny teenagers not become the dominant presence/audience.  Director Emmett Alston has made a slasher film that is almost weirdly grown-up centric.  There are parts that feel more like a stabby domestic drama.  New Year’s Evil, though, unlike a lot of its horror contemporaries or, for that matter, many New Year’s Eve TV specials, isn’t boring.

Although none of the bonus features on KL Studio Classics’ fresh issuing of New Year’s Evil seem to be new, the disc does tout a very nice brand new 2K master and newly commissioned original by Vince Evans.  The new art adorned the disc’s slipcover, although the case insert is reversible, should the collector want variation.  Ported over from Scream Factory’s out of print 2015 Blu-ray is the featurette The Making of New Year’s Evil.  This unexpectedly dry piece has interviews with cinematographer Thomas Ackerman and actors Kip Niven, Grant Cramer and Taaffe O’Connell.

The commentary track is also vintage, as it features the film’s director Emmett Alston interacting with the questionable questions of Code Red’s Bill “Banana Man” Olsen.  While the track may not provide the usual observations and insights of most commentaries, it’s an amusing listen for how the two men interact.  As they watch the film together, Olsen exhausts Alston with questions such as, “Where’d you shoot this?”, or “That guitar play bobbing back and forth like that on the monitor in the background- y’see that guy?  Who’s idea was it for him to be doing that?  Did you tell him to do bob around like that?”.  To these inquiries Alston typically responds, “I don’t remember”.  There’s also the film’s theatrical trailer.

New Year’s Evil has its red herrings, but also reveals the identity of the murderer quite early.  It’s helpings of blood and nudity are typical of this stage of the slasher game, which is to say, not all that much of either.  The direction is no great shakes and the aesthetics are strictly no-frills- both of which contribute to the movie’s unintended appeal of entirely unnecessary bygone nonsense.  Yet, somehow, Cannon imbued this city-set horror caper with more production value and scope than is displayed by, say, Halloween or Friday the 13th.  The movie’s no masterpiece, but it can be a lot of fun.  It must be said that KL’s take on New Year’s Evil doesn’t drop the ball. 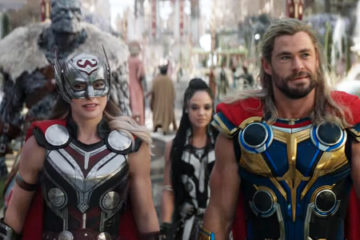