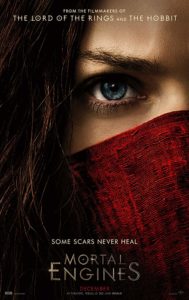 I usually try to open with a plot summary, a question, a quote, a Hollywood trend, perhaps a personal anecdote. But with Mortal Engines, what’s the point? I’ve already written this review—several times this year. In some ways—mostly the innovative visuals—Mortal Engines is unlike any movie I’ve seen before. But in so many more ways, it’s like many, many movies I’ve seen before.

What the trailers tried their best to hide is that this is another dystopian future dependent on a teenager with a special quality to save the world. Katniss Tris Thomas Hester (Hera Hilmar) is the orphaned teen with the key this time, and she lives in a world with cities on wheels as their claim to fame. Because apocalypse. And while watching a bricolage London roll over the horizon like an ATV thrills for a scene or two, it’s not long before you realize this movie is a one-trick horseless carriage.

To their credit, my impressions from the advertising were an accurate sell, which is to say I thought the film looked like an expensive mess. Early trailers used a different logo and promised “an epic new saga” from the minds behind The Lord of the Rings (“Peter Jackson presents!”). The rebrand kept the Jackson connection, but with only one mentionable star (Hugo Weaving) and unfamiliar source material, it couldn’t find much else to separate Engines from a fleet of holiday releases. Now I know why.

Continuity is…optional? Character motivation is…inferred? Dialogue is…a waste of time? Every fifth line was redundant to something on screen (a character shouting, “That was close!” after a near-miss with a spear) or mythological mumbo jumbo derivative of the last dystopian YA adaptation you watched. When you don’t need 20 percent of your dialogue but still find time for fugacious subplots, no steampunk airplane has wingspan wide enough for your story to take flight.

Maybe because I just wrote a review of a film with enchanting visuals that was bogged down with mythic plotplotplot, or maybe because I wrote one this spring about a movie dependent on your affinity for previous genre entries, or maybe even because I wrote another this year for a predictable franchise chapter, I’m already running out of concrete details worth mentioning. I could discuss the lifelike performance Jihae wrenches out of her hackneyed lines, but she’s the only one in the cast who manages. I could pay tribute to the impressive attention to detail in the costuming and imagined machinery, but there’s no substance to back up their style. (Hey, another one!) I could even muse upon whether a story like this would be better as a TV mini-series with time to develop the characters and the setting, but I don’t think I’d watch it. With a world watered down from Mad Max and more convoluted than Divergent, Mortal Engines never gets its motor running.