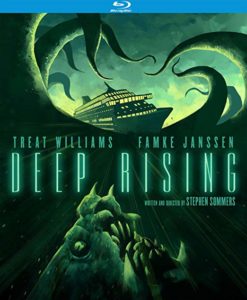 In early 1998, in the shadow of James Cameron’s Titanic, another film featuring disaster on an ocean liner was released in theaters to a largely indifferent public. Deep Rising was marketed as a horror film, but it’s actually more of an action comedy…with monsters. Writer/Director Stephen Sommers was just a few years away from striking box office gold with The Mummy, another action comedy with monsters that was far better received when it was released.

Starring Treat Williams in full-on Han Solo mode (Harrison Ford was even offered the part) as John Finnegan, a seaman for hire, currently working for a group of mercenaries led by a man named Hanover (Wes Studi). Hanover directs him to pilot his boat to the middle of nowhere to intercept a luxury cruise ship for reasons not divulged. Finnegan and his mechanic Joey (Kevin J. O’Connor) know that their new bosses aren’t to be trusted, but they live by a simple creed: “If the cash is there, then we do not care.”

There are a few clunky lines of dialogue that may make your eyes roll, but overall this is a clever film with a breezy attitude along the lines of Big Trouble in Little China.

When they get to the cruise ship, they eventually cross paths with Simon Canton (Anthony Heald), the creator of the ship, and the wonderfully named Trillian St. James (Famke Janssen, a few years before X-Men), a passenger with motives of her own. Things really go off of the rails when our band of merry mercenaries discover that the ship is almost entirely devoid of people. What happened to everyone?

Wes Studi is downright awesome as the gruff, gun-toting Hanover and it’s a kick seeing Djimon Hounsou as one of the mercenaries, just a few months after the release of Amistad. I found Kevin J. O’Connor’s character to be oftentimes more annoying than funny, but Treat Williams clearly understands the tone this movie is going for and nails his part flawlessly. Famke Janssen rounds out our trio of heroes. She has many of the film’s best lines and an easy rapport with Williams. When the film is over, you find yourself wishing they would have made sequels with Williams, O’Connor, and Janssen getting into further misadventures. There are a few clunky lines of dialogue that may make your eyes roll, but overall this is a clever film with a breezy attitude along the lines of Big Trouble in Little China. I can see why it’s grown into a cult classic over the years. It’s just a lot of fun.

CGI was still in its infancy in the late ‘90s, so the creatures and tentacles and half-digested humans were created using both computer generated imagery and practical effects from various SFX houses, including Dream Quest Images, Industrial Light and Magic, and even the legendary Rob Bottin. The results may look dated now, but were state of the art at the time.

The Kino Lorber Studio Classics Blu-ray contains an audio commentary by director Stephen Sommers and editor Bob Ducsay, during which we learn various tidbits of behind-the-scenes information, including the fact that the ocean liner was not CGI, but a gigantic model the size of a school bus. Sommers and Ducsay also mention that the film was originally supposed to start with a scene featuring the monster, but that plan was scrapped.

In addition to the commentary track, the Blu-ray is packed to the gills with special features, including interviews with Anthony Heald, Kevin J. O’Connor, and Wes Studi, an animated image gallery, four interviews with various VFX/Make Up artists, behind the scenes creature tests, a conversation with second unit director Dean Cundey, and director of photography Howard Atherton. Atherton may be my favorite interview, as he details the challenges that the production overcame during filming, always with a fond smile.

The newly commissioned cover art by Jacob Phillips for this KL Studio Classics Blu-ray release of Deep Rising is beautiful and far better than any previous poster art for the movie. The digital transfer looks great and Jerry Goldsmith’s score sounds crystal clear. If you’re a fan of tongue-in-cheek action films featuring monsters, you can’t go wrong with Deep Rising.

The images in this review are not representative of the actual Blu-ray’s image quality, but are included only to represent the film itself.