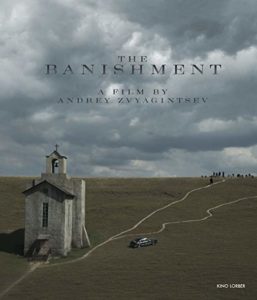 Weened in a culture wherein subjective processing of information is a survival instinct, it’s noteworthy that Andrey Zvyagintsev’s long-form Russian family life drama, The Banishment (Изгнание, Izgnanie), hinges wholly upon the fallout of communication failure between a husband and wife.  That this dread semi-allegory comes to us from the year 2007, signifying that less than zero lessons have been appropriated in terms of the the country’s political behavior, at home and abroad, renders this depressive film all the more upsetting.

But, broader spectrum politics isn’t what The Banishment is about.  As stated above, the film (Palme D’Or nominee and Cannes Best Actor winner) is about a married couple, Alex and Vera (Konstantin Lavronenko and Maria Bonnevie) having to grapple with each other’s manipulations and scorn that have developed over time.  Said to be a loose adaptation of The Laughing Matter, a 1953 novel by Armenian-American writer William Saroyan, Zvyagintsev has poured his all into this large scale tragedy.

…there’s plenty good about [The Banishment], though the greatness it reaches for remains just out of grasp.

There’s just something about a car going fast. Though a slow film, this is how The Banishment begins.  Cinema loves the urgency, the determination, of somebody just absolutely having to get somewhere.  As the windshield wipers scrape across the glass in the rain, they give off an involuntary little shriek, resembling a desperate gasp for life.  What, pray tell, is going on?  Off the beaten path, in an urban bit of Russian nowhere, out protagonist, the driver, is up to no good.  It’s a living… 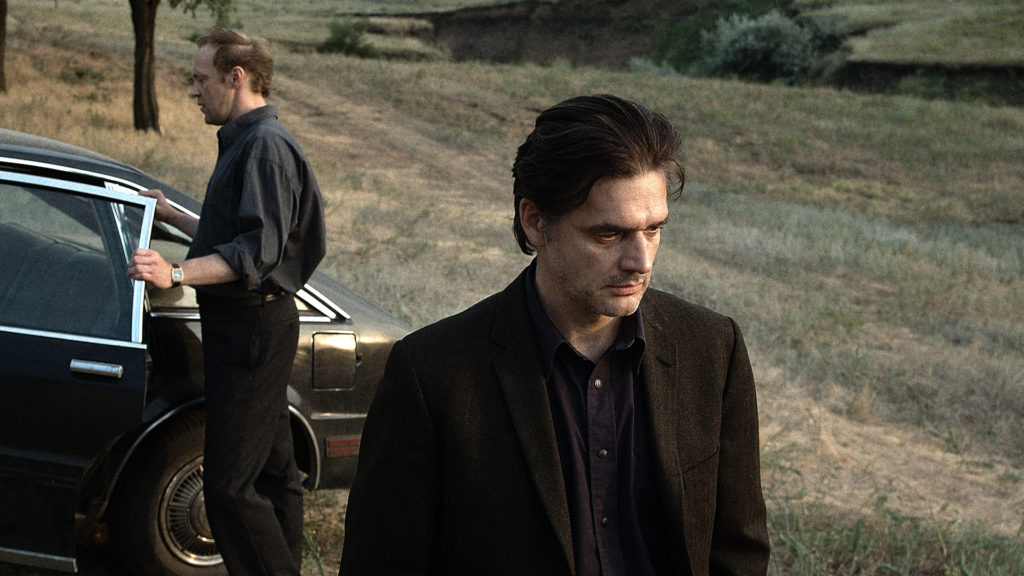 Konstantin Lavronenko in THE BANISHMENT.

With vocal cadence of a pierce Brosnan or Liam Neeson, lead actor  Lavronenko evocatively hails from the previous decade’s popular Chaz Palminteri/Gabriel Byrne mold of burning inner-torture and outer cool.  He wears his shirt tucked in, with the top button unbuttoned, and his sleeves rolled as tight as he is.  But, he still doesn’t know what to do.

Multiple times, almost every time, that his wife, Vera, addresses him, she’s pushing passed melancholy reluctance. There’s a breath of apprehensive silence, and then, strained and nearly whispered “Alex…”.  She almost can’t, literally nor figuratively.  One such time, practically unblinkingly, she utters the words that send this hardened man running through the trees:  “Alex… I’m expecting a child.  You are not the father.”

In despair, he calls his associate, Mark (a heart wrenching Aleksandr Baluev), agreeing to meet him at a bar in the city. There, they will engage their criminal minds to deal with this personal bombshell.  Instead, however, Alex jams on the brakes, makes a U-turn, and drives to a cliff.  His home is near this cliff – he’s gone back.  Later, when he does meet with Mark to confide his situation, Mark becomes blank and distant, telling Alex that if he decides to kill Vera, then that’s the right answer.  If he decides to forgive Vera, then that’s the right answer.  According to Mark, Alex cannot lose.  Later, though, it becomes apparent just how incorrect this advice is. 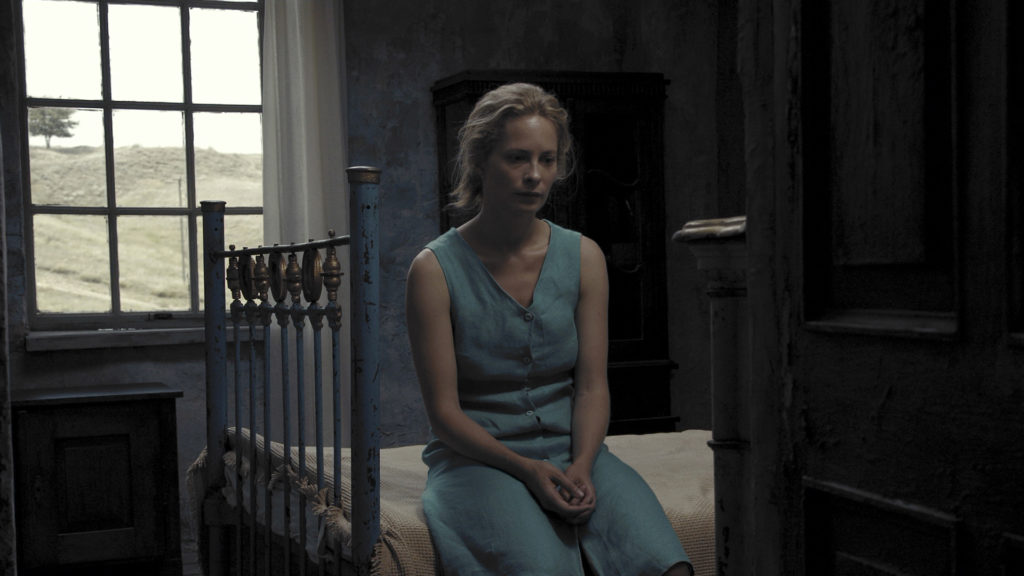 Maria Bonnevie in THE BANISHMENT.

The Banishment has tension, but not enough of a pulse.  As beautiful as it is, what with it’s decaying hillside environments and blue-pushed color timing, after a while one finds oneself more or less plowing through- not unlike the characters themselves.  This to say, there’s plenty good about it, though the greatness it reaches for remains just out of grasp.

At one point, there’s a prolonged shot of children working on a puzzle. It’s realized from overhead, so mostly, we’re seeing the puzzle. The puzzle image is fine art, of the Vermeer variety. The shot holds for a while. A kid shoves a piece into the wrong place, nonchalantly. The process goes on.

Meanwhile, the rest of the movie is just such a process, on the broader scale. Grown-ups trying to solve the puzzles of their lives. Life is beautiful, but what a challenge the puzzle can be.  And, wrong pieces do in fact get shoved into place from time to time, and everybody else goes about their business. Sometimes, the business is illicit.  It’s all a lingering sad state.  But some say the same is true of Russia. 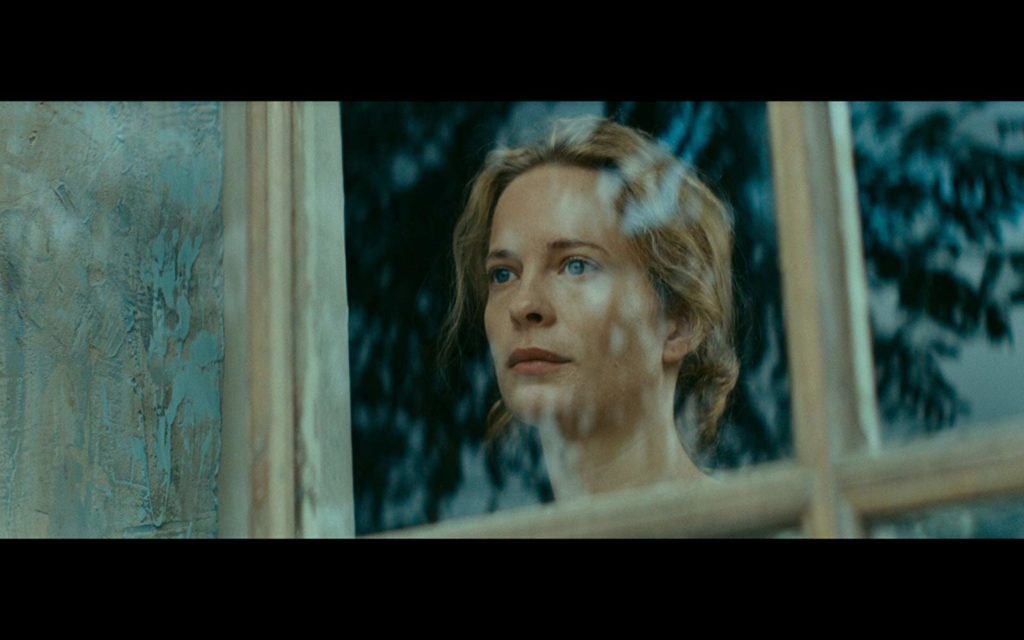 Kino Lorber’s Blu-ray of The Banishment is a handsome affair, boasting a striking transfer and fluid Russian-to-English subtitles.  Like the criminal life of our protagonist, it’s a movie that we get more caught up in than involved with.  There are two video supplements, each around twenty-plus minutes in length.  One is a decent little “behind the scenes” piece; the other is a newly recorded interview with director Zvyagintsev, wherein he expresses his surprise that Kino Lorber has activity pursued acquiring this film and his 2003 entry, The Return, for distribution to Western audiences.  He goes as far to advise watching The Banishment through a “metaphysical filter”, a viewing mindset he accesses to be a foreign mentality to them, whom he understandably deems to be more literal in their film viewing.

Metaphorical communication breakdown is indeed at the heart of The Banishment, that much is successful.  The powerful performances and artfully composed visuals make this Blu-ray worth picking up, particularly for those with appreciation for his more celebrated efforts, The Return, Leviathan (2014), Elena (2011), and his newest film, Loveless (2017).  If this, being Zvyagintsev’s second film, constitutes his “sophomore slump”, then so be it.  The Banishment, though flawed by comparison, remains worthy of certain inclusion.