ANT-MAN AND THE WASP – Film Review 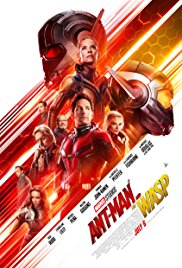 There was a multi-parter on Mork & Mindy in which Robin Williams’ lovable spaceman involuntarily shrunk so small, he eventually found himself in a tiny kingdom.  The kingdom was, for whatever reason, medieval, and inhabited by doppelgängers of the show’s main cast.  By this point in the series, any tension was gone, as Mork and Mindy were firmly in love.  The micro Mindy doppelgänger ends up dying, much to heartbreak of Mork.  Shortly though, it’s time for the episode to end, so he returns to his full size and to Mindy proper.  He tells her something along lines of “When it’s time, I hope I die first; since I couldn’t bear losing you twice.”

When I think of the admittedly rare scenario of someone shrinking down to microscopic size or smaller, that hazy childhood TV memory is the first thing that comes to mind.  Not The Incredible Shrinking Man.  Not Ant-Man.  Mork & Mindy.  It’s a show so corny, so lightweight, so ridiculous in concept, it might as well have not existed.  Except, it did, and one at least one occasion, it left a mark.  Returning director Peyton Reed’s Ant-Man and the Wasp, as small as it may seem alongside of its fellow MCU titans, reaches for such resonance, with satisfying if not mind bending results.

Ant-Man and the Wasp is a nice, healthy respite following the heavyladen events of Avengers: Infinity War, released just a few months prior.

In Marvel’s new and first Ant-Man sequel, we learn more about the incident from over thirty years ago in which former superhero Dr. Hank Pym (Michael Douglas) lost his beloved wife and shrinking cohort, Janet (Michelle Pfeiffer), to an irrevocable microscopic fate.  With his shrinking device malfunctioning, she takes the initiative of shrinking in-between the dense molecules of an incoming speeding warhead, thereby penetrating its otherwise impenetrable outer shell, getting inside, deactivating the thing, and successfully stopping the nuclear attack.  Thousands of lives were saved, but Janet Van Dyne was gone forever.  Or so Dr. Pym thought.

While the rest of the world, presumably including a very young Scott Lang, was looking away watching Mork & Mindy, that was happening in the sky nearby. 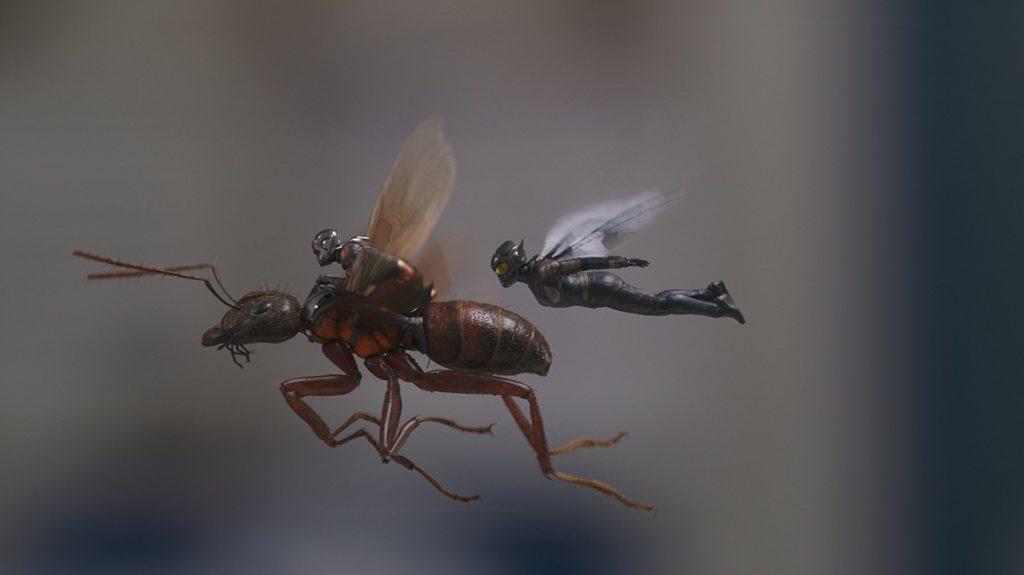 Years later, Dr. Pym would form an irritable alliance with good-natured burglar Scott Lang (Paul Rudd) in the interest of stopping the first film’s villain, Yellowjacket.  In accomplishing that, Scott not only had to hero up as the new Ant-Man, he achieved the impossible- returning from the microscopic “quantum realm”.  As Dr. Pym tells his daughter, Hope (Evangeline Lilly), in the first scene of Ant-Man and The Wasp, that changed everything.  Could it be that Janet is still alive?  Could it be that someone could finally go get her?

That’s the premise of this entire film, the very definition of “delightful summer romp”, by Marvel Studios standards.  (Make that, “Marvel Stud10s”).  Ant-Man and the Wasp, though a bit slow in getting started, proves to be every bit the effects-driven action comedy that its predecessor is and then some.  It’s a nice, healthy respite following the heavyladen events of Avengers: Infinity War, released just a few months prior.  (Ant-Man and the Wasp takes place just prior to the events of that film).

Last time we saw Ant-Man, he was detained following his involvement with the losing side of the superhero civil war (as depicted in Captain America: Civil War).  Since then, he’s been confined to house arrest, allowing him to continue to raise his adorable daughter, Cassie (Abby Ryder Fortson).   As part of the Civil War fallout, Pym and Hope were implicated by association.  They lost that really great old house where so much of the previous film took place, and had a falling out with Scott.  Meanwhile, the security company started by Scott and his three comedy relief ex-con pals (Michael Peña, T.I., and David Dastmalchian) is struggling. 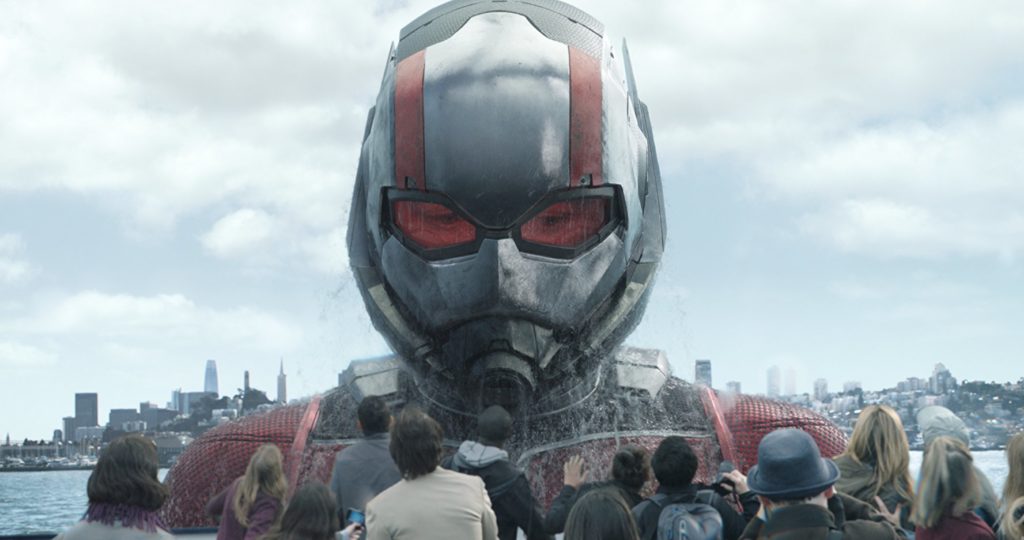 The mission to recover Pym’s lost wife is complicated by the theft of their lab- a feat far more feasible than it sounds, being that it was shrunken down to the size of rolling luggage at the time.  On the case, so to speak, are the reunited Pym/Hope/Scott triumvirate, their relationships nursing deep wounds all around.  Walton Goggins plays a crime lord who’s after the tech inside, as is a new super-powered phasing lab-accident victim turned villainess called Ghost (Hannah John-Kamen), who needs the tech to make herself solid.  Much, much running around and many, many clever scale-based sight gags abound.

Though Evangeline Lilly’s Wasp’s ascension to Marvel’s first female titled character is as competent and butt-kicking as one would expect, this isn’t exactly Wonder Woman territory when it comes to her inner character.  For that matter, the entire cast has figuratively little emotional journeying for the bulk of the running time.  Everyone has at least a moment or two to justify the term “actor”, although for the most part, and more-so than even most Marvel films, they’re expository vessels or gag delivery machines.  And, they know it; no one more than Michael Douglas, who’s content to drift through the majority of the film.  Paul Rudd, though, it must be said, does a fine job once again of shouldering the weight of it all, such as it is.

Marvel Comics’ 2008 “Secret Invasion” storyline culminated with the death of Janet Van Dyne, a long-standing founding Avenger in that version of things.  It was only a few years later when Janet was found alive and well in the micro-verse (the same as the quantum realm, but with rugged cities and Micronauts- essentially a cooler version of the Mork & Mindy micro world).  In that case, Marvel understood that we couldn’t bear losing her even once.

Michelle Pfeiffer’s Janet is not the fashionista of the comics, but rather another scientific genius, mourned widely as a major loss to that profession.  Nevertheless, comics fans should be happy that the original Wasp is, at long last, the focus of one of these Marvel movies, even if she’s off-screen for most of it.  Having actors like Pfeiffer and Douglas so prominently utilized as well as they are in a movie as ridiculously light as this one is a gift.  Kind of like getting Robin Williams and Jonathan Winters hamming it up on a show as disposable as Mork & Mindy.  Even when these talents go small, as the Incredible Shrinking Man once said, there is no zero. They still exist!