You Will Believe Christopher Reeve Can Fly, But This Movie? Not So Much. 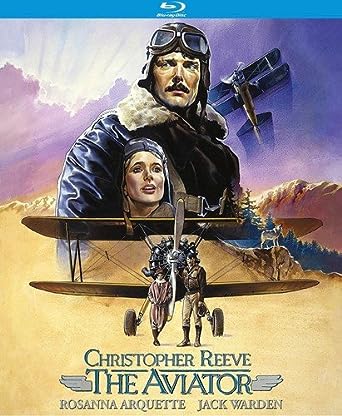 When our friendly neighborhood site editor asked me if I’d care to review The Aviator (no, not the Howard Hughes biopic directed by Martin Scorsese), I demurred as it didn’t sound very interesting to me. Then he sweetened the pot: “It’s directed by George Miller.” Well, now that was a different story! Even bad George Miller (yeah, I didn’t like Happy Feet, and I bounce back and forth trying to decide if Babe: Pig in the City is genius or madness) is still interesting. And watching it will also remind me how good an actor Christopher Reeve can be, even when he’s not wearing a cape.

So imagine my disappointment as I’m watching the movie, and it’s… boring. Reeve does as good a job as I expect, but the film just sort of sits there on the screen and never comes to life. I noted that it had some nice scenery… but that was as nice a compliment as I could muster for it. This was directed by the same guy who gave us Road Warrior, Fury Road and the Nighmare at 20,000 Feet sequence from Twilight Zone: The Movie??

The film just sort of sits there on the screen and never comes to life. The Aviator, based on a book by Ernest K. Gann, is set during the years following World War I, and tells the story of Edgar Anscombe (Reeve), a former army flight instructor who now flies the mail between remote towns in the American Northwest. While he was in the army, Anscombe was involved in a plane crash that killed the student he was teaching. As a result of his trauma, he’s become withdrawn who doesn’t connect well with other people, even the very nice lady who really seems into him- she brings him sandwiches for lunch and everything (she’s played by Marcia Strassman, the eponymous honey from Honey, I Shrunk the Kids).

One day, Anscombe’s boss (Jack Warden) throws him a curve ball by informing the pilot that today, he has a passenger. This turns out to be Tillie Hansen (Rosanna Arquette, Pulp Fiction). Tillie’s dad (Reeve’s Superman IV co-star Sam Wanamaker) is shipping her off to boarding school, where he hopes the young lady will learn some manners. And since Mr. Hansen also owns the airport that employs Anscombe, the pilot doesn’t have any choice in the matter.

Anyway, it should come as no surprise that the plane crashes, and now our odd couple- a veteran scarred by PTSD and a rotten rich kid- have to work together to survive long enough to get rescued. Maybe they might even grow as people due to their shared attempts at overcoming adversity. This bit here is the meat of the movie, and the movie just can’t make it work. We need grilled steak at this point, and it just keeps trying to give us microwaved chicken breasts. It’s apparent pretty quickly that Hansen’s not entirely wrong about his daughter. Both the way she’s written and the way Arquette plays her present Tillie as the worst spoiled brat. I could grant allowances that the filmmakers were maybe trying to make Tillie a modern woman who feels she’s entitled to be her own person, and her old-fashioned domineering father just won’t see her that way- you know, put dad in the role as an antagonist whos increasing attempts at control only serve to drive Tillie into further rebellion. But that portrayal sure isn’t in the text. No, Tillie is the sort of person who won’t listen to anyone who tells her what to do- even when she’s told that maybe smoking cigarettes next to a gas-soaked fuselage made of balsa wood is probably a bad thing. How much patience or sympathy can we have for someone like that?

We need grilled steak at this point, and it just keeps trying to give us microwaved chicken breasts.

The other women characters in The Aviator don’t fare any better. Besides sandwich-totin’ Strassman, we have Evelyn Stiller, played by Tyne Daly (Cagney & Lacey, The Enforcer). Evelyn is married to Jerry Stiller (no, not THAT Jerry Stiller- geez, this movie…), another pilot played by Scott Wilson (the chain-smoking Dr. Temple from The Exorcist III). After the crash, Jerry, naturally, wants to help with the rescue effort. Of course he does, that’s not only his colleague (and his boss’s daughter) stranded out there, but they’re friends as well.  Evelyn, on the other hand, keeps harping on why he doesn’t spend more time at home with her like the whiniest cliche of a nagging wife you could imagine. That’s not a good look, Evelyn.

So what we have here is a movie called The Aviator that’s NOT the one directed by Martin Scorsese, but is directed by George Miller who’s NOT the George Miller who directed the Mad Max movies. Don’t be disappointed, though, by what this movie is not. Rather be dissappointed by what it is: a boring survival adventure film that wastes its charismatic leading man.

The Aviator has been released on Blu-Ray by Kino Lorber Studio Classics. The only extra it comes packaged with is an original theatrical trailer.