Academy Award Winning Director of ONE FLEW OVER THE CUCKOO’S NEST and AMADEUS, 1932-2018

There was no way you were going to convince 13-year-old me that Amadeus was a movie I was going to like. It’s about a classical music composer. It’s an historical costume drama. It’s nearly three hours long. It won the 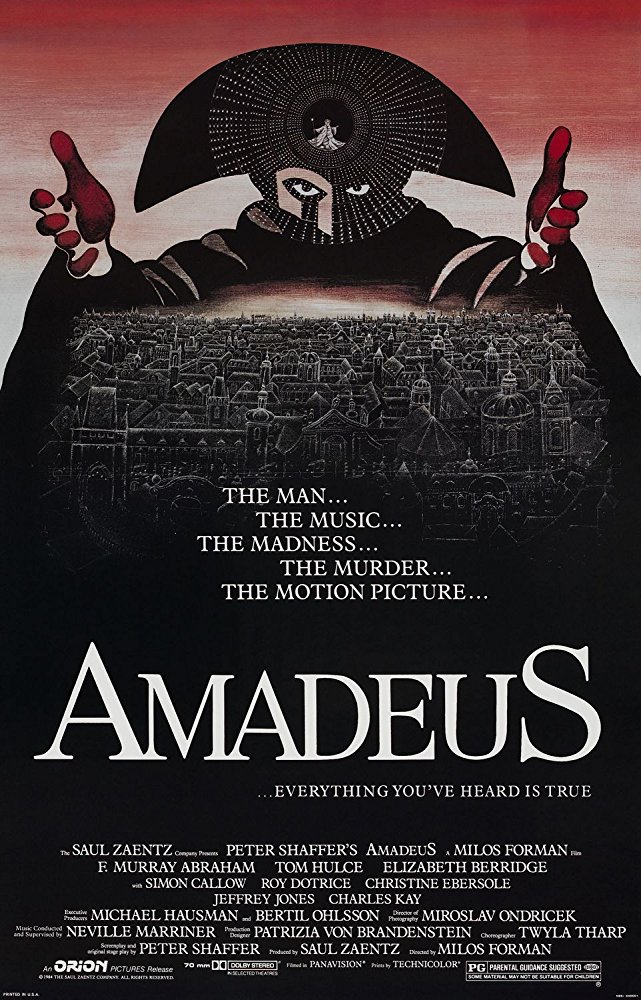 academy award for best picture for crying out loud- and those are never any good! The only way I was going to watch it, was if my parents forced me to watch it.

And thank goodness they did.

Amadeus was probably the first proper grown-up drama I watched and really loved. Even as a kid who only had eyes for space battles, giant monsters, english super-spies, special effects and evil wizards, Amadeus was a sensuous treat for eyes and ears- and as funny and moving and engaging as anything else I was a fan of at that time. And that’s all thanks to Milos Forman.

The movie didn’t spring fully formed from Forman’s forehead, but was the result of an intense collaboration between the director and the play’s original author Peter Schaffer. Amadeus the play is written to be more symbolic and suggestive in its presentation and Schaffer was reluctant to attempt any adaptation. Forman insisted the playwright move forward with the project- seeing the play’s anti-cinematic qualities as a blessing rather than an obstacle. Forman recognized that the two would be less beholden to do a straight adaptation and would have to come up with something that was more of its own thing- something better suited to the big screen.

The final result is a gorgeous piece of cinematic art.

It is also a movie that slots right into Forman’s oeuvre.His Mozart, as both a protagonist and as an antagonist (can a character be both? Amadeus suggests yes) fits right alongside the likes of McMurphy from One Flew Over the Cuckoo’s Nest, and Larry Flynt from The People vs. Larry Flynt. Men with vision, whom authority, society et. al. attempt to block at every turn. They must be blocked either because like Flynt, society doesn’t get or appreciate the vision, or like McMurphy, their vision butts against the way things ‘simply are done.’ In the case of Mozart, its because the authorities (Salieri) recognize the vision for what it is- genius- and can’t abide the notion that this talent has been bestowed on someone deemed unworthy of it.

Forman is drawn to rebels in his works. In a 2002 interview with the AV Club, he said “…I feel admiration for rebels, because I lived twice in my life in totalitarian society, where most of the people feel like rebelling but don’t dare to. And I am a coward, because I didn’t dare to rebel there and go to prison for that. That’s, I guess, why I admire the rebels and make films about them.” 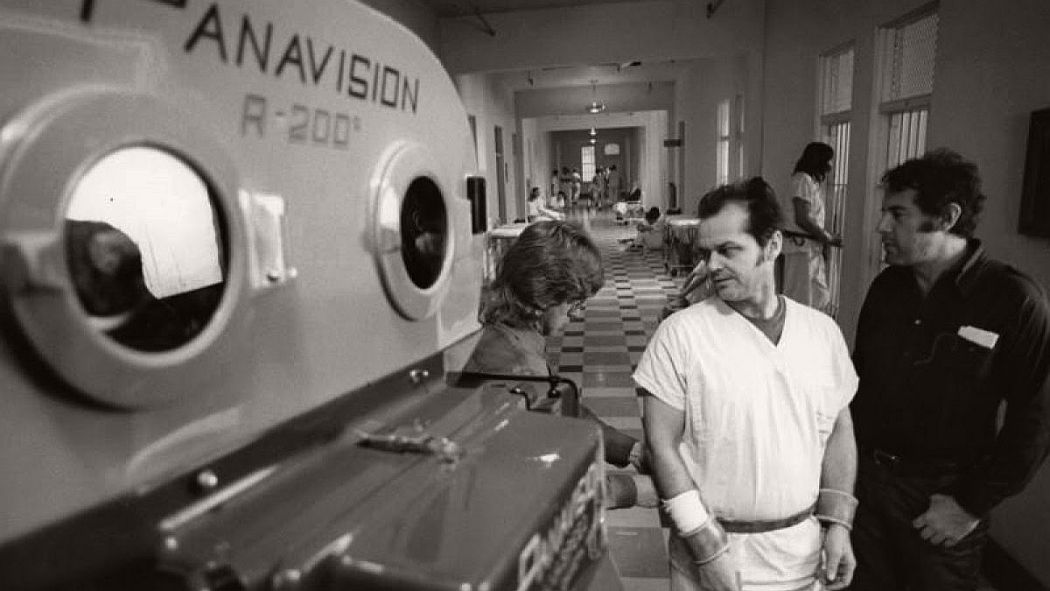 Making ONE FLEW OVER THE CUCKOO’S NEST; with Jack Nicholson.

The rebellions in his films aren’t centered on men wanting freedom for society at large. They just want the freedom to express themselves. If it so happens that the only way Larry Flynt can express himself is through pornography, then that’s what he’ll do- and if he has to take his fight for that freedom all the way to the Supreme Court of the United States- well, he’ll just have to do that too. Andy Kaufman has his own particular tastes in comedy (wrestling women? really?), and if you don’t ‘get’ it, well that’s on you. Mozart wants to write music the way he knows it should be done, and he won’t take your ridiculous criticisms of it lightly (“Too many notes”).

As a filmmaker working in his native Czechoslovakia, which was under a totalitarian regime at the time he was there, Forman knew a thing or two about not being allowed that expression. His movie The Firemen’s Ball  was banned because it was seen as an attack on government competence. When he came to America, he used the freedom that he was previously denied to continue to tell the stories of people who must express themselves in the only ways they can. If that runs counter to what society thinks is appropriate, then its for society to change to suit those men and their vision. We don’t have to like it, Forman says, but we should as a society tolerate it.

Happily, Forman’s own personal expression is more than tolerable. It was art and we as a society are better off for having it. Even if sometimes we have to be forced to watch it. 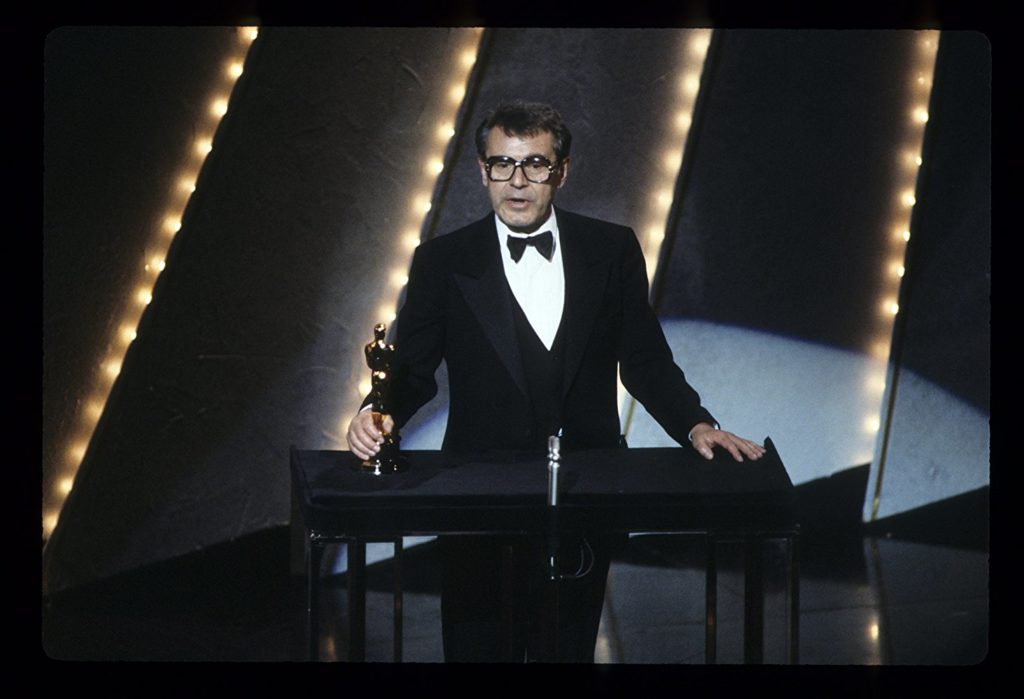 The Firemen’s Ball was my go-to movie after the last presidential election. Forman’s 1967 Czech satire laid out in droll comic terms the abject corruption of an entire governing ethos – in his case, the communist domination of his homeland, but the film easily stands in for any obviously inept collection of magistrates whose political authority openly masks a cynical grab for pleasure. I love the movie for its simplicity – just a tale of happily bumbling firemen trying and failing to organize a successful party for their dying boss.

But underneath the snappy premise, one that takes only seventy-three minutes to complete, there’s a roiling population of leering expectations and wanton pilfering. When the raffle items are stolen and an honest plea for replacing them is answered with more theft, it’s a picture of systemic greed we can all recognize, but when the team of firefighters can’t douse the flames consuming an old man’s home, and in fact cause it to expand by their lack of preparedness, then we’re dealing with tragic incompetence. The look on the old man’s face as he watches his meager possessions snuff out before his eyes is the way I felt that election night. 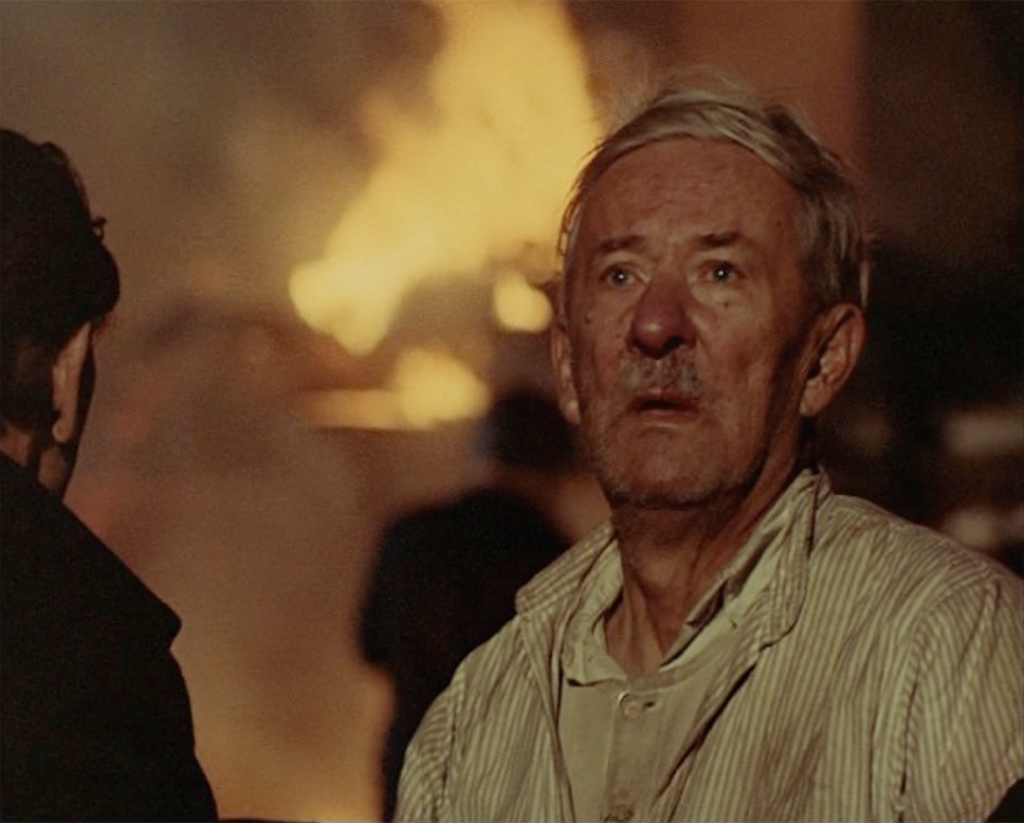 About a decade later, now in the U.S., Forman made a kind of companion piece in One Flew Over the Cuckoo’s Nest. Where The Firemen’s Ball was nominated and lost for Best Foreign Film, Cuckoo’s Nest swept the Oscars for 1975 films (Best Picture, Director, Actor, Actress, Screenplay). It’s a slicker take, in that wonderfully downbeat ’70s way, of the same struggle against harsh masters that don’t always have your best interests at heart. Nurse Ratched (Louise Fletcher) is the strict face of the ruling compound that would snuff the individuality out of an ensemble of irrepressible individuals.

The Firemen’s Ball ends on a note of hopeless fatalism, what hammers down from the power structure above you can only be withstood, even unto obliteration…but from his new American vantage, with its leg room (and bigger budgets), perhaps Forman found solace in the last minute escape from prison. Compared to the stifling determinism at the heart of the earlier film, Cuckoo’s Nest is like a muscly escape into the night. When I think of Forman, I always think of these two movies – movies that grapple with repression and its antidotes. Amadeus is beautiful, but I never think of it as his film in the same way I can never summon Ang Lee and Sense and Sensibility at the same time, and Man on the Moon still bugs me for casting an actual comedian for an actual comedian – could never see past the impersonation. No, for me, perhaps imbued as I am by own Czech heritage (Hornak!), I’m forever pulled toward his dark comedies of political and psychological absurdity.