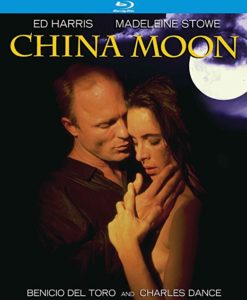 Ed Harris stars as the no-horsecrap police detective Kyle Bodine, a veteran who’s seen it all and then some. He’s the kind of guy who can size up a suspect or situation on the slimmest of details, and be correct. And not even care.

Bodine’s got at least two problems. One, he’s gotten saddled with a wet-behind-the-ears rookie officer, one Lamar Dickey, played by a jarringly young Benicio Del Toro. What a hassle to have to drag this overly tall sack of sensitivities around to puke-inducing crime scenes. And two, he’s fallen hard for married beauty Rachel Munro, portrayed perfectly by a fresh faced Madeline Stowe. Her marriage (to a philandering rich jerk played by Charles Dance) isn’t just rocky, it’s abusive. Before long, Bodine and Rachel, our clandestine couple, have got a dead body on their hands.

Bodine has the benefit of knowing just how to cover up murderous evidence, as well as knowing what the questioning cops will be asking. A self-assured expert in his field, one knows that if this is in fact some sort of modern version of Double Indemnity, or whatnot, Bodine will be no Walter Neff. …Right?

Likewise, our female lead, Rachel, cannot be Phyllis Dietrichson reimagined, as she lacks the Double Indemnity fatale’s outward iciness and pure seductive prowess. Rachel is, for all intents and purposes, a Woman in Trouble. …Right? 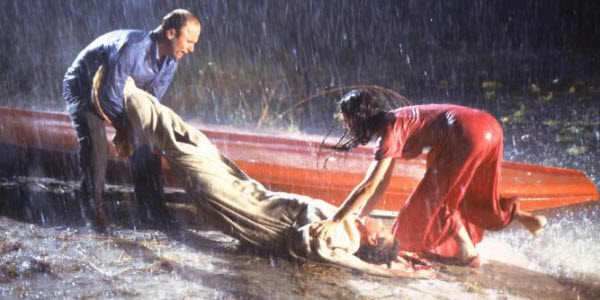 Together, they will dance through their escapade together and make it look as effortless as Fred and Ginger. Except she will be the one to give him both class and sex. What can he offer her? Innocence. Legal innocence, at least.

Released in an age of similarly genred hyper-overt stylistic attention-hogs such as Paul Verhoeven’s Basic Instinct, China Moon emerges as a classier act worthy of re-evaluation.

China Moon turns out to be a very well played Neo-Noir crime thriller, delivering all the juicy twists and turns anyone could want from such a film. Cinematographer-turned-director John Bailey, weaving a nocturnal atmosphere that smolders without viewers realizing it, invites the audience into a sexy crime film, then fakes us out with a cop procedural before finally revealing itself as the full-on Neo-Noir it’s been all along. Released in an age of similarly genred hyper-overt stylistic attention-hogs such as Paul Verhoeven’s Basic Instinct, China Moon emerges as a classier act worthy of re-evaluation. 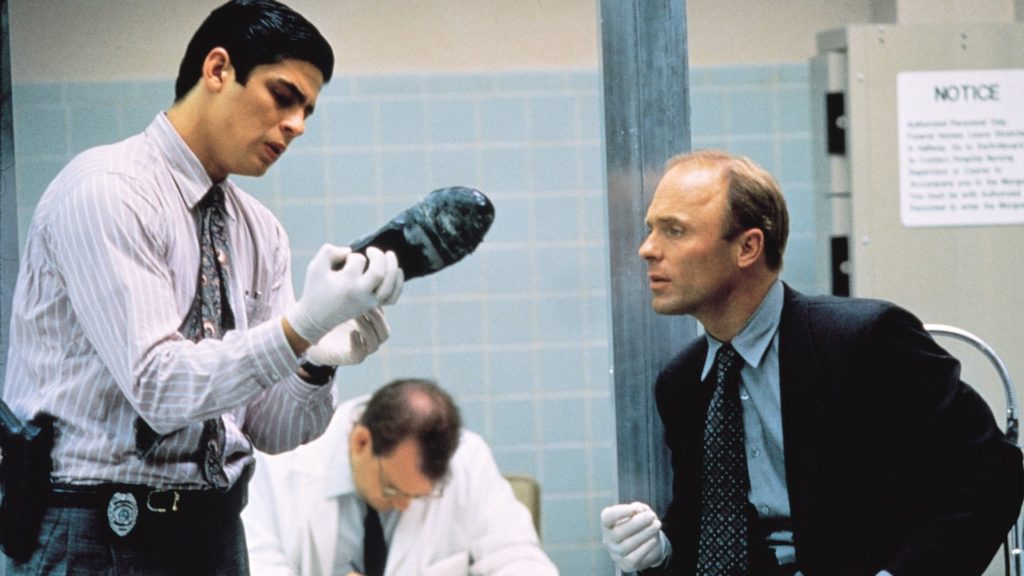 In light of what the movie actually is, then, its title initially strikes one as “off”, the kind of title everyone involved convinced themselves of for lack of anything better. Yet, while it may communicate nothing other than a vague fragile nocturnal quality, if that, the title, like the movie, ultimately works. Bodine, while rowing himself and Rachel to his favorite spot on a isolated lake under a full moon, relays that his grandmother used to call such a moon “a china moon”, since it was big and round like a fine china plate – and that a china moon affects people’s behavior in strange ways, compelling them to do illicit things. A moment later, we witness the sexy apex of the movie, in which Rachel takes Bodine up on his off the cuff endorsement of skinny dipping. He quickly follows, and their secret affair is off and running.

“We don’t get a full frontal of him, too?”, my wife inquired in jest once both characters were relatively concealed in the water. The obvious answer is, “This is a product of Hollywood, 1991 – Don’t be ridiculous.” The in-world justification for both the female nudity and its exclusivity, however, lies in the DNA of its neo-Noir styling. At least since Lawrence Kasdan’s Body Heat steamed up screens a decade prior (which China Moon editor Carol Littleton also worked on), Hollywood had taken to producing a steady stream of such “sexy thrillers”, conceived and marketed on the promise of classic Film Noir illicitness, now infused with R-rated elements that were off the table in the 1940s and 50s.

One could make the argument that these Noir revival films attempt to make for the lack of postwar collective male tension with their blatant surge of more explicit sex and violence, though it’s true that men of every generation are susceptible to classic femme fatale come-ons, and whatnot. Women, too, must understand the temptation to resort to certain manipulations, if only for societal lack of any other immediate recourse. Human shortcomings; begrudgingly relatable, never proud. This is us, in the darkness.

The Blu-Ray of China Moon from Kino Lorber Studio Classics features an excellent optional commentary track by husband and wife co-workers on the film, John Bailey (the director) and Carol Littleton (the editor). Listening to them comb through their film moment by moment is a treat, with Bailey detailing the intricacies of the minor camera moves, and Littleton primarily focusing on the writing. Both love to point out the nuances of their fine actors, as well as the many idiosyncrasies brought to the table by Benicio Del Toro. All the while, China Moon plays out beautifully in terms of picture and sound.

A side detail, the initial packaging incorrectly cites the film’s release year as 1994 rather than 1991. Package designers, too, are only human.