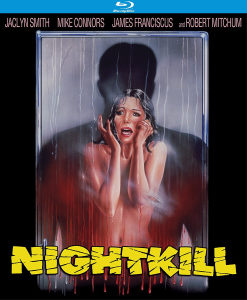 Nightkill, by my count, is the second of two Kino Lorber Studio Classics releases the same month to cast Charlie’s Angels stars as leads whom are physically and mentally tortured. In 1984’s The Burning Bed, sex symbol Farrah Fawcett went battered and bruised to tell the difficult true story of a domestically abused women. The Burning Bed proved to be a risk worth taking for Fawcett, as the made-for-TV movie itself brought a very real social problem to the water cooler.

Fawcett perhaps learned a lesson from fellow Angel Jackyn Smith’s turn in the tepidly deranged murder thriller, Nightkill. In the would-be feature film, which resembles a made-for-TV movie in nearly every way – including the fact that it ended up getting dumped to premiere on TV – Smith casts aside the fashion sense and self assuredness that made her famous in order to play Katherine Atwell, a wealthy woman inexplicably put through a deadly wringer of crime film and horror tropes. By the end, Smith will be rendered violently blistered and burned, whimpering naked on the bathroom floor barely able to speak. Katherine may survive as the victim of this ham fisted whodunnit, but her outer appearance and dignity are pointlessly destroyed. Roll credits.

Nightkill, if you haven’t gathered yet, is a glass of sour wine from a crappy year.

Ordinarily I’d never reveal a film’s ending in a review, but honestly, this comparative angle is the only hook to hang this piece upon. (Also, in this case, the fate of Smith’s character is far from the film’s most essential reveal, anyhow; that being the identity of the murderer). Nightkill, if you haven’t gathered yet, is a glass of sour wine from a crappy year. Smith, clearly reaching beyond her televised type, cannot carry this bit of soggy proto torture-porn. When, early on, a stoned Robert Mitchum, playing nosy police detective, has our protagonist on the ropes, there’s a dread feeling of just how poorly Smith and company are treading water. (Yes, screen legend Robert Mitchum is in this. Hope the check cleared.) 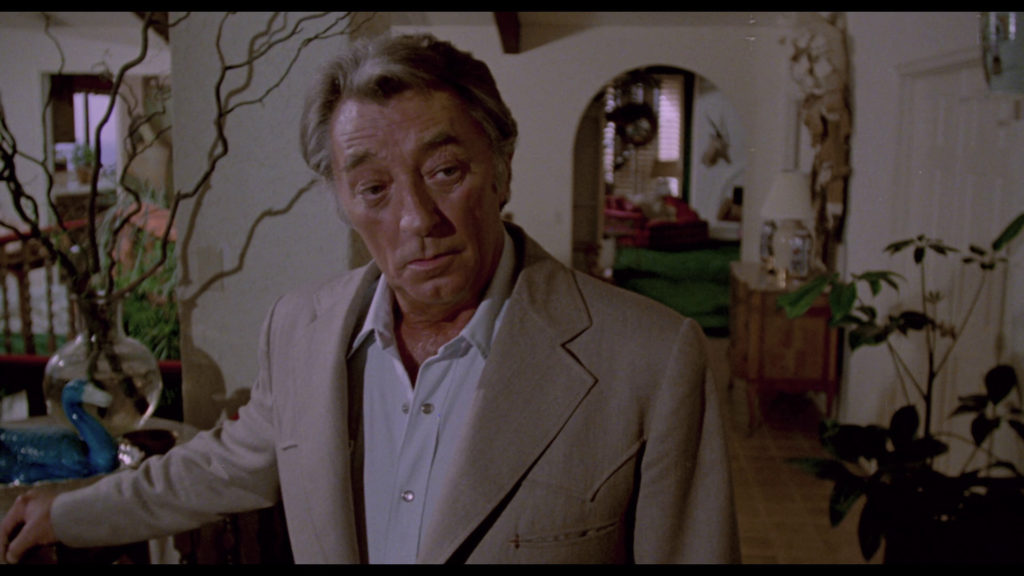 In terms of explicit content, Nightkill plays it safe throughout, withholding any all potentially exploitative ways to tell this lurid tale. Despite multiple murders rooted in sexual infidelity (Katherine is cheating on her wealthy jerk of a husband with a jilted underling, all the while pursued by another wealthy drunken groper) there’s very little blood, and zero nudity. Honestly, director Ted Post showcases more disturbing violence in Beneath the Planet of the Apes, also starring an abruptly disposable James Franciscus.

Though these characters are all supposedly rich, their digs and attire strike one as merely upper-middle class, dressed to convince audiences of a wealthy facade the production simply could not facilitate. The Los Angeles home is darkly lit and overstuffed with arbitrary knickknacks and the world’s ugliest overstuffed furniture. The clothes are a step down from Charlie’s Angels. It’s difficult to discern whether Nightkill, in terms of production design, is over-decorated or not decorated. In both plot and decor, this is a very, very ugly film.

Following the failure of this movie, Jaclyn Smith would return to her hit series for one more year of competently infiltrating beauty pageants in order to take down a gangster, or whatever is it was that Charlie’s Angels did from week to week. As for Mitchum, it’s safe to say this didn’t ruin him, either. His Hollywood legend previously secure, the venerable laconic star would continue to work quite regularly until shortly before his death in 1997 at the age of 79. In that time, The Night of the Hunter and Out of the Past leading man was in the epic TV mini-series The Winds of War, Jarmusch’s Dead Man, Scorsese’s Cape Fear remake (paying tribute to his killer turn in the original), and, well, The Ambassador. They can’t all be home runs. 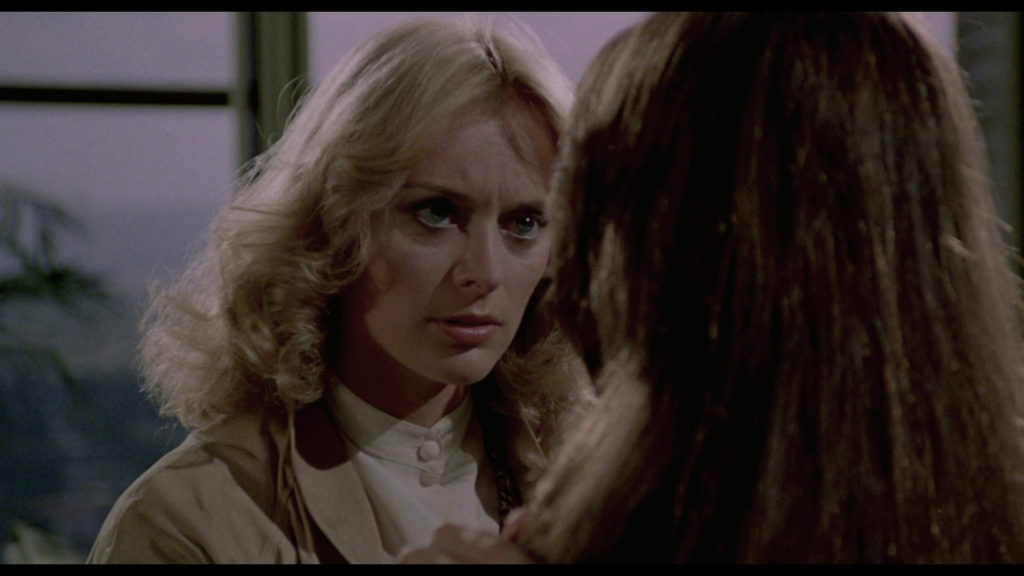 The audio and visual quality of the Blu-Ray, quite frankly, is no great shakes, but then again, I don’t blame the producers for not sinking a lot of money into a full-blown restoration. At times, there’s a greenish kick to characters‘ faces, a lighting choice that, considering this boasts Director of Photography Anthony Richmond (Don’t Look Now), couldn’t have been intentional. At other times, the audio track is distractingly scratchy. But, fans of this film (there are fans of this film, yes?) will be happy to know that both of those examples occur two or three times. Still though, it’s not great.

There’s a commentary track with not one but two film historians, Howard S. Berger and Nathaniel Thompson, mostly saying nice things about the movie. Well informed and eloquent, Berger and Thompson go on at length about how prolific television and film director Ted Post is slyly utilizing the blah televisual aesthetic- that he helped coin in his decades of work – to lull viewers of Nightkill into a false sense of security. A positive take if there ever was one, though it can’t be denied that these historians know their stuff. The commentary is jammed packed with interesting information and trivia – more enjoyable than the film they’re talking about. I, for one, was with them up until they equate Nightkill with “a Tarkovsky thriller”.

Jaclyn Smith also turns up in the blu-ray’s bonus features giving a new interview about this, her first feature film. Her recollections are mainly positive, simply skirting over the disappointment that she and others must’ve felt when it failed to get the theatrical run that it was supposed to, and instead did in fact go straight to television.

Though a warped tale from an uneasy time, don’t let the cover art fool you – this is no hard-R rated slasher horror picture. Tepid and kind of embarrassing the whole way through, Nightkill, though it prominently features a brutal shower attack at its apex, this is no Psycho. It’s a film that strains to be Hitchcockian without the hitch nor the cock. 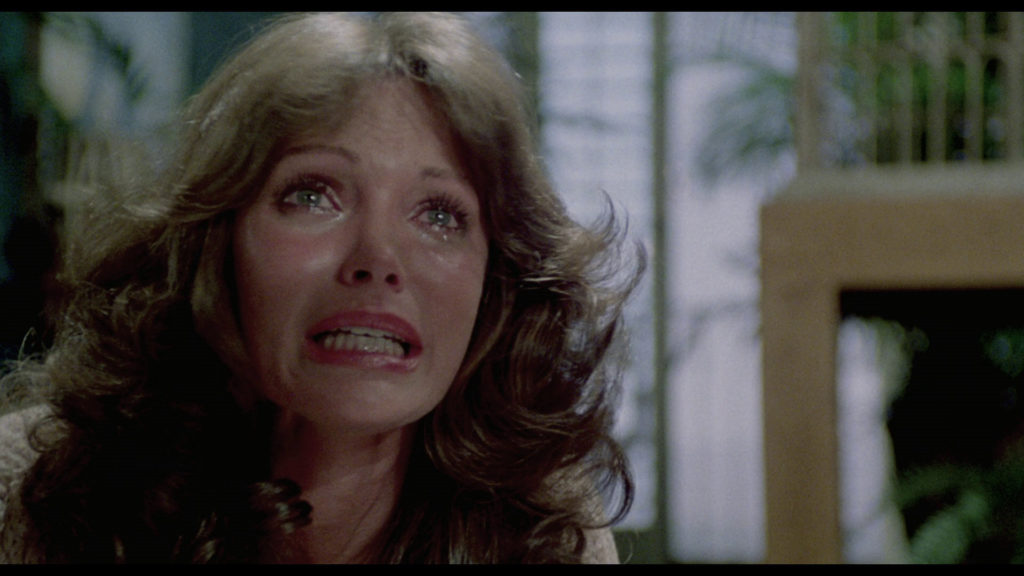