Hope Floats To Paris, Loses Something In The Translation 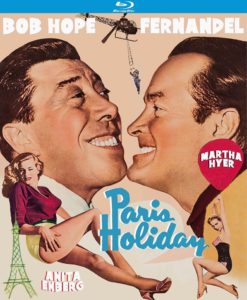 The voices singing over the opening credits assure us that every day’s a Paris holiday. If they mean that what we’re about to see feels like it’s five weeks long, as decreed by French government mandate, they’re close. It’s not that the movie doesn’t have its charms, it’s that those charms are few, far between, and fleeting, making this a Bob Hope movie for completists only. Hope plays a veiled version of himself, Bob Hunter, a popular comedic actor traveling in Paris, there to meet a screenwriter (played in a single scene by the great Preston Sturges), in the market for the writer’s latest hot property. Simple enough, but meanwhile, a corrupt wing of the French government is after the script, thinking the subversive writer’s used the story as an expose of their illegal activities – and now they think Hope has the manuscript, so they’re determined to kill him for it. Yeah, it’s murky, a stumbling attempt to refashion Hope’s old My Favorite-style scrapes in the mold of a Cold War spy thriller. But leaden comedy bits like hired thief-assassin Anita Ekberg trying to remain undetected in Hope’s state room paints a desperate picture of characters literally in search of a script.

Produced by Hope’s own company, Tolda, in the bitter wake of his falling out with Paramount over salary disputes, Paris Holiday was likely nothing of the kind – as acting money-man (“produced by Mr. Robert Hope” says the credit), you can often see the phantom strain of money matters hanging over his usually affable coward character. The movie also arrives on the relative heels of Hope’s two only ventures over the range from comedy to straight-ish dramatic bio-pics (The Seven Little Foys and Beau James), and one can sense producer-Hope struggling to deliver something that measures up to that level of gravitas, going so far as shooting it in glorious “Technirama”, the same widescreen process used for big-event historical dramas like El Cid, Spartacus, and King of Kings. He wasn’t going to fill up that giant screen with this vehicle, so clotted with muddy international intrigue and – the saddest loss – a forced-feeling onscreen pairing with France’s biggest comedian at the time, Fernandel, that never ignites. Their scenes start off contentious by design – Fernandel is also playing a star comedian, so it’s an ego tit-for-tat, but nothing they do to join forces story-wise can survive Fernandel’s non-existent English skills. There are plenty of Hope quips along the way, mostly in his patented, tossed-off understatement (“Are you traveling alone?” “Yes, but I’m not gonna be stubborn about it.”), but they exist on the tremulous bubble of a story that floats between urbane and sexy without being either in any abundant measure.

To its credit, the movie tries something new: in the opening sequences we get individual character exposition via internal monologues. Unfortunately, the idea as executed requires awkward moments of actors simply standing quiet and still in front of the camera till their monologue is done. It’s just the first of many misfired half-ideas. Maybe the only thing to make the film worthwhile is that single scene with Preston Sturges. It’s a bit of sly commiseration on Hope’s part to cast Sturges at all. He’d been Paramount’s golden boy of the ’40s (he wrote and directed the megahits The Lady Eve, Sullivan’s Travels, a handful of others) until he had a falling out of his own. The sight of Sturges, in exile in France, still churning out scripts of quality enough to lure the likes of Hope clear across the ocean, even if fictionally, is a bit of a tweak to the executives at that studio. But it’s maybe an ocean too far for the audience as little else lives up to the promise of the premise. Then by the time we’ve got Fernandel in drag we’re in no man’s land, comedy-wise, and yet there’s still ten minutes to endure of Hope hanging from the end of a ladder hooked to a runaway helicopter. It’s not that these scenes couldn’t be funny, but they’re just not, even for this die-hard Hope fan. There’s a real sense that after his dust-up with Paramount, he shouldn’t have made Paris Holiday, but gone on one.

The Kino Lorber Blu-ray contains no extras, commentary track or otherwise. The images in this review are not representative of the actual Blu-ray’s image quality, but are included only to represent the film itself.